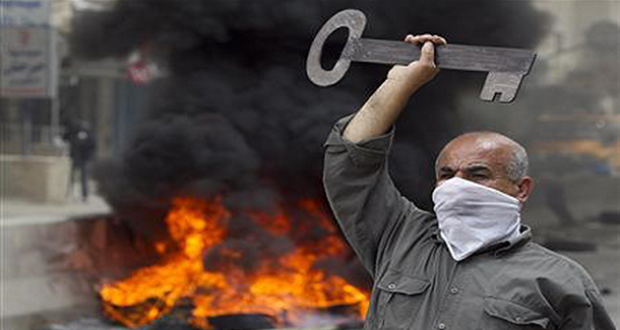 As Palestinians commemorated the 63rd anniversary of the Nakba, Israeli forces opened fire at several demonstrations killing at least 14 unarmed people. The Nakba of 1948 marks the loss of Palestinian land to the Zionist militia who then set up the state of Israel on Palestinian land.
Ismail Patel, Chair of Friends of Al-Aqsa stated: “The use of such brutal force by Israel is a disgrace. This is no different to the brutal repression we have witnessed by other dictators in the region. The international community needs to ensure that it responds appropriately.”
He further stated: “The Nakba marks the catastrophe for Palestinians when they were robbed of their homes, livelihood and land and they have every right to protest against this.”
Hundreds are reported to have been injured including at the Qalandiya checkpoint between Ramallah and Jerusalem where over a thousand Palestinians demonstrated and 40 are reported to be seriously injured suffering bullet wounds. On the Syrian border dozens more were injured. On the border with Lebanon Israel killed ten Palestinian refugees and wounded a further 100. Israel also shelled demonstrators in Gaza killing 1 and seriously wounding 30.
Notes:
Sources: www.islam21c.com, taken from www.foa.org.uk

Islam21c requests all the readers of this article, and others, to share it on your facebook, twitter, and other platforms to further spread our efforts.
2011-05-17
Friends of Al-Aqsa
Previous: The Injustice of Usury
Next: Darwin’s Displacement of Religion or Grounds for a New Religious Experience