#NotreDame: Why is it that bricks matter more than bones in today’s secular world? 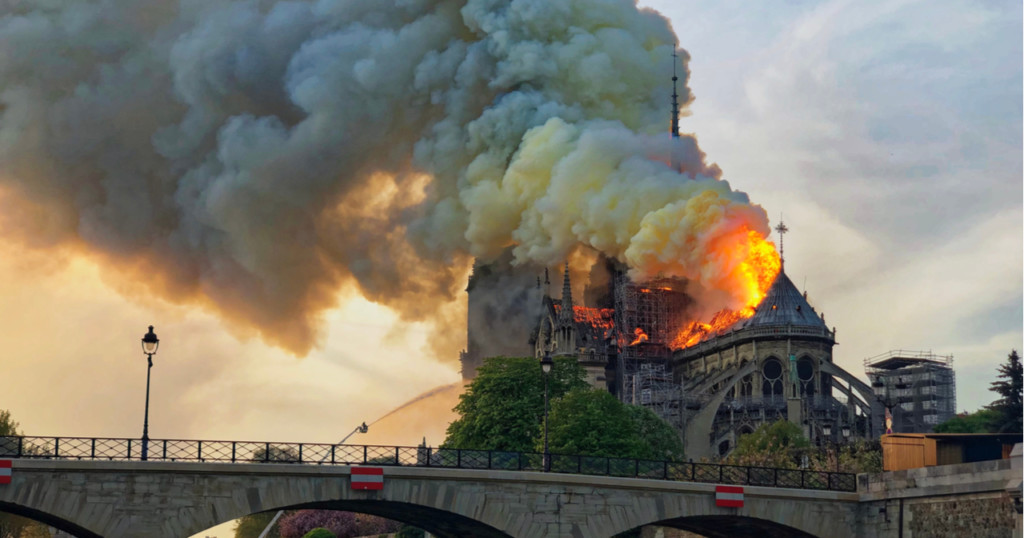 The devastation of Notre Dame Cathedral has left me troubled.

Not because I felt any personal loss. I did not. I felt no pangs of emotion.

Do not get me wrong; I felt no joy at seeing a historic building consumed by flames.

Indeed, it is a humbling thought, that a building that took 200 years to build and stood for several centuries, despite war and occupation, was then destroyed in minutes — a reminder of the ephemeral nature of all things in this world.

But whilst I felt no personal loss, I do appreciate that the people of Paris will have felt the loss of one of their most prominent buildings, as will those who took it as a place of worship.

It is not the response of Parisians or Christians that troubled me.

It is the reaction of the secular elites throughout the media, rallying people to worship at the altar of their ‘religion’, and the failure of some Muslims to rise above the media echo chamber, spinning a narrative about the events in Paris.

As I watched the events unfold, I wondered, what was it that provoked TV news anchors to be on the brink of tears or to look as if they were in mourning?

But across the English Channel, it is the secular tradition of celebrating of art and architecture, associated with European notions of ‘civilisation’, that has generated an emotional response. One commentator described the Cathedral as a “witness” to centuries of human history — reminding people that art and architecture endure longer than most of our lives. From a secular perspective, this celebration of something that endures longer than us is a substitute for celebrating something eternal.

We see these facets of the secularist creed playing out periodically when populations feel ‘spiritual’ and reverent at times of loss. Today, it is Notre Dame. Yesterday, it was David Bowie. Before that, Princess Diana. Each one represents a collective manifestation of the desire to worship or revere something, channelled towards one of today’s many ‘gods’, whether that is the nation state or the love of the art and architecture.

To be clear — to feel sadness at the loss of a beautiful and meaningful building, or a prominent individual is not necessarily a problem.

However, it is when you see hypocrisy and an utter lack of proportion that you feel forced to comment.

The hypocrisy is obvious. The reactions from world leaders — leaders like Macron, Trump, Obama and May — who mourn the loss in Paris but have been complicit in so much destruction, such as the destruction of lives and buildings in Syria, Yemen, and Libya, to name just a few. For them, a burning building in Paris is tragic, though not one they burned themselves in Afghanistan. In their book, “fire and fury” is okay when it is for your own strategic interests. These are leaders who might call for donations for Notre Dame but not for the people who live in one of Paris’s many ghettos. They mourn a Cathedral more than human beings dumped in a place called ‘The Jungle’ in Calais, or on the other side of a wall in Mexico.

What is not always so obvious to sense, when people find themselves in a media echo chamber, is the lack of proportion generated in the collective grief.

Consider this: no one died in this fire, thank God. Yet, the response of the secular media is at least as large as their response to the Grenfell fire, in which at least 72 people died. Donations for Notre Dame totalled €800 million just 48 hours after the fire, but the victims of Grenfell fire have not yet been rehoused.[1]

In some ways, the double standard explains the response to some other historic matters. The Taliban destroyed the Bamyan Buddhas, not because they were idols being worshipped, but because the UN was spending money on their preservation whilst the people of Afghanistan were starving. I do not say it was the right way to address the issue, indeed it did not achieve the intended aim of the protest but instead brought criticism and accusations of religious extremism. But it was provoked by the sense that stone mattered more than people.

If you doubt what I say about the disproportionate response, ask yourselves why, after the destruction by ISIS in Palmyra in Syria, it seemed like antiquities mattered more to the world’s secularist elites than the atrocities of the Assad regime in taking human life, as well as those of other factions in the conflict, which should have dwarfed concern for historic antiquities. Yet, reading the commentary on Palmyra was like reading a news report about a group of thugs breaking into a house, murdering its inhabitants, and destroying its contents, including a precious vase and then seeing a headline: ‘Priceless vase destroyed in criminal attack!’.

Our priorities in Islām are unequivocal — human life is more important than any building.

For Muslims, there is no building more beautiful or revered than the Kaʿbah in Makkah. It has been destroyed and rebuilt in the past, but our Prophet (sall Allāhu ʿalayhi wa sallam) taught us that the blood of a Muslim is more valuable than the Kaʿbah!

So, it saddens me that, in this environment, the response of some Muslims — who ought to be able to spot the hypocrisy and the lack of proportion — has been to simply to parrot the response of the secular media and join in a collective grief that seems hollow and manufactured.

There will be a few whose sympathies are a genuine gesture of goodwill, addressing the sense of loss for Christians or Parisians. But one cannot help feeling that more have become so cowed by the pressure of the hostility they face, that they feel they have to shout to be heard and accepted by the secular elite.

There may be a few who are genuinely fascinated by Gothic architecture and medieval Christian buildings, but when the commentary is made is from thousands of miles away, it sounds more like a colonised mind saying what he thinks sounds ‘civilised’.

But if we had genuine confidence in the values of Islām, we would offer an honest word at such a time. Not to disrespect those who have reason to feel sad, but to provoke some thought about the double standards of world leaders who have wrought destruction in other people’s homes, or ask people to consider why it is that today’s world seems to value material artefacts more than it does human souls.