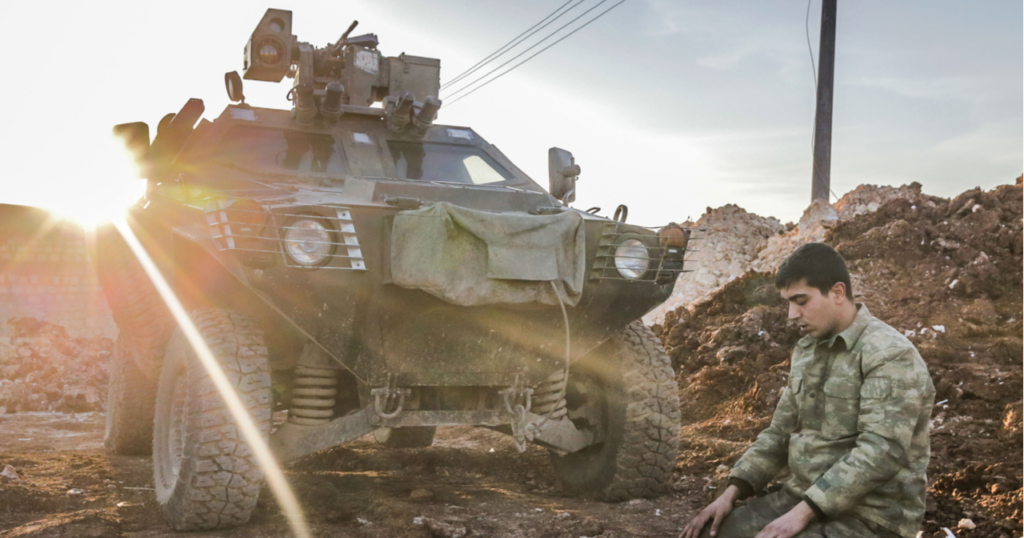 Just three days after the US pulled out from northern Syria, Turkey launched a major military operation aiming to defeat PKK-linked paramilitary forces and militias. The operation also seeks to establish a safe haven for millions of displaced Syrian refugees to finally return to their homes, as well as to create a 30km-wide safe zone to clear the Turkish border along the northern Syrian border.

The Syrian revolution in 2011 led to a brutal crackdown on protestors. The relentless directives to shoot protestors led to thousands of military-men defecting and involuntarily transforming what began as a nationwide peaceful plea for democratic political reform to all-out warfare. Lip service by the US against the Assad regime, calling for him to step down in 2011, never developed into any real punitive action.

This continued, even after the regime crossed a ‘red-line’ imposed by the Obama administration by attacking civilians with chemical weapons in August 2013.[1] International apathy towards the regime, Iran and Russia’s active military support of the regime, and the harrowing accounts of torture, rape, and mass-murder began breeding isolated and disenfranchised cults of extremist-leaning, including ISIS. It was against this symptom that the US, assisted by a number of Arab and foreign governments, formed their pretext to intervention.

In 2015, a militia dominated by the PKK-inspired Kurdish People’s Protection Units (YPG) was formed with extensive US backing. The militia was always recognised by the US as an extended arm of the outlawed PKK terrorist group, responsible for thousands of deaths inside Turkey. Its separatist ambitions along the southern Turkish corridor paved common ground with the aims of the intervening forces: defeat ISIS and eradicate Syria of many of its Islamic-leaning rebel factions (themselves instrumental powers against ISIS) concentrated in northern Syria. But much to the surprise of Syria’s rebels, the coalition by the US and Arab countries, and dare I say Russia, spared none save the regime and its YPG brainchild.

Since then, fact-finding missions by international human rights organisations uncovered waves of forced displacement and home demolitions amounting to war crimes by the US-backed YPG. Entire villages, primarily Arab, were razed by the YPG under the watch or assistance of their US counterparts.[2] Naturally, scores of civilians alongside those emerging from other parts of Syria flooded into Turkey, which was not only beset with up to four million destitute Syrian refugees, but had to deal with an extending PKK territorial vein across the width of its southern border created by its ‘allies’. Who needs enemies?

Turkey has since become the largest provider of humanitarian assistance to Syrian refugees,[3] embracing an ‘open-door’ policy and housing them both inside Turkey and in enormous organised and supported camps. Most countries around the world have instead dubbed the handful of migrants who would dare to cross the Mediterranean and Aegean seas as a ‘crisis’,[4] an ‘invasion’,[5] and a ‘swarm’[6]. These countries have focused more on measures to keep these refugees out, disregarding the fact that some have drowned or disappeared.

The problem with Turkey was never with intervention or invasion. Intervention in Syria has been done by the United Kingdom, France, Jordan, Turkey, Canada, Australia, and others. The US, UK, and France have been present on the ground for years in northern Syria. The problem with Turkey, as always, is that it is Turkey, a Muslim nation that is intervening independently, seeking a resolution to a systematically concocted problem. The PKK, despite being listed a terrorist organisation in all of Europe and the US, must exist in northern Syria not to defeat ISIS, but to sever the Turkish bloodline to Syria.

Within hours of the intervention, the foreign ministry of France summoned the Turkish ambassador to Paris, Ismail Hakki Musa.[7] The High Representative on behalf of the EU European also slammed Turkey’s operation as undermining the stability of the whole region.[8]

Clearly, for France, it does not matter if one terrorist is pitched against another, but only if the terrorist being pitched is of the right type, i.e. an un-Islamic, secular one. Otherwise, the US, UK, and France must as well have backed HTS (a conglomerate of Islamic factions who took the fight against ISIS to an extraordinary level). The HTS and ISIS were both pounded to near obliteration, but the YPG was spared.

Take a deep breath … even the ‘formidable’ Arab League is convening in Cairo to “discuss Turkish aggression on Syrian territory.” The onus should have been on the Arab League to repatriate the four million Arabs at the behest of the Syrian National Coalition (now in the Arab League) against the suspended Syrian regime from the Arab League. Perhaps the Arab League should convene for Yemen, an Arab country that is all but obliterated by the monarchs of the Gulf. In President Erdogan’s own words:

“Saudi Arabia should better look in the mirror. Who is responsible for today’s conditions in Yemen? Were tens of thousands of people not killed … Egypt, just you wait. You have no right to speak!” Censuring Egypt’s killing of democracy in 2013 by ousting the country’s first democratically-elected President Mohammed Morsi, President Erdogan said: “You did not even allow his family to bury him. You are murderers.”[9]

The message that the world continues to send is that Turkey shall be damned for housing refugees, damned for seeking international assistance, damned for supporting Syrian rebels seeking democratic transition in Syria, damned for fighting a Marxist-Leninist militia, damned for its open-door policy towards Syrians, and damned for taking military action to repatriate them. For some to accuse Turkey of seeking to “change demographics” by repatriating Syrians[10] back to their hometowns is a bit of an embarrassing admission of ignorance, if not condemnable misinformation. The irony is that the terrorist militias being praised by these same commentators were the ones trying to change demographics by killing or driving out the Syrians in the first place.

Maybe more revealing is how Europe is biting its fingernails at the prospect of  needing to help some people escape a war that they are participating in. In a statement to his party, President Erdogan said: “If you try to frame our operation there as an invasion, our task is simple: we will open the doors and send 3.6 million migrants to you.“[11] The response to this statement was that it was seen as a ‘threat’ in response to ‘criticism’. Relax. It would be foolish to still expect Europe to be part of the solution. President Erdogan is simply saying ‘if you insist on doing nothing and bearing no share of the problem, stand back, end the arm-chair criticism, and do not stop us from solving it ourselves. Whilst time has shown that the ‘democratic’ world’s romantic support for Syria’s revolutionaries from 2011 was nothing but lip service, to then take a figurative Turkish ‘threat’ so seriously shows who the world continues to identify as integral and honest. Why should anything less be anticipated from a promise?

“Turkey has no interest in anyone’s land, property or wealth. Similarly, the Syrian National Army, which acts with Turkey, has no such intentions. We as Turkey guarantee that even the slightest disorder will not be allowed. I would like to call on our Syrian brothers and sisters who have been forced to join the YPG. We will welcome all, whether they be an Arab, a Kurd or from another segment, who will leave the PYD and take action to protect their homes, villages, cities and honor … We plan to build new residential areas with the capacity of housing 1 million people for those who will return to the area and have no home, and we plan to build it with the international community’s funding.”[12]