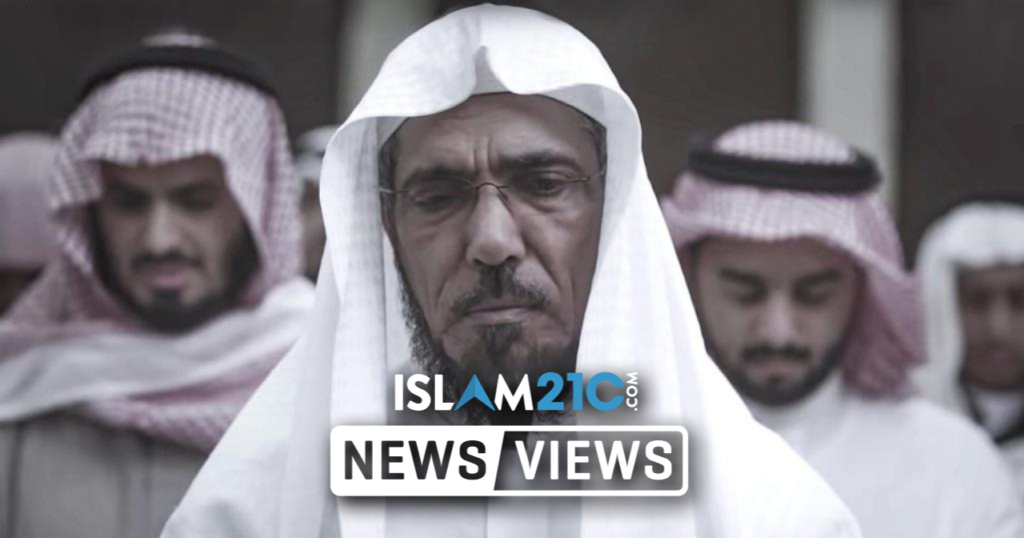 The Saudi Criminal Court has delayed the verdict of Sheikh Salman al-Odah without giving any reason or further details, according to the advocacy group Mu’taqilī al-Ra’ī‘ or ‘Prisoners of Conscious’. [1] The verdict is now scheduled to be delivered on Wednesday 30th October.

Prosecutors in Saudi Arabia have sought the death penalty for the prominent scholar, following an apparent secret trial in August 2018. [2] His son Dr Abdullah confirmed that the well-known scholar is said to have faced 37 charges, [3] which according to London-based rights group Al-Qist, included incitement against the ruler and spreading alleged ‘discord’. [4]

The Sheikh is believed to have been arrested after he tweeted a duʿā to his 14 million followers in support of what he interpreted as reconciliation with neighbouring Qatar: [5]

Saudi Arabia and several other Gulf states severed diplomatic ties with Qatar in 2017. [6] The move followed a visit by the US President Donald Trump to Saudi Arabia in which members of the Gulf Cooperation Council (GCC) vowed to tackle ‘extremism’ and its sources of funding.

According to Trump, this is ‘already paying off’. [7] Qatar hosts a number of exiled Hamas leaders, as well as scholars and activists from the Muslim Brotherhood, many of whom have been sentenced to death in absentia by Egypt’s coup regime. The boycott on Qatar has separated families and seen the unprecedented arbitrary detention of activists.

The prominent Saudi-based scholar was arrested without a warrant from his home only a few hours following his tweet. He was subsequently placed in solitary confinement after he refused to obey an order made by the Saudi authorities to tweet in support of the Saudi-led blockade against Qatar. [8] The Sheikh remained in solitary confinement for nearly five months afterwards before eventually being hospitalised. [9]

The Sheikh, who studied under notable scholars such as Ibn Baz and Ibn Uthaymeen, is well-known throughout the Muslim world for his works, which include hundreds of articles, publishing 53 books and formerly supervising renowned website IslamToday.net. [10] He is seen as a highly influential voice with millions of followers on social media. Recently, the Muslim500 published its revered list of the world’s 500 most prominent figures in 2020. The list featured Sheikh Salman al-Odah as the 10th most influential Muslim. [11]

The Saudi kingdom has witnessed drastic changes in the past few years. In only the last two years, the Saudi authorities have arrested scores of scholars and activists in what is seen as a significant shift in internal policy led by Crown Prince Mohammad b. Salman. The measures have been dubbed by some as a precursor to introducing more secular-leaning laws. [12]

Prosecutors in Saudi Arabia have arrested scores of prominent scholars but have even sought the death penalty for some of them including, Sheikh Salman al-Ouda. [13] Amongst the dozens of prominent scholars, activists, and academics arrested by the Saudi authorities are Sheikh Awad al-Qarni, Sheikh Mohammad Musa al-Sharif, Sheikh Muhammad Saleh al-Munajjid, and Sheikh Abdul Aziz at-Tarefe. [14]