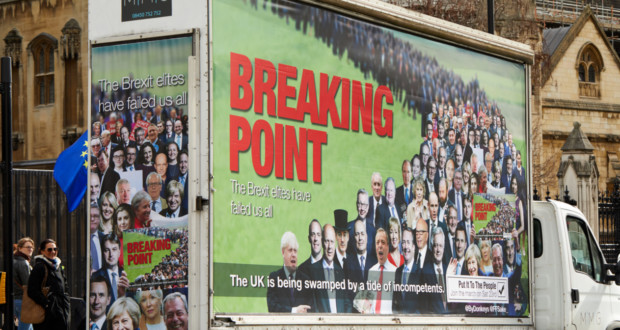 Racism in the UK Runs Much Deeper than Brexit

Brexit is exhausting. It has become such a dominant and polarising issue. Three years ago, the UK’s decision to vote for Brexit might have been the answer to a simple question: in or out? But since then, the matter of how to leave the EU has turned out to be a great deal more complicated and has led to nowhere useful. The sad reality is that the political vacuum arising from the Brexit referendum appears to have lowered the quality of political discourse, creating room for new populist political movements that are even more powerful than mainstream parties. The most obvious example of this is the recent rise of the right-wing populism of Nigel Farage, with its starting point reflected in UKIP’s wins in the 2014 European Parliament elections, leading to the Tory offer of a referendum that eventually led to Brexit. Dubbed as an effective demagogue of a generation, Farage set the racist agenda concerning Brexit.

The first point to acknowledge is the centrality of racism to—now mainstream—Brexit arguments. There is no need to downplay racism’s hold in Brexit Britain any longer. Farage’s infamous and xenophobic ‘breaking point’ anti-immigration poster symbolically reflected his modus operandi. Far from impeding him, his sanitised and more ‘polite’ brand of racism became his ticket to success. The Brexit referendum thus emboldened racists and led to increase in violence against immigrants and BAME communities. Controlling immigration became a euphemism for xenophobia and racism. The increased incidence of post-Brexit hate crimes in the UK showcased two conclusions. The first was that there exists a link between Euroscepticism and racial or bigoted animus. The second conclusion was that hate crimes against all marginalised groups spiked; some of these groups were not even directly related to Brexit. The Brexit vote should have been a peaceful way to exercise concern for the United Kingdom’s relationship with the EU. As it turned out, for some it became a mandate for hateful behaviour. [1]

Thus, in the present context, racists are feeling increasingly confident in deploying overt abuse or discrimination. This is reflected in a survey by Opinium, quoted by The Guardian. Today, 7 in 10 ethnic minority individuals report having faced racial discrimination, compared to 58% before the Brexit vote in June 2016. Omar Khan, the chief executive of the race quality think tank Runnymede Trust, said it was now clear that Brexit, while not the source of racism, had led to higher levels being expressed, and that social media was “normalising hate and increasing division.” [2] According to another report, the aftermath of Brexit saw British Muslims suffer an “explosion” in faith-based hatred, with many women afraid to go on about their daily lives. The report found that while far-right activists are often involved in online incidents, many of their attacks happen in the real world. Such reports continued to demonstrate that anti-Muslim hatred and Islamophobia is still a significant social and political issue in the UK. [3]

The racism or xenophobia that animated some people in the 2016 referendum remains an indisputable fact of national life in the UK. However, racism did not begin—nor will it end—with Brexit. Racism goes deeper than that, just as racism in the US has always run deeper than the electoral cycle or Trump’s divisive presidential campaign. It has its moorings not only in the aching loss of the British Empire, but also the structural decline that Britain has undergone since the late 1970s and the onset of neoliberalism. The politics of Englishness today asserts itself against a backdrop of Britain’s comparatively marginal position in the world economy. Alongside this were the defeats endured by the social movements of the 1980s and the accompanying delegitimisation of socialist politics, which has left a working class profoundly disaggregated by region, nation, and ethnicity. In this sense, it is the transformations of the 1980s, rather than the austerity programmes since 2008, that bear heaviest on our present moment. [4] It is a dichotomy that racism appears to be so deeply embedded in Western thinking, when modern liberal-democratic philosophy is supposed to be based on the Kantian idea of equal moral worth. Racism is therefore a denial of that worth to people of non-white ‘races’ or, in the words of Kant, being treated ‘merely as a means’.

The reality is that the long and brutal history of British colonialism and empire lies at the heart of much of British insularity and racism. The deep roots of this racism will likely influence the politics of tomorrow, as it has already done that of yesterday and today. In the contemporary context, Goldberg (2008) suggests:

“Traditional racism has not disappeared but rather racisms have proliferated, in kind and quantity. New racisms refer to emergent forms of discrimination that have replaced older, biologically-based racism. Contemporary examples of such new racisms include Islamophobia and anti-‘migrant’ hostility, which draw upon older anxieties about identity, ‘race’, place and citizenship … In the context of ‘Brexit’, we must recognise that concerns around identity, place and citizenship are highly-racialised, through structures that enable white normativity to go unchallenged and which obfuscate the centrality of racism in contemporary Britain. [5]

Thus, the racist populist movement we are currently experiencing in Britain is not a temporary aberration. Another concern has been that the increase in racism on social media raises concerns about whether online channels are normalising hate and increasing division.

In an interview with the Financial Times in July 2019, Tendayi Achiume, the UN’s special rapporteur for racial equality, said that the UK Government’s ‘hostile environment’ policy, designed to tackle undocumented immigration, had encouraged racism. Achiume added that Brexit had amplified racial disparities and xenophobia. Achiume also criticised Prevent, concluding that race and ethnicity shape outcomes in every area of life in the UK. Achiume described the “structural socio-economic exclusion” of ethnic minorities as “striking” and largely owing to government policy. [6]

It often seems as though racism and populism has been defining our current political age. The growth of right-wing, nationalist, anti-immigration, anti-asylum seeker, anti-Muslim politics is not confined to the UK or Europe; it has gone global. Despite international conventions and declarations, racism has been dehumanising individuals and communities not only by denying their inherent equality and dignity, but by doing so on the basis of a constructed category of race designed for the very purpose of separating humans into a hierarchy meant to elevate some and suppress many. Yet the international legal community’s response to racism has been inadequate, at best. Even when nations agree to play a part in dismantling racism, many simply point the finger elsewhere rather than at themselves.

Martin Luther King Jr. once said: “It may be true that morality cannot be legislated, but behaviour can be regulated. The law may not change the heart, but it can restrain the heartless.” This is an apt reminder of the challenges faced by societies in combating the scourges of racism and racial discrimination. To counter such a bleak future, mass mobilisation is necessary. Any form of progressive mass mobilisation has to recognise that class politics are always articulated through a politics of race. Reckoning with Britain’s racism and xenophobia across time, place, parties, and social classes is the necessary first step in such a mobilisation.[7] It is also necessary to consider that not only do anti-racists need to oppose a political climate that feeds racism and xenophobia, they also need to get to grips with how populism has shaped the terms of anti-racist struggle. It behoves public activists to force the hands of Britain’s leaders to ensure that ethnic minorities feel safe and secure. Otherwise, populist politics based on nationalism and linked to racist and anti-immigrant sentiment will continue to challenge the concept of a multi-cultural, post-Brexit Britain.

Register by midnight on 26 November to vote in the General Election on 12 December.

Click here to view the candidates competing to be your MP

Previous: Pakistan protests: Calls for PM Imran Khan to resign
Next: Grenfell was no accident