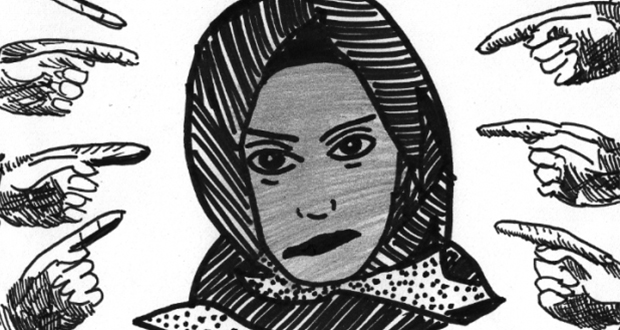 We are a popular bunch, aren’t we?  Every so often a “documentary”, poll, media debate or op-ed crops up which thrusts some 5% of Britain’s population back in the scrutinising docks where everything, from our revelatory texts and views, to the place where we live and even our emotions are callously treated, tightly monitored and, if possible, controlled through psychological bullying. It is routine.

Last week saw the hype-train once again as the BBC chose to air a “satirical” clip.  The clip – called “Real Housewives of ISIS” – according to its scriptwriters,[1] went “after ISIS”. Whilst the programme was drenched in the usual problems associated with Muslims and the media, it also provided an opportunity to uncover contradictions of the “counter-extremists” – which is always fun to highlight.  A look down the line of the usual suspect “counter-extremists” revealed typical support, with people from the Islamophobic organisations spreading proclamations of fellow “counter-extremists” regarding how female supporters of ISIS should be mocked.[2] Ironically, last year they bemoaned on Twitter about how “reform Muslims”, which they call a “minority within a minority”, are being condescended and mocked as being “betrayed by all sides”.[3]  What of the female section of the Muslim minority?

As is expected from self-styled feminists who use women as weapons against “extremist” behaviour,[4] and self-styled human rights activists who believe human rights are means of defending against extremism – whilst advocating and defending the anti-human-rights Prevent Duty,[5] the incoherence remains stubbornly present. Such “counter-extremists” believe that women who join ISIS are victims of a “poisonous narrative”. In early 2015, one even wrote an open letter to Muslim girls refuting this “poisonous narrative” and imploring the girls to not “destroy your life”.[6]  Moreover, she believes that these girls who are “preyed” on are “vulnerable”. Exploring this, she wrote:

“Preventing extremism is about safeguarding; it is a safety net and that safety net is stronger if we all play our part. Schools engaging with young people would not hesitate to share a concern if they felt there was the potential risk of a child being sexually exploited, groomed online, bullied, at risk of FGM or was at risk of falling into gun or knife crime.”[7]

Through incredible linguistic skirting, the vulnerable individual no longer remains so, exposing hypocrisy in the abovementioned words. She neatly sidesteps this inconvenient contradiction, by arguing that the mockery is targeting women who “willingly chose to join the group”.[8]  The question is, however, do the radicalisation theories underpinning Prevent no longer apply to this group of women because they chose to join ISIS of their own volition and therefore were not “vulnerable”? The argument, as purported by this “counter-extremist”, is volition magically precludes vulnerability. This argument ironically undermines PREVENT itself, for the study which underpins it is based on those convicted of terrorist offences.[9] By her argument, these individuals were not “vulnerable” to terrorism at some point because they “willingly” chose to commit a terrorist offence.  Perhaps she could write another letter to Muslim girls explaining how there is a fine print, an exemption clause if you will, when it comes to Muslim girls who do choose to join ISIS.

Please, destroy your lives and, for good measure, we’ll mock you too. And I’ll also write a disjointed piece to explain why.

Utilising some empathy, the consternation for many Muslims around the show is not difficult to understand. The paramount concern is conflation between the ostensible target, ISIS, and hijab/jilbab-wearing, law-abiding Muslim woman on the street.  On the 17th of October 2015, a 36-year-old woman traveling on a bus in Kilburn subjected two Middle East women to prolonged racial abuse and threats of violence.[10] They were referred to as “ISIS bitches”. Last month, it was reported in the New York Post that a 36-year-old Brooklyn man told an off-duty Muslim female police officer that he would slit her throat, before also proceeding to call her an “ISIS bitch”.[11] The particularly gallant man also intimidated her with his pit bull. The fact remains that sections of the public will see little difference between those mocked in a cheap BBC satire and Muslim women traditionally dressed on the streets of Britain, especially as clothing specific to Muslims has become racialised. This conflation is further aggravated by the fact that the authors of the satire themselves interchange ISIS with what they call “Islamic fundamentalism” – a vague term which has the potential of encompassing those Muslim who adhere to orthodox Islām. In the interview with iNews, the target is highlighted to be fundamentalist Islām’s “repressive attitude towards women” represented through the satire’s reference to “domestic servitude”.[12] It is not exactly difficult to discern the underlying attack on Islām’s preference for the role of men and women. This is exasperated further against the backdrop of the Casey Review on integration, which paints Muslim women not working as problematic and in need of emancipation, as if prioritising and caring for the family is somehow less in value. This “mockery” accentuates the conflation of a culture that is not specific to ISIS. It is a broader attack on aspects of Muslim practices.

Conflation and racialisation is a genuine problem. Ask the Sikhs. Louise Casey, for instance, in her BBC puff reel for her review talked about Muslim separation whilst showing a Sikh symbol.[13] The poor souls are still getting attacked by white folk empowered by politicians peddling dog-whistling politics which target Muslims.[14]

When this conflation is coupled with the fact that Muslim women are prime targets of violent anti-Muslim attacks,[15] not only in the streets but also through political proclamations,[16] the content of the satire contributes negatively to a demonising atmosphere through stigmatisation of Muslim women. Imagery rendered into stereotypes emphasised through satire is an effective way of fostering this demonisation. As Professor Raymond Taras explains, among the well-known examples of demonisation are the allegations of blood libel against Jews and the ridiculing of Muslim martyrs for their belief of “seventy-two virgins in the afterlife” (Raymond Taras, Xenophobia and Islamophobia in Europe, 2012, 10). In the present context, the satire makes a particular point about suicide vests and Muslim women as if it is specific to the cultural domain of “jihadi brides”. Will there be another satire focussing on Kurdish female suicide bombers including little girls?[17][18]

The concerns and the possible resultant offence to the satire is not exactly unreasonable. However, once being subjected to an eye-sore, Muslims must also behave “normally” by not getting offended. This was wonderfully demonstrated by an awkward article in the Guardian which had interviewed a few Muslims who stated that, in essence, they did not see a problem with it.[19] Whilst that may be the case, it is difficult to envisage genuine expression in an anti-Muslim clime. Placing aside the abovementioned anti-Muslim atmosphere, engagement is to be lauded. However, whether offended or not, there is a subtext in the imposed Muslim discourse which controls the collective Muslim conscious. Whether it is Muslim’s views on ISIS, familial ideals, or the notion of offence.

Does offence mean Muslims are abnormal? And do non-Muslim not get offended?

Au contraire, this is unobservable in the context of other communities. The pro-Israel lobby has been able to push through a definition of anti-Semitism which, if applied in the Muslim context, would have sent the usual coterie of anti-Muslim authors and neo-colonialist commentariat into a mass convulsion.[20] We would have heard epic cries of a clash of civilisations as the Western values of “freedom of speech” were being consigned to the constitutional dustbin. The whole country has been roped into the Prevent strategy which is effectively based on views that are acceptable (British values like “mutual respect”) and those which are not (extremists – including those who do not accord to “mutual respect” and are therefore offensive).  Ridiculously, the Casey Review on integration called for respect for the “monarchy and the BBC”.[21] This is something which has become increasingly difficult over the years in the context of the BBC and perhaps untenable with the reckless decision to air the programme. The government can, in other words, impose respect (mainly on Muslim) whilst Muslims must simply put up and shut up if offensive material is hurled their way.

Despite the abrasive engagement with the broader Muslim community, Muslims must continue to imbibe the teachings of Islām through their actions and responses to such “civilised” stoking.

“You will surely be tested in your possessions and in yourselves. And you will surely hear from those who were given the Scripture before you and from those who associate others with Allāh much abuse. But if you are patient and fear Allāh – indeed, that is of the matters [worthy] of determination.”[22]

“The Prophet (sall Allāhu ʿalayhi wa sallam) would never speak excessively, nor would he ever resort to indecent speech to amuse others. He would say: ‘Verily the most beloved of you to me is he who is the finest in manners.’”[23]