Are you ready for our first ever NATIONAL CAMPAIGN?
Home / Current Affairs / Refugee Crisis: Has Europe set an example for Muslim nations? 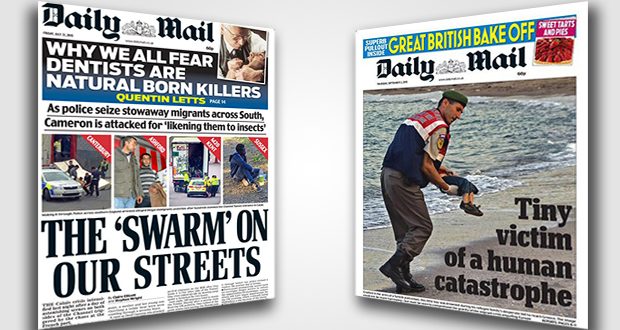 Refugee Crisis: Has Europe set an example for Muslim nations?

Refugee Crisis: Has Europe set an example for Muslim nations?

All of a sudden every media outlet is cross-posting the picture of the young child who drowned in the sea. All of a sudden the entire world is talking about Syrian refugees with many European countries posing as the world’s supreme ethical heroes, humanely conscious without bounds and sympathetic to desperate refugees from the very beginning, opening their borders for them, once and for all. All of a sudden the entire world is singing the praises of this ‘benevolence’, and ‘morality’, this rather “extra ordinary compassion”[1] displayed by Europe and Europeans in general, all the while lambasting the ‘rich Muslim countries’ that have failed to take on any refugees,[2] in a feeble attempt by some at linking this to Islām.

Sadly, no one is asking themselves: why the sudden explosion of sentiment? Is all of this just a coincidence? Let us start by adopting a memory longer than at least the past few weekends. Rewinding to just over a year after the March 2011 revolution erupted, hundreds of thousands of refugees had already fled to neighbouring Muslim Jordan, Lebanon and Turkey,[3] years before the world knew of anything called ‘ISIS’. Back then, western governments were struggling to respond to the Syrian regime’s use of nerve gas and the 20,000 civilians mercilessly killed by the brutal regime,[4] in fact, ‘moral’ European governments went just about as far as condemning the Assad regime at the UN General Assembly![5] As the revolution intensified, around 2,000 Syrians were fleeing their homes, and up to 300 were being killed every day,[6] whilst Europe failed to even move a finger. Systematic ethnic cleansing has since attempted to change the demographic setup of Sunni cities in Syria with hundreds of thousands displaced from their home towns. Many wonder if in fact this on-going tectonic shift of religious demographics is more than just an unintended consequence of policy decisions made by western powers, whose interests are incidentally threatened by burgeoning calls for self determination.

More astonishing is how the media has managed to knead the play-dough in our heads such that to believe that ‘ISIS’, who only gained momentum in 2014,[7] is the primary cause of this mass exodus; and the number of people ready to buy into this laughable narrative is a shame to our intelligence.[8] On the contrary, many of these ‘humane’ nations helped the Syrian regime quell the moderate opposition, carrying out airstrikes on anti-ISIS and anti-regime groups, including Syrian civilians.[9] Since then, compassionate Britain has bombed Syria, carrying out summary executions of its own civilians on the baseless justification of them threatening the UK.[10]

With now almost a quarter of a million killed,[11] Europe continues to turn a blind eye to Assad’s slaughtering of Syrians and the real reason for people’s exodus to Europe, refusing hands down to arm the people’s opposition or even impose a no-fly zone over civilian areas to shelter those very refugees.[12] This impulsive outburst of emotions, apart from seeming very synthetic and hardly effective, is stained with ulterior motives; the least of which is to justify that the UK continues in its bombing campaign to bring an end to some progression in Syria against Bashar, who lately publicly admit defeat,[13] but to end progression definitely not led by ISIS.

With all of this focus on the humane European nations, there is as one would expect little or no mention of the humane Muslims who received droves of poor Syrian refugees, without expecting them in return to “plunge the ‘grey gap’ in its aging workforce.”[14] In fact, with a GDP of less than 1% that of Germany,[15] Muslim and Arab Jordan has accommodated well over 600,000 refugees,[16] many supported and maintained by the already impoverished Jordanian civilians whilst Muslim Turkey hosts almost two million refugees,[17] despite no international laws stipulating that it does so,[18] but out of the religious drive of its government and people.[19] In fact:

95% of all Syrian refugees are spread between Muslim Turkey, Lebanon, Jordan, Iraq and Egypt.18

No doubt a call for us to educate ourselves before happily being lectured by boastful morality. Not least some of the same neo-con mouthpieces that hail editors who just recently referred to drowned migrants as cockroaches, suggesting that the best solution is to burn all of their boats in North Africa.[20] Now that the UK government has finally snapped to reality, coming to terms with its “moral responsibility”, touchingly prioritising “vulnerable children and orphans”, it will accept 20,000 refugees over the next five years;[21] or, a Ford Fiesta full a day. The same number crosses into Turkey each weekend. In a passing note, this is despite Article 14 of the UN Declaration of Human Rights which states that “everyone has the right to seek and to enjoy in other countries asylum from persecution”, whilst the aforementioned Muslim countries are not signatories, apart from Turkey that is absolved from hosting other than European Union refugees.

So if nothing else, then this is a call for the Muslims not to fall for this drivel, or to reciprocate the Muslim-bashing adopted by neo-cons and Euro-supremacists alike. Let alone the nonsense of Syrians wanting to convert to Christianity for the lure of a £36 a week in benefits. Yes, there are severe shortcomings from everyone involved in fulfilling their duty towards our Syrian brothers and sisters, not excluding rich totalitarian regimes of the Gulf (Bahrain, Kuwait, Oman, Qatar, Saudi Arabia, and the United Arab Emirates) whose response has been particularly abysmal. We are by no means defending the regimes that work more for foreign interests instead of representing the will of their peoples. But no one has or will ever be more at the forefront than the Muslim community of the world, who are in most places economically poorer but, in the UK alone, three times as charitable as people of other faiths and atheists.[22]

Even if our Ummah experiences times of weakness or disunity, it remains that no mutual mercy, no better values or humanity, no better principles or ideals will ever surpass those enticed by Islām and knitted into the fabric our Ummah, definitely always present and perpetually being acted upon even if the mass-media tries to overshadow this. Who else openly and privately sees the bond of faith closer than those of blood than the Muslims? Allāh says:

“And hold fast by the covenant of Allāh all together and be not disunited, and remember the favour of Allāh on you when you were enemies, then He united your hearts so by His favour you became brethren.”[23]

The Muslim community will be at the forefront, as it has always been when providing the maximum support to our brothers and sisters as Allāh commanded us to do, and on a societal level, no one else has come close. No one is more selfless, ready to sacrifice personal comfort, compassionate and impartial than a Muslim who lives for the pleasure of Allāh. It never needed young Aylan Kurdi be swept onto his face for the innumerable individuals and NGOs to race to aid the Syrians. This is because a Muslim does not give “to show [off to] the world”21 after international pressure becomes unbearable, or for religious missionary endeavours, but rather:

“And they give food, in spite of their love for it (or for the love of Him), to the poor, the orphan, and the captive, [saying] ‘We feed you seeking Allāh’s Countenance only. We wish from you no reward, nor thanks’.”[24]

They are just as humane in the presence of others as they are in their absence, all the same, as they were at the beginning of the revolution and as they are now. This sincerity is something that characterises a sincere Muslim and none other. And because the Prophet (sall Allāhu ʿalayhi wa sallam) says:

This by no estimation means that anyone who has been given the gift of Islām will follow its guidance, nor does it mean that those who have yet to find the light of Islām will not be generous, as we have seen in the way many individual European communities have responded. As for European governments, however, then I cannot help but recall a message from a well-known Syrian academic and activist recently:

“To those western governments who have accepted millions of refugees from Syria, I have a suggestion. Let the millions return to their home and in their place just take one from Syria—Bashar al-Assad.”