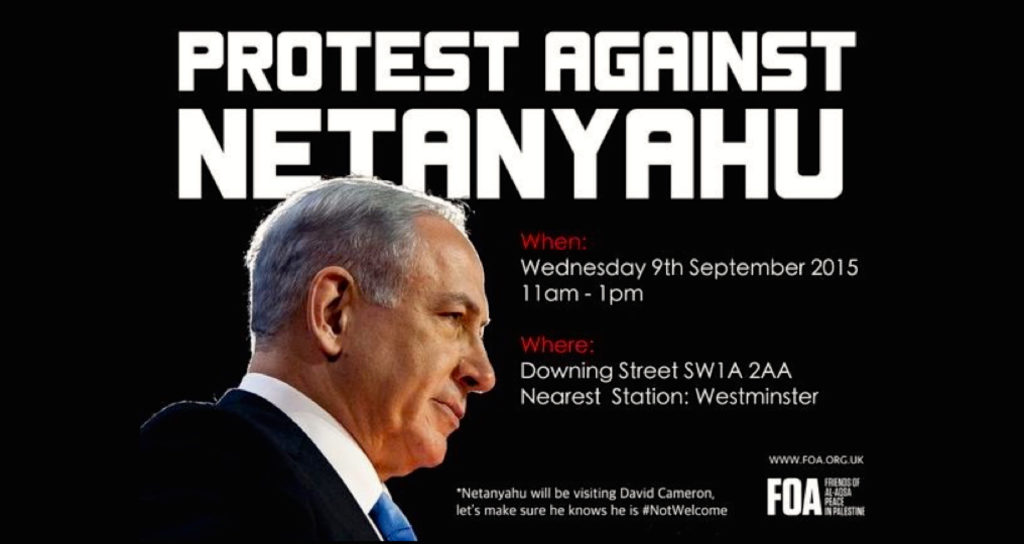 There has been a lot of rhetoric around the refugees fleeing into Europe recently, with the iconic picture of the drowned Syrian baby[1] prompting even the most hard-hearted politicians and media outlets to water down their anti-“migrant” (read: refugee) rhetoric.[2] Almost everyone knows of this poor child’s preventable death, but how many know about Ali Saad, the 18-month old toddler who was burnt to death—along with his parents, rahimahumullāh—by Israeli settlers only weeks ago?[3]

They were just one of swathes of Palestinian families routinely terrorised by illegal settlers in territory illegally and viciously occupied by the most brutal and lawless, racist Zionists that Israel has to offer. Hours after this routine incident of violence against a subjugated minority in their own land, Benjamin Netanyahu’s government sent a message and approved the building of 300 more settlement units right next door, in Beit El,[4] flouting the 1949 Geneva Convention which does not apply to him.

Days after Britain has been awakened to some of the realities of refugees fleeing to Europe, it will be welcoming a man whose state and non-state forces have been contributing significantly to the mass fleeing and drowning.[5] This man is now to be given royal treatment funded by the UK taxpayer, but growing numbers of conscious citizens have been sending a message that he is not welcome,[6] culminating in a demonstration today, Wednesday 9th September 2015.[7] This comes after more than 100,000 citizens signed a petition that he be arrested for war crimes when he attends,[8] the response to which shows Cameron’s government is clearly on the back-foot.[9]

These are just the tip of the iceberg when it comes to this man’s litany of alleged war crimes, and like the proverbial iceberg, what lurks below the surface is even more dangerous. This is the fourth term he is serving as Israeli Prime Minister, in what has now been deemed “the most extreme right-wing government” in Israel’s history,[10] not to mention one of the smallest and most inexperienced cabinets.[11] Not only has this perfect storm continued to silently encourage extremist attacks on Palestinians, but turned up the volume in the dehumanisation efforts.

Coalition partner and minister of education Naftali Bennett, leader of the ultra-racist “Jewish Home” party is quoted: “I’ve killed many Palestinians in my life, there’s no problem with that.”[12] Defence minister Moshe Yaalon, who himself has evaded arrests for war crimes, likens Palestinians to cancer.[13] His deputy defence minister, Eli Ben Dahan is likewise open about his racism, “To me, they are like animals, they aren’t human.”[14]

No call for genocide would be complete without the call for violence against women too. Justice minister Ayelet Shaked advocated that Palestinian mothers be killed because they “give birth to little snakes,”[15] famously a day after which Palestinian teenager Muhammad Abu Khudair (rahimahullāh) was kidnapped and burnt alive.[16]

This is the extremist Zionist alliance that Netanyahu is in charge of in his crusade to cleanse “Israel” of Palestinians for his apocalyptic worldview. It was put together months after perhaps the highlight of bloodshed and carnage of his career: 2014’s Operation Protective Edge. As the Prime Minister during this vicious assault that turned the largest concentration camp in the world into the largest graveyard,[17] he bears direct responsibility for the war crimes identified recently by the UN Human Rights Council.[18]

His hands are bloodied with the more than 2,000 men, women and children in the space of seven weeks—human beings that were slaughtered like “animals” indiscriminately and knowingly. Indeed just days ago a hard-hitting UN report exposed the “de-development” of the blockaded Gaza strip,[19] a process designed not only to hinder development but actually reverse it, predicting it to be rendered uninhabitable in just 5 years.[20]

The list of breaches of international law Netanyahu has to answer for goes on and on. Whether it is his on-going illegal acquisition of Palestinian territory, the military occupation, ethnic cleansing and de-developement of East Jerusalem, Gaza and the West Bank; whether it is the denial of Palestinians’ right to live and determine their own affairs, who suffer the apartheid policies in constant fear of Israeli attack; he must be held responsible. Silence or neutrality in such a situation is taking the side of the aggressor.

We are not naïve, we do not think that Netanyahu will be brought to account immediately—it is a long process. However, we have to push for it. Last year 150,000 marched the streets of London protesting the genocidal assault on Gaza, sending a powerful message all over the world,[21] boosting the morale of the oppressed.[22]

We must send a message that counters that which the world often sees of Britain; a message that those who brag and rejoice over the extra-judicial assassinations of their citizens[23] are outnumbered by those who call for a due process and a rule of law even for criminals who have power. Apartheid leaders in the past eventually fell when it became too costly for the power structures to keep them.

Whether it be attending a demonstration, participating in the boycott, divestment and sanctions (BDS) movement—which is causing serious damage to apartheid economics[24]—or raising awareness however we can, we have a duty as Muslims to do something. There is no excuse for a Muslim to be apathetic, as we have covered in more detail in this article.[25] The Prophet (sallAllāhu ‘alayhi wasallam) said,

Many people may have a defeatist, pessimistic mind-set, causing them to complain that they cannot change something. “What can I do? I’m just one person.” There are at least two dangerous mistakes in this complaint.

Firstly, it is known as the Perfectionist’s Fallacy to abandon something just because you cannot fully perfect it. This is similar to the ancient maxim of the scholars of usūl: ‘That which cannot be attained completely must not be left completely.’ Secondly, and more importantly, this complaint ignores the primary reason for changing an evil in the first place, instead focusing on worldly consequences and output. The reason why a believer should strive to change an evil is not merely to seek the change, but the striving itself. This is what Allāh wishes to see in His slaves – since He is able to carry out any change that He pleases, often through a completely unexpected agent.

What this ḥadīth highlights is a fundamental principle in Islām: Allāh does not judge us based on material effects and absolute quantitative output. Allāh (subḥānahu wa taʿālā) judges us according to what He has given us; according to our potential. Therefore we should never belittle anything. As the Prophet (sall Allāhu ʿalayhi wa sallam) said, “Fear [or protect yourselves from] the fire! Even if with half a date!”[28]

It could be that the only action in one’s capability is, for example, to sign a petition, or attend a demonstration, or even pass on an encouragement to do so. Allāh will not ask that person why he did not free Palestine nor will He (subḥānahu wa taʿālā) judge that person unfairly; rather Allāh will ask and judge him according to what actions were within his means and capabilities.

We all criticise prime ministers and kings for not doing what is in their capacity—liberating Palestine, unifying the Muslims, protecting the weak of the umma. If, however, we fail to do those ‘minor’ things that are within our grasp—attend demonstrations, write letters, unify our local communities, help the weak around us—we could be just as bad or worse than them in the Sight of Allāh.