Rohingya – what does it mean to be stateless? 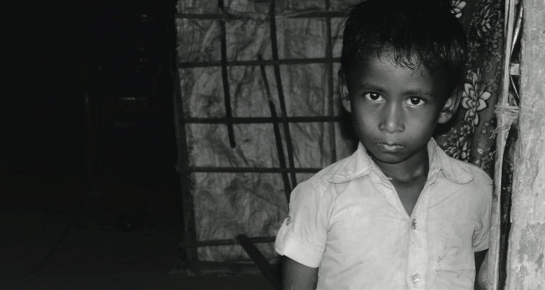 Our delegation to Bangladesh set off on the 13th April 2015 –5 days of travelling across several districts of Bangladesh visiting and supporting the poor people of Bangladesh and Burma. The following details our experiences in Cox’s Bazar – a beautiful place that radiates a dawn heat that makes you feel alive, as you breathe in deeply the pure morning air.

Our day started early, driving along a scenic route affectionately named by the locals as the marine drive; a road that snakes alongside the longest unbroken natural beach in the world, all 78 miles of it. However, the picturesque scenery can mislead. The road is narrow – a chaotic crisscross of cars, rickshaws, cows and monstrous trucks all vying for space in the dangerously tight shoestring width of road. We journeyed along this pothole-ridden road for several hours. The southeastern district of Cox’s Bazar holds a unique distinction for Bangladesh: it carries the nation’s hopes of kick starting a tourist destination as the only ‘beach resort’ in Bangladesh.

The Rohingyan refugee camps in the Cox’s Bazar district is an inconvenient truth that Bangladesh does not want to identify with – a whole community of people who have been displaced and made refugees in the very lands that gave birth to their ancestors, themselves and their children.

Historically their lands were known as Arakan, a boiling point of tension, crudely torn apart by a military dictatorship that turned an indigenous Muslim minority upside down, abandoning them into a stateless limbo. What does it mean to be stateless? Imagine not being worth even counted amongst Bangladesh’s circa 130 ethnic groups; imagine being treated like an illegal immigrant, requiring permits for travel or even marriage! Imagine being barred from further education. If you can imagine all of this, then you know how it feels like to be stateless.

“torn apart by a military dictatorship that turned an indigenous Muslim minority upside down, abandoning them in a stateless limbo. “

The Rohingyan refugee camps in Cox’s Bazar are strangely unique places. To the ill-informed, cosmetically the sites of the refugee camps seems just like any other disadvantaged poor village characteristic of Bangladesh. But for those who dig a little deeper, the rudimentary bamboo and plastic membrane covered structures, that these unfortunate people call their home, hides the struggle of a people whose homes are as fragile as the sandbanks used to protect the beaches from the strong tides powering through from the Bay of Bengal.

It is believed that 300,000 Rohingya now live in Bangladesh. There are two official UN-recognised refugee camps in Cox’s Bazar; however, the vast majority is not recognised by Bangladesh. A graphic illustration of this Government disregard was evident in 2012, when Bangladesh turned away thousands of Rohingya fleeing sectarian violence in Rakhine State, Myanmar. Worldwide International criticism drew attention to the fact that three international aid agencies were banned from operating among these unregistered camps in Cox’s Bazar. This is in addition to the recent news of countless Rohingyan families stranded at sea.

We paid a visit to the unregistered refugee camps in Mohesh Khali, with a renewed intention to bring these people’s story to the world, an issue that has been ignored for years – oppression that has been so consistent that mistreatment and persistent disregard of these refugees has become institutionalised. It became apparent that our visit did not go unnoticed by the local authorities, who persisted in following our every move during our time in Cox’s Bazar.

It was an unnerving experience being followed by an unmarked vehicle with no number plate, making it clear we were being watched and chillingly followed. This type of intimidation further reinforced the fact that local authorities do not support the vital aid work that the Rohingyan refugees so desperately need.

As we were being followed, we decided that it would be best if the group split to visit our various projects across Cox’s Bazar. This was achieved by separating from the main vehicle, which continued its drive, visiting some of the tourist attractions that Cox’s Bazar is famous for, to keep our unwanted tail on a cold trail!

A pop up medical clinic has served as a vital service providing basic medical care, which otherwise is not available. Dr Mohammad, one of three doctors, told us that due to their stateless existence, the Rohingya have no hope of regular check-ups. This simplistic medical setup is a lifeline for these Rohingyan families; many have been diagnosed with illnesses that can be cured with treatment we take for granted in the UK. Dr Mohammad also said that frequently his patients are afraid of identifying themselves as Rohingyan.

Please continue supporting the Rohingyan cause to help alleviate their suffering and their struggle for survival.

Mohbub is a Legal Risk Analyst and a volunteer relief worker for Human Aid UK.