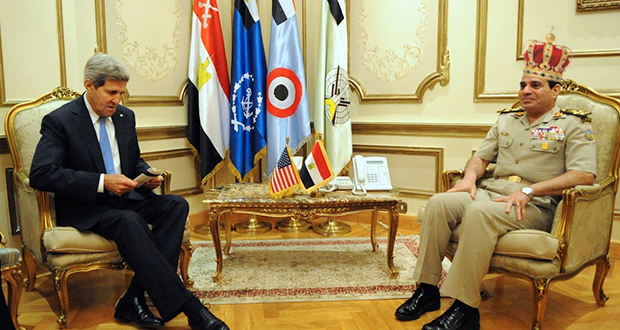 AbdulFattah al sisi, we salute you. We all rise to congratulate and honour the magnificent man who has managed to maintain a moral code so profoundly. The moral code of Fir’awn (I mean) has been a long-standing tradition maintained and cultivated over the centuries to suit the needs of the wealthy and the advantaged alike. Sisi is the greatest ambassador of this tremendous art in our time.

Critics of Mubarak had long since acknowledged that he lacked the destructive, murderous nature of a true leader. Mubarak tried his best, but he just lacked a deep insight into the effective use of overwhelming force, violence and terror required when propagating a tyrannical, military dictatorship. The man killed too sparingly and subtly, like his heart wasn’t really into it and he was never quite able to join the murderers’ halls of fame. After 40 years of half-hearted oppression, Egypt needed a change.

It didn’t take long for Morsi to make it clear that he had no intention of stealing from the poor and giving to the rich,[1] so obviously he was thrown out. Sisi on the other hand never had this problem, and unlike Mubarak he knew how to oppress like the best of them. In the space of just one year Sisi managed to give the Assad killing machine a run for its money, killing over a whopping three-thousand in less than four hours and throwing many more in jails.[2] As a true student of Fir’awn, he has managed to emulate his Sunnah of tyranny with flawless devotion.

Popular support, the likes of which Obama and Cameron can only dream of, is no sweat for the soon-to-be-crowned grand dictator of Egypt.[3] An overwhelming percentage of true Egyptians pledge their allegiance to the coup. Informative government polls tell us that an staggering 88 to 98% of true Egyptians pledge their unwavering support for Sisi, in fact only 1.9% oppose him.[4] But don’t worry, the military assures us that these polls are accurate to a fraction of a percent. And I believe them, these are, after all, the scholars who cured AIDS[5] with an ingenious contraption that cures the disease through the consumption of miraculous Kofte Kebabs.[6]

So it’s true that the election results were yet to be published at the time of writing this article, but Sisi has left no doubt that he will eventually emerge victoriously as the president of Egypt. How can anyone dispute Sisi’s right to rule when Anwar Sadat himself came to Sisi in a dream and told him he would be President,[7] and when Husni Mubarak called him ‘Egypt’s hope’?[8] Allāhu Akbar! Since when were silly little things like elections or ‘democracy’ an issue? Most feeble leaders may indeed be confined by such things, but not Sisi. People have been voting since the January 2011 revolution but that didn’t make any difference, so why should the latest elections matter? If poor, foolish people in Egypt accidentally vote for someone else, Sisi will just have that person in the jail cell next to Morsi, and on death row in a jiffy. Elections in Egypt are really considered to be more of a ‘light suggestion’ as to who should be in power rather than a mandate. I don’t know why they even bothered appointing an ‘Interim President’ – what was his name again? From the first moment Sisi emerged in those cool sunglasses, I knew what was missing was a crown on his head.

I mean, imagine if the people were allowed to choose their own president! People are like children, they don’t know what’s good for them, and just like children, even if they didn’t like their veggies, they should be rammed down their throats all the same. The vegetable in this case is the Field-Martial, Minister-of-Defence, Chairman-of-the-Military-Council, Deputy-Prime-Minister and soon-to-be-President of Egypt: Abdulfatah Al Sisi. Gosh, look at all those titles! Māshā’Allāh tabārak Allāh. However to be fair this whole vegetable comparison does seem like a disservice to Sisi, as vegetables are no way near as impressive at murdering their opposition or imprisoning people with ‘silly opinions’.

Sisi has learned well from the right-wing in the West. The right-wing recognised that the best way to support an expensive military campaign would be to tell everyone that the “terrorists” would be attacking us whilst stealing our jobs and abusing the NHS. This is from the inside of course, hospitals are nothing but terrorist training camps, some reports even claim the terrorists might be doctors, nurses or even hospital directors[9]but don’t listen to them. Terrorists! It was a tactic that Sisi employed effectively when he decided that the best way to show everyone who the terrorists were was to butcher a bunch of annoying ‘pro-democracy’ protesters who inconsiderately caused ‘traffic congestion.’[10] Luckily they were unarmed peaceful protesters so it was like shooting fish in a barrel.

Sisi truly is an inspiring leader with his priories sorted. For example just take a look at the genius of the Sisi political campaign. Western politicians tend to go around kissing babies, cracking jokes, hosting question and answer sessions, trying to understand the needs of their constituents and generally wasting time and effort—not Sisi! Instead, Sisi just funded a military campaign, allowed the economy to fall apart[11] and starved his electorate, telling them to deal with it. Think of how much money time and effort he saved!

Sisi is about to cross the finish line and cement his power once and for all over all of Egypt. I am pretty confident that nothing can stand in his way… well so long as the rabble of ‘pro-democracy’ Islamists don’t continue to stand together; don’t remain steadfast in their opposition of injustice; and carry on pontificating over whether or not Sisi is a ‘Hākim’ instead of actually doing anything. Sisi will reign unchallenged and will probably prop up a couple of his own pyramids in no time.

I recommend that all students of Tyranny pay close attention to the new Pharaoh of Egypt and his new groove; it promises to be more brutal, fascist and oppressive than ever before. Silly Mubarak, this is how you run a dictatorship.

[9] http://tahrirnews.com/ title: ‘the arrest of a Hospital Director for being a member of a terrorist organisation’