#STAND4UYGHURS
Home / Analysis / No, Blair. You are a liar. 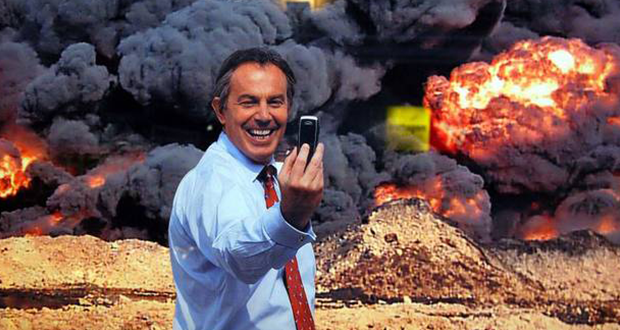 And never think that Allah is unaware of what the wrongdoers do. He only delays them for a Day when eyes will stare [in horror]. Racing ahead, their heads raised up, their glance does not come back to them, and their hearts are empty.[1]

The great British Butcher Blair is at it again, warning the West about “Islamic extremism”. Instead of paying for his war crimes, this mass murderer is allowed to masquerade as a peace envoy, earning millions from the blood of those slaughtered by his illegal wars.

How Blair was chosen as a peace envoy to the Middle East is beyond comprehension. As one of the instigators of the Iraq war which set the region in flames with sectarianism he is now the Middle East envoy for the quartet of the UN, EU, US and Russia. If anything, it shows the contempt the quartet have for the region and its people. How a bloodthirsty warmonger can bring peace for the Palestinians is hard to fathom.

Not unlike other deranged mass murderers, Blair seeks to frame others for the carnage that he has created. His latest attempt to make money from blood is to warn the West against “Islamic extremism”. In doing so, he says “they must co-operate with other countries—in particular, Russia and China—regardless of other differences.”[2]

It does not matter whether the Russians and the Chinese are violating human rights or repressing innocent civilians. But as long as they fight ‘Islamists’ then that is the side the West needs to take.[3]

What is Blair so agitated about?

Blair is only preaching what he practices. He has not made any secret of whose side he is on. You can count on him to be on the side of every murderous dictator and despot. Back in January he wrote that “extremist religion is at root of 21st century wars.”[4] Needless to say it was clear which religion he was talking about.

Then, just five days later, he gave staunch backing to Egypt’s military coup d’état following a meeting with its army leader, Abdel Fatah al-Sisi;[5] praising the despot who, after overthrowing the elected president, subsequently killed more than a thousand peaceful protestors and arrested thousands more. But for Blair this was necessary to “put the country back on the path to democracy.” By removing a democratically-elected president, of course!

For Blair, Morsi was simply too soft for his liking which is why he prefers to deal with a military dictator over an elected statesman. Democracy can be conveniently discarded when it does not deliver the desired results. Blair believes “We should engage with the new de facto power and help make the new government make the changes necessary, especially on the economy, so they can deliver for the people.”[6]

Blair is a compulsive liar responsible for the deaths of hundreds of thousands of Muslims. It is an incredible situation we find ourselves in where the perpetrator of war crimes is blaming the victims. Without his powerful friends in the media and the ruling establishment, Blair would not have a platform to disseminate his propaganda. But, even his friends know that Tony cannot be trusted as Murdoch humiliatingly discovered about his wife.[7]

People in the west should be smart enough to see beyond the scaremongering and see for themselves where the real danger lies. The greatest threat facing the West are interests of the powerful elite that uses war as a means to easy money.

While Blair barks, his masters in the US demonstrate their support for democracy by going ahead with supplying ten Apache helicopters to Egypt’s military[8], a military that was complicit in the coup as well as the repression and abuses of their people for decades, and especially as of late. Of course in deranged minds this has no connection with how those on the receiving end of the West’s benevolence might respond.

So Blair, go ahead and keep banging your war drum. For now you may escape judgment but it is for a short time. Unless you repent, you will certainly answer for your crimes in the  most supreme court of justice.

Abu Talha has been regularly involved in teaching and speaking about Islamic issues for over fifteen years.He undertook his Arabic and Islamic studies at the renowned Islamic University of Madinah where he graduated with BA (Hons) in Shariah and a Diploma in Arabic language. While in Madinah he was blessed to learn from some of the scholars in the Prophet's Masjid. Formerly, he worked as a full time Imam and Khateeb at an Islamic centre for a number of years. Along with his Islamic education, Abu Talha is a qualified and experienced language teacher and holds a Masters in Education and Applied Linguistics.​