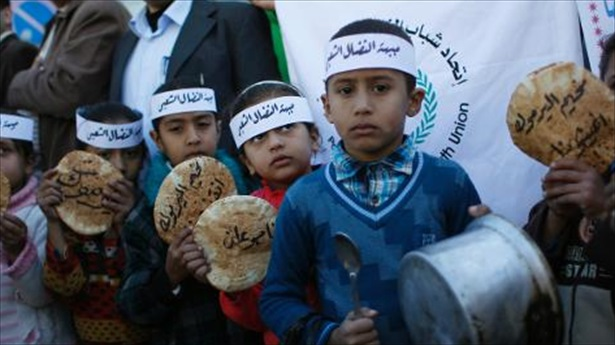 “A woman went to Hell because of a cat which she detained. She did not feed it when she detained it, and she did not let it free to eat of the vermin of the earth.”[1]

Upon one calamity mounts another for the Palestinians in Syria. By no means has that painful memory been forgotten; marching through the hills and valleys upon the curved roads of Palestine, escaping the Zionist onslaught. Like a thick white snake that stretched into an unending horizon, Palestinians parted their homes as if they had parted from their souls and indeed it felt even more difficult than that.

“Their Lord has answered them: ‘I will not allow the deeds of any one of you to be lost, whether you are male or female, each is like the other [in rewards]. I will certainly wipe out the bad deeds of those who emigrated and were driven out of their homes, who suffered harm for My cause, who fought and were killed. I will certainly admit them to Gardens graced with flowing streams, as a reward from God: the best reward is with God.”[2]

The dream of return was nurtured by concurrent promises from the regimes of brotherly nations. Sadly, the speciousness of their intentions was to render Palestinian hope futile. It was these same regimes that forged the image of these defenceless families as dependent refugees who sought to alter the demographics of their nations, usurp resource and stir-up civil discord. In the end, these families who were destitute refugees bore the brunt of massacres, mass expulsion and oppression in Lebanon, Syria and Jordan in the ‘90s, Kuwait in 1990 and Iraq in 2003. Having become the scapegoats of every evil and crime that occurs under the sun in Egypt’s Sinai desert, one wonders what else the Palestinians can pay for on behalf of the Muslim world. Now, caught between the raging battles in Syria where the greatest concentration of refugees resides, the Palestinians in the refugee camp of al-Yarmouk, south of Damascus find themselves starving to death. Al-Yarmouk was once home to half a million citizens and 250,000 Palestinian refugees.[2]

At least 1,500 have been killed by the Syrian regime[3] through its indiscriminate bombardment of the region using explosive-packed, unguided barrels. According to the United Nations Relief and Works Agency (UNRWA), more than 400,000 Palestinians in Syria that have fled their camps[4] are now in dire need of humanitarian assistance, which is three-quarters of the entire refugee population.[5] Now, the remaining 20,000 Palestinians inhabit a town that “resembles a World War Two ghetto,” lost in the war but nonetheless facing collective punishment.[6] Nothing differentiates a Palestinian suffering in the war to a Syrian, the struggle is one and the method of murder put into effect by the regime is exactly the same. But along with death, the trifles of Arab-world politics and their scheme to hold the Palestinian in the lowest of contempt must always come into effect. Jordan, while keeping its borders open for Syrian refugees, thwarts Palestinian refugees from entering because it desires no more of them on its land. Lebanon grants fleeing refugees 15-day visas that can be renewed for $30—a cost they find exorbitant to handle[7]—in order to “maintain the sensitive demographic balance” in the region.

Similar can be said about Egypt. “Instead of offering vital help and support to refugees from Syria the Egyptian authorities are arresting and deporting them, flouting human rights standards,”[8] part of a series of penal measures enforced by the despicable coupe government against them. Some are deported back to Damascus where they are tortured or killed. The same coupe regime has also hampered more than a dozen boats carrying refugees from Syria to Europe while other boats have overturned at sea, drowning hundreds on board,7 amidst reprehensible abandonment from the Muslim and Arab state. But since it has proved a bit much to invoke the neighbourliness of such a heinous regime that is waging a war in its own right against Islam and its advocates, it seems the least it can do is to allow foreign agencies such as the UNRWA to carry out this duty. Egypt, however, refuses to be recognised as a country that hosts refugees and as such it remains out of UNRWA’s area of operation. Egypt furthermore “prevents refugees from seeking protection from the Office of the UN High Commissioner for Human Rights (UNHCR), contrary to UNHCR’s mandate under the 1951 Refugee Convention.”10 This has classified the some 5,000 known Syrian-Palestinians who have reached Egypt[9] as ‘double-refugees’, denied of their most basic rights to education and shelter, coerced to depart back to Syria,10 or at the very least constantly threatened of this. Up to 1500 refugees—400 of whom Palestinian and dozens children—are caged in prison cells,[10] for trying to cross the Mediterranean and therefore “leaving the country illegally” in often awful conditions.[11] In other instances, Egyptian security forces have fired upon boats departing from its unwelcoming shore, killing and injuring a number of its desperate boarders.

Having left their possessions and livelihoods, these refugees understood that they did not sail to regimes who cared to implement the injunction of the Prophet (Ṣallāhu ‘alayhi wa salam): “…A Muslim is the brother of another Muslim, he neither oppresses him, nor disgraces him, nor lets him down, nor does he hold him in contempt.”[12] They did, however, hope that they would be left to at least “eat of the vermin of the earth,” through what remains of proximity, shared faith and heritage. Their faith or humanity did not intercede on their behalf nor were they even granted the protection that Allāh guaranteed for polytheists who seek it through his words: “And if anyone of the polytheists seeks your protection, then grant him protection…” They found nothing, and those who remain are starving to death for no conceivable reason.

The young girl in al-Yarmouk Camp, Alaa’ Al Masry is one of dozens that have been killed by starvation and bitter cold due to a strangling siege imposed by the Syrian regime that has prevented bread, water and the most basic of needs from reaching them. Children have begun gathering grass for nutrition and verdicts have permitted the consumption of cats and dogs5 while protests at the border of the camp continue to face targeted sniper fire from stationed regime militiamen.[13] Attempts to save the young girl through feeding her cooked foliage proved fruitless while her family watched her helplessly while she deteriorated day by day, before her jaw dropped and eyes stared horrified at what was happening around her.[14] Pictures arriving from the choked camp are enough to tear the heart; pale faces, thin bodies with protruding ribs and extruding stomachs from its complete emptiness. Alaa, with her departure drives international governments and onlookers into a new era of decayed morality, unmatched emotional anaesthesia and carelessness for humanity or human rights while they wrangle with one another over a ‘strategic solution’.

Muslims in the west continue to redefine themselves, motivated by the changing standards of the western system and anxious about how we will be received as a community. Some have even gone to the lengths of adapting the purity of Islam or how it is understood in a way that projects lack of confidence in noble Islamic values. But these same ‘inspirational’ systems that claim supreme humanitarian ethics and values, have allowed thousands to die of malnutrition, displacement, torture and weather in a war despite being able to influence what is happening in Syria beyond mention. The international community is at the face of this humiliating episode. It came together to unanimously agree a solution to Syria’s chemical arsenal but is insensitive to one of the worst humanitarian crises in the modern day. Never has a crisis of this size been ignored by the Security Council.[15]

The Syrian struggle has demonstrated that these value-rich systems have a vested interest that the Syrian plight continues and that the humanitarian situation worsens further. Surrounding regimes are between being despised and in the process of being removed, or very capable of assisting but uninterested in what happens beyond the palace door let alone in neighbouring lands. It is but a consequence of this abandonment that the stateless Palestinians “have no legal status, no political representation, no serious international support, no leadership truly concerned by their plight, no place to go” or to return.14 This international desertion places the burden on the people amongst whom good will always remain and at their foremost those who have been told that:

“Those who believed and emigrated, and struggled for God’s cause, and those who gave refuge and help– they are the true believers and they will have forgiveness and generous provision.” [16]

The plight in Syria should never be disconnected from our daily lives, nor should our help to them be considered as taxing. When it comes to what is happening in Syria, the aspect of charity and aid excels to a new height, becoming a pavement to redefining our international situation as Muslims collectively. It is a trade with Allāh that will never lose. When Syria prospered it produced Sheikh ul-Islām ibn Taymiyyah, who was born in the city of Harrān, near the Syrian border; Imām Ibn Kathīr, born in the city of Busrā, east of Damascus; Ibn Al Qayyim Al Jawziyyah, born near Damascus; and it produced the likes of Imam al-Nawawī born in Nawā, in the city of Horān of Syria. Now it calls back upon us in anticipation of an answer.

[12] Hadith: Muslim on the authority of Abu Hurairah