#STAND4UYGHURS
Home / Comment / Terror in the City of Peace 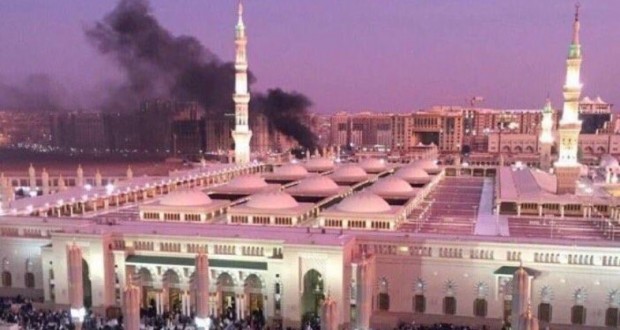 Terror in the City of Peace

Official statement from the Saudi Government’s Press Agency confirms that the blasts in Madinah al Munawwarah were unfortunately suicide bombings.

As a resident of Madinah (alhamdulillah), yesterday’s news of the explosion in the blessed city of the Madinah, close to the masjid of the final Messenger, the beloved of Allah, Muhammad (sall Allāhu ʿalayhi wa sallam) shocked me more than most. Myself and the people of Madinah could never imagine that an event like this would occur, not in this sacred city of all places. Anyone who has lived here or even visited for Umrah, would tell you that it is the most peaceful city in the world and a place where one’s heart is at rest. It is a city that occupies a special place in the hearts of Muslims across the globe. Never in a million years had it ever crossed our minds that someone would try to attack the sanctity of this city and the worshippers praying in this Masjid especially during the holy month of Ramadan and less so in the last ten nights.

Yesterday, on the 30th night of Ramadan 1437, near “Jannatul Baqi”, the graveyard where a large number of the companions of the Prophet (sall Allāhu ʿalayhi wa sallam) are buried, a car exploded killing four and injuring five others.

As the residents of Madinah, we had just received the joyous news that the moon of the new month of Shawwal had not been sighted meaning that we would be honoured with another day of Ramadan to fast and another night to pray. Almost immediately after, I received the surprising news of an explosion near the Prophet’s masjid. In the three years I have lived in Madinah as a student in the Islamic University, I have never heard of such an incident. According to local reports, the incident occurred just after the adhan of Maghrib as worshippers were breaking their fast. I was not close to the scene at the time of the blast, but I initially received reports of an explosion near the masjid along with photos from those who were present at the time. Initially it was being reported that a car gas canister leak was the cause, to which I sighed a sigh of relief. I thought this was the most probable cause as car incidents are common in Madinah and Saudi Arabia in general. Car maintenance is not really high up on the priority list of the people of this country.

As the hours passed, there were more and more reports that the explosion was due to a suicide bomber and the news was then, sadly, officially confirmed by the Saudi News Agency. That same night, barely a few hours after the attack, the people flocked to the Prophet’s Masjid to pray Isha and Tarawih. Usually those who live on the outskirts of the city do not pray in Masjid Nabawi everyday due to the distance, however, on this night, the masjid was just as full as ever, maybe even more so than usual. Perhaps the people of Madinah wanted to demonstrate that they refuse to be deterred from visiting and praying in the masjid for which they are rewarded a thousand times more than praying in any other masjid – except for Masjid al Haram in Makkah.

As of yet, no group has claimed responsibility for this atrocious act but, if it was in fact perpetrated by the Khawarij, then killing people in Ramadan is nothing new to them. An incident occurred in the past, on the 17th of Ramadan, in which the Khawarij threatened some of the companions of the Prophet (sall Allāhu ʿalayhi wa sallam). Abdur Rahman ibn Muljim (one of the Khawarij) along with several others, went to a masjid in order to kill those whom they believed to be the tyrants of their time; which included none other than the cousin of the Prophet (sall Allāhu ʿalayhi wa sallam) Ali b. Abi Talib; as well as Muawiyyah b. Abi Sufyan and Amr b. Aas (raḍiy Allāhu ʿanhum). The incident led to the death of Ali (raḍiy Allāhu ʿanhu).

Allah says in the Qur’an:

“O you who have believed, do not raise your voices above the voice of the Prophet or be loud to him in speech like the loudness of some of you to others, lest your deeds become worthless while you perceive not.”[1]

However, we should not think that the criminals behind this attack will be left unpunished. In many authentic narrations it is mentioned that Allah will deal with the criminals who try to harm the people of Madinah. In an authentic hadith it is narrated by Sa`d that he said: I heard the Prophet (sall Allāhu ʿalayhi wa sallam) saying,

“None plots against the people of Madinah but that he will be dissolved (destroyed) like the salt is dissolved in water.”[2]

“Madinah is a sanctuary from that place to that. Its trees should not be cut and no heresy should be innovated nor any sin should be committed in it, and whoever innovates in it an heresy or commits sins (bad deeds), then he will incur the curse of Allah, all the Angels, and all the people at large.”[3]

Furthermore, it is narrated that the Prophet (sall Allāhu ʿalayhi wa sallam) said:

“Whoever terrifies the people of Madinah through oppression, Allah will terrify him. The curse of Allah, His angels, and all humans will be upon him. Allah will not accept his compulsory or optional good deeds on the Day of Judgement.”[4]

Despite the sadness of this event, the Muslims should not use this tragedy to discourage others from coming to Umrah or visiting the two blessed cities due to “security issues” or anything similar. It is Allah who will protect the blessed masjids. Spreading the news to inform people is fine, spreading the news with the intention of discouraging others to visit is blameworthy.  Allah determined the time of our deaths fifty thousand years before He created the Heavens and the Earth, so regardless of place and time, our death will reach us at the decreed time.

As shocking as this incident is due to its location, the Muslim Ummah is one body, so regardless of whether someone is killed in Madinah or elsewhere, we should equally remember our brothers and sisters in other parts of the world. The Prophet (sall Allāhu ʿalayhi wa sallam) said: “The blood of a Muslim is worth more than the Ka’ba [the holiest site in Islam] and all its surroundings.”[5]

This attack, along with the numerous other attacks in other parts of the Muslim world, just goes to prove that terrorism has no religion.

Previous: Eid Announcement 1437
Next: The Bloody Legacy of Western Imperialism in Iraq