The Scandal of the Panama Papers 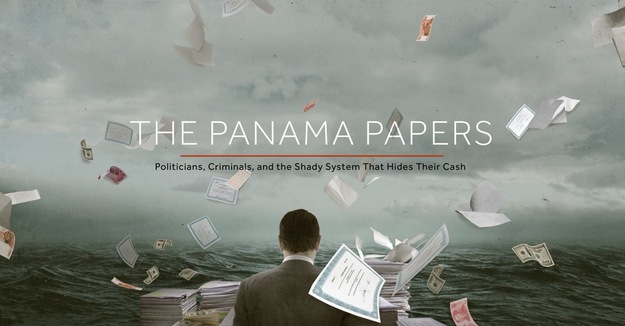 The Biggest Data Leak in History

In the last day or two we have seen the beginning of the unravelling of what Edward Snowden has dubbed “the biggest leak in the history of data journalism.”[1] This is the year-long global investigation led by over 400 journalists from more than 80 countries, known as the Panama Papers.[2]

These are 11.5 million leaked documents—totalling 2.6 terabytes of data—that show the inner workings of Panamanian law firm Mossack Fonseca, and the 214,000 offshore companies with which it has helped the global elite hide vast amounts of wealth. It exposes an underground industry led by major banks, financial institutions and legal firms that secretly manage the estate of many of the world’s richest, including heads of states, politicians, oligarchs, fraudsters, Mafia cartels, drug smugglers and celebrities.

Although it has hardly been 48 hours since the initial results of the investigation opened to the public, the consequences have been devastating for some. Only hours ago the Prime Minister of Iceland resigned due to protests over allegations of his family hiding millions in offshore accounts.[3] David Cameron has been embarrassed by many Tories and even his late father was exposed as running offshore funds to avoid paying tax in Britain.[4] Jeremy Corbyn has taken advantage of this by calling for an investigation into the Prime Minister’s family’s tax affairs.[5]

We approach this with a degree of scepticism, as it is not entirely clear whether or not this is a diversion to serve a greater political game at play. We note that not many western elite seem to be part of the initial exposé. However, due to the sheer number of journalists involved from different countries and the number of news agencies covering the news, at least the initial claims seem to enjoy some level of credibility.

The shadowy world of offshore shell companies is not just used for avoiding tax. Some of the most vile individuals, organisations and regimes around the world have been exposed in the Panama Papers, including those who have been financing the tyrant Bashar al-Assad in his slaughter of hundreds of thousands of innocent Syrians, and thus profiting from war in Syria.[6]

The leaks have sadly also highlighted the great abyss between the integrity and righteousness of today’s Muslim leaders and those of yesteryear who brought honour to the name of Islām. Whereas once, righteous leaders such as the first successor to the Prophet (sall Allāhu ʿalayhi wa sallam), Abū Bakr al-Siddīq (raḍiy Allāhu ʿanhu) went to war with those tribes that refused to pay their zakāh which was owed to the poor, many of today’s political leaders have themselves been exposed as some of the worst offenders when it comes to hoarding vast sums of their respective peoples’ money in offshore companies,[7] whilst the latter are literally dying of hunger and thirst.[8]

Gone are the days of ʿUmar b. ʿAbd al-ʿAzīz in a polity whose borders stretched from North Africa to the Far East where they were unable to find someone poor enough of receiving zakāh. Is it any surprise how careful these leaders were with the money of the Muslims? It is reported that ʿUmar b. ʿAbd al-ʿAzīz wrenched a date out of the mouth of his child who innocently took what belonged to the Ummah.[9] He would order his people not to write official letters on complete pieces of paper, and would not even use the same candlelight during official and personal conversations out of fear of squandering “the wealth of the Muslims.”

It is, in fact, a well-known feature of Islamic law to prevent both the hoarding of wealth and its circulation among a few hands:

“And what Allāh restored to His Messenger from the people of the towns – it is for Allāh and for the Messenger and for [his] near relatives and orphans and the [stranded] traveller – so that it will not be a perpetual distribution among the rich from among you. And whatever the Messenger has given you – take; and what he has forbidden you – refrain from. And fear Allāh; indeed, Allāh is severe in penalty.”[10]

The flow of wealth through an economy is like blood through a living body; vital for life. Some of the harshest punishments described in the Hereafter are for unjustly hoarding wealth:

“O you who have believed, indeed many of the scholars and the monks devour the wealth of people unjustly and avert [them] from the way of Allāh. And those who hoard gold and silver and spend it not in the way of Allāh – give them tidings of a painful punishment.

“The Day when it will be heated in the fire of Hell and seared therewith will be their foreheads, their flanks, and their backs, [it will be said], ‘This is what you hoarded for yourselves, so taste what you used to hoard.’”[11]

Leaks such as this often remind us of the Day of Judgement, when all of our secret deeds will be exposed for all to see, save those that Allāh wipes away out of His mercy. We should not feel safe that, just because we do not squander the wealth of others to the extent that tyrants do, due to our greed or negligence, that we will not be treated like them on the Day of Judgement. According to the famous ḥadīth,

The leaks also indicate the extent of the US capitalist empire which John Perkins exposed years ago to the dismay of what he called the ‘Corporatocracy’.[13] In his powerful book—which I believe anyone who wants to understand the 21st century world should read—called Confessions of an Economic Hit Man: The shocking story of how America really took over the world,[14] Perkins confesses how he helped create an efficient system of enslaving foreign countries to US economic, political and military domination by enriching dictators or corrupt ruling families at the catastrophic impoverishment of their respective peoples.

In fact, if one studies the disastrous impact of un-Islamic systems of economics, from the economic imperialism bleeding the developing world to the finely tuned Reaganite/Thatcherite systems of funnelling public wealth into private pockets in the so-called ‘developed’ world, one thing becomes clear. One cannot help but remark that Islām (or Islamic practices) would only serve to materially benefit and empower the vast majority of human beings—Muslim and non-Muslim—and threaten only a few of the global elite, perhaps those very names mentioned in the Panama Papers. It is no wonder, therefore, that those who stand to lose the most out of the justice and transparency of the Sharīʿa happen to be at the forefront of the Islamophobia industry.

[14] Available in print here and in audiobook here