The Suffering of Statues 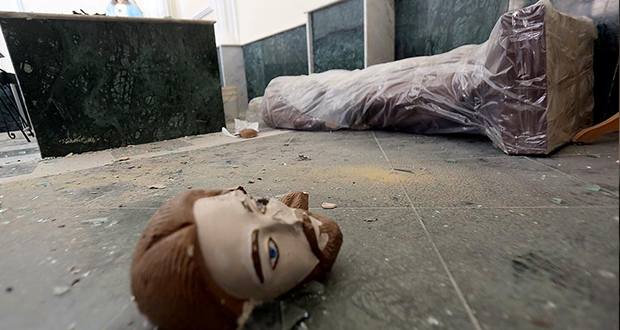 Robert Spencer is a vile Islamophobe. So disturbing and divisive are Spencer’s views on Muslims that even the Home Secretary Theresa May denied him entry into the UK [1]. He and his fellow hate preacher, Pamela Geller, were prevented from coming to the Britain to speak at an EDL march in Woolwich, where Lee Rigby was killed.

Spencer recently posted an article entitled “Islamic Outreach in Syria: Islamic Jihadists Desecrate Church, Smash Icons and Statues” [3]. This article caught my attention because it kept appearing on my timeline on Facebook, posted there by Muslims. The motivation for posting the article was for some Muslims to illustrate how other Muslims are “barbaric”. This narrative is one pushed by the West to polarise opinion and divide Muslims over what started off in Syria as a genuine desire to rid a people of an oppressive dictator, al-Assad, but has been manipulated by outside interests into a faux sectarian conflict.

The mainstream media coverage of Syria has flipped 180 degrees from a description of an oppressed people protesting against their oppressor and being massacred by him, to one of Muslim barbarity towards icons and statues. No longer the photographs of human suffering and death but one of smashed idols and an attempt to elevate people’s fear against the Muslims returning from Jihad in Syria.

Is it true that Westerners have become more distressed seeing destroyed statues than seeing destroyed human lives? I think so. Minds have been manipulated this way. The Western mind is shocked at the sight of a toppled and broken statue in the media but does not reflect on the plight of the refugees or the bereaved. Why does the media not show people the dead children in Syria (or Palestine)? Are we seeing an attempt to remove the human suffering aspect parallel to escalating the notion that Muslims are destructive savages who have no value for “history” or “art”? Is a broken statue more shocking than a destroyed village with all its broken homes and families?

This narrative has been repeated many times, from the Buddahs of Bamiyan in Afghanistan [4] to the shrines of (so-called) Muslim saints in Timbuktu [5] and the destruction of the gold dome of the al-Askari mosque in Iraq. One thing common to these incidents is that bodies such as UNESCO and the International Council on Monuments and Sites (mentioned in [3]) will find money and expertise to rebuild such sites [6], even whilst the people of those countries are still living with the remnants of the great destruction and long-term poisoning caused by Western “intervention”.

How can it be that the people of the West put so much value on icons and statues whilst so much human suffering is evident? Are the roots of this in the teachings of present day Christianity, where statues are revered in churches? Jesus (‘alayhi al-Salām) lived a very simple life and nowhere in his teachings do I find other than his servitude to his Lord and his great care for the downtrodden and oppressed. Jesus’ (‘alayhi al-Salām) ministry was to care for the hungry and poor and spread the message of tawhīd, but the religion named after him as it is practised today unfortunately involve reverence to statues.

Growing up as a Christian, I was accustomed to seeing statues in the church. However, I was never honestly comfortable when a priest would make a curtsey in front of a statue of the Virgin Mary. It wasn’t until I accepted Islām that I learned that my natural instincts to reject rituals involving idols were correct. In fact, the Commandments given to Moses (‘alayhi al-Salām) on Mount Sinai make it clear that modern day Christianity is very far from the Message given to the Prophets.

The 1st Commandment given to Moses (‘alayhi al-Salām) still present in the previous scriptures was:

“Hear O Israel thy Lord God is ONE.  – The 2nd is “you shallt have no other god before me”.

So the very first thing that God gave Moses (‘alayhi al-Salām) to teach to his followers, Bani Isrā’īl, was tawhīd [7], and his understanding of tawhīd was what led him to be so infuriated by their making of the golden calf.  This message is entirely in keeping with what God taught about idolatry to Abraham (‘alayhi al-Salām) and all of the Prophets. The Jews have stuck to this commandment and do not have statues in their places of worship, nor do they use images of living things.

God’s Commandments go on to warn about making Shirk.

Now to look at Islām. We as Muslims know that central to our faith is tawhīd, and although sūrah al-Ikhlās is a very short sūrah it is one which encompasses tawhīd and is given a value of one third of the Qur’ān in the value and importance of its message [8].

Can we therefore call those who break statues backward savages? Other than the clear message of tawhīd in the Bible and the Qur’ān, we Muslims also have ahādīth that explain how statues were dealt with:

Alī b. Abī Tālib said: “Shall I not send you with the same instructions as the Messenger of Allaah (peace and blessings of Allaah be upon him) sent me? Do not leave any image without defacing it or any built-up grave without levelling it.”

‘Urwah b. ‘Abasah that he said to the Prophet (peace and blessings of Allāh be upon him): “With what were you sent?” He said, “I was sent to uphold the ties of kinship, to break the idols, and so that Allāh would be worshipped alone with no partner or associate.” [9]

My own personal understanding is very simple and instinctive, I do not hold any Islamic qualification. Personally however, I can say that I wish for all my Christian friends, family and others that they would understand their scripture with the same clarity that the Prophets understood it. I really wish that my former priest would leave his curtseying to the statue of the Virgin Mary and his worship of the creation and dedicate all his devotion to the Creator. I wish that Western people, Christian, Atheist or otherwise, would have their eyes and hearts opened to the suffering of real children and families in Syria and other lands where there is injustice. Human life is worth so much more than a statue.

Share. Facebook Twitter LinkedIn Email Telegram WhatsApp
Previous ArticleMuslims are taking over the country! One restaurant at a time…
Next Article A statement of concern from the Muslim community