Trevor Phillips can’t be Islamophobic, he has Muslim ancestors! 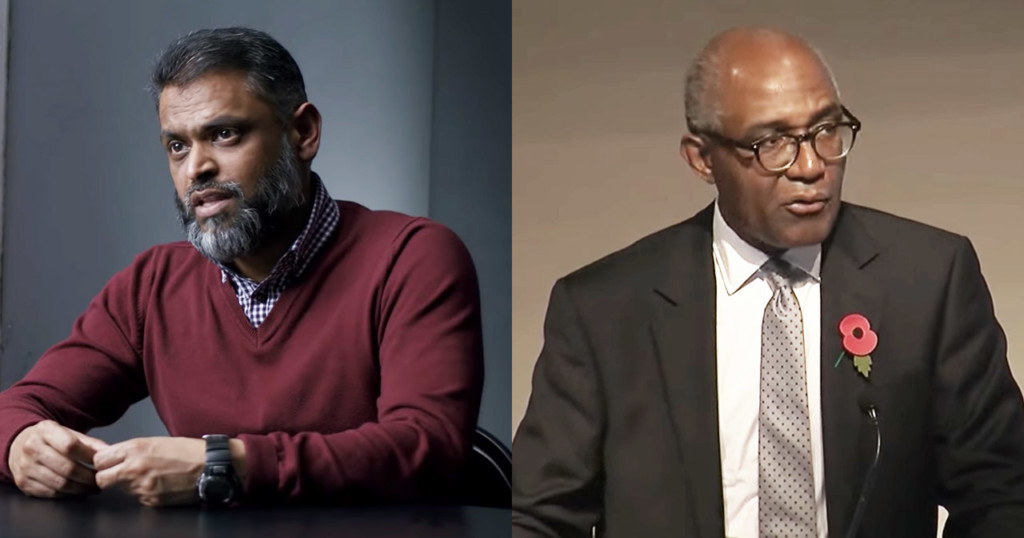 Trevor Phillips’ suspension from the Labour party for Islamophobia is yet more evidence that disdain for Muslims crosses the political divide.

Islamophobia in the Conservative Party is rife. They’ve been in denial about it for a long time and have done very little to challenge it within their ranks.

Boris Johnson finally apologised for it last year.[1] Despite regularly justifying Islamophobia before becoming Prime Minister and mocking Muslim women’s attire after,[2][3] Johnson has often cited his Turkish Muslim ancestry to prove how he can’t be an Islamophobe.[4]

But I have Muslims in my family!

Another prominent figure accused of Islamophobia also cited his Muslim ancestry. Trevor Phillips, who was suspended from the Labour Party this week, wrote for the Times,[5] in his defence, how he is a descendant of West African Muslim Fulani and Mandinka tribes who’d been “ripped apart” by slavery. He even has Muslims family members.

In his Times piece, Phillips pointed out how he introduced the term “Islamophobia” into British politics as far back as 1997. How, then, could he be accused of the very thing he helped to identify?

Despite his ancestry, Phillips has praised aspects of colonialism and defended its proponents.[6] Some would argue that Phillips has changed over the years. Others would say he is merely exposing his true colours.

Phillips was a television producer, receiving an OBE for his efforts. However he is best known for his role as former head of the Commission for Racial Equality and its successor, the Equality and Human Rights Commission (EHRC). The EHRC was established to protect rights,[7] including those of religion. Phillips’ tenure, however, was beset with resignations of senior members and internal disputes following allegations of “divisive leadership”.

Phillips’ friend and colleague, Sun and Daily Mail columnist Richard Litteljohn – who has written disparaging columns about Muslims – claimed in an article entitled,[8] We’re all going to hell in a hijab, that Phillips’ intentions about the EHRC were far more nefarious:

“I should remind readers that Trevor is a long-standing friend of mine…When he took a break from journalism to seize the poisoned chalice that is the chairmanship of the Equality and Human Rights Commission, he told me he had only done so because he wanted to close it down.”

Phillips has been a member of Labour since 1996 and even ran as the mayoral candidate for London as Tony Blair’s preferred choice prior to the election of Ken Livingstone.[9] When Phillips was offered the role of deputy mayor, however, he wasn’t happy. He accused Livingstone of racism and found his offer “patronising” and that it betrayed a lack of sensitivity towards ethnic minorities. But, Phillips was about to demonstrate his own lack of sensitivity towards Britain’s minorities.

Phillips has been deeply critical of multiculturalism and warned in 2005 that Britain was sleepwalking into segregation.[10] Whilst there are valid arguments against “ghettoisation” in some parts of Britain, Phillip’s main contention since has been with Muslims.

In 2016, Phillips presented a Channel 4 documentary called What British Muslims Really Think.[11] In the film, he concluded that Muslims were a “nation within the nation, with its own geography, its own values, and its own very separate future.” He argued that polls suggested that Muslims’ views on law and order, women, homosexuality, terrorism, and integration were not in line with the rest of the nation. Many Muslims questioned yet another need to interrogate what “they” thought while others just laughed at it with a twitter hashtag.[12]

Others explained how Muslims were not a monolithic group and how views diverged on many non-core issues.[13] One viewer summed up Phillips’ binary view: “You’re either a liberal Muslim or slightly extreme.”

In August 2017, The Times led with a sensationalist headline: Christian child forced into Muslim foster care.

The story led to a national debate and inflamed anti-Muslim sentiment which had already reached unprecedented levels. Many Muslims contested not only the headline but also the veracity of the story.

Phillips entered the fray. Writing for The Sun, he railed against Tower Hamlets Council which he accused of choosing to to “value their pro-Muslim reputation above the welfare of the child” and likened the decision to “child abuse”.[14]

There was just one problem. The Times only reported one side of the story.

Following a complaint by Tower Hamlets Council to The Independent Press Standards Organisation (IPSO), it became clear that story was based on half-truths. IPSO ruled that it was a distortion of the facts.[15] The child in question had actually been placed into the care of her grandmother. BBC Radio 4 show The Corrections- which “revisits…news stories which left the public with an incomplete picture of what really happened” – leaves the listener with little doubt that facts were precluded,[16] omitted, and not fully investigated in order to create a sensational story about Muslims.

Phillips has yet to write an apology for his role in fuelling the fake story. In fact, he continued peddling anti-Muslim views and prediciting omenous times ahead.

In his essay,[17] ‘Race and Faith: The Deafening Silence’, Phillips warns: “Rome may not yet be in flames, but I think I can smell the smouldering…” Enoch Powell’s “River of Blood” speech comes to mind, only this time it’s a black man making it.

Phillips continues by lambasting “the kind of ethnic takeover of state schools” following “Trojan Horse”[18] scandal, failing to mention that it was a hoax, fuelled by lies and Islamophobic agendas that have now come to light. The effect of these lies have had a devastating effect on education in Birmingham’s Muslim community.

The essay continues with Phillips observing that many men convicted for grooming and sexually abusing children in British towns were from Muslim backgrounds. He laments that reporting on this was “branded prejudice by some – but surely honest journalism, unburdened by fear of causing offence, should be beyond contention.”

Phillips’ suggestion is that the race/religion of these men plays an important role in their behaviour. But he omits two things obvious to most Muslims. First, extra-marital sexual relations, consuming alcohol, taking drugs, and abusing children are amongst the major sins in Islam. Behaving in this way is anti-Islamic. Second, other faiths or ideologies are not tarred by the actions of criminals from within their communities. If anyone knows that, it should be Phillips.

Far right to the rescue

In truth, Trevor Phillips believes that “Muslims are not like us.”[19] He’s said it too many times for there to be any doubt.

As a Labour member, Phillips makes no apology for writing his views about Muslims in the right wing tabloid and broadsheet press. He appears to have pinned his colours to his Islamophobic mast. Those on the far right welcome him with open arms.

James Delingpole, a climate change denier who writes for US far right website Breitbart, wrote in support of Phillips documentary about British Muslims.[20] It is easy to understand where Delingpole comes from. He describes himself as a member of the “most discriminated-against subsection in the whole of British society” who are “are the white, middle-aged, public-school-and-Oxbridge educated middle-class male.”[21] He also reportedly took drugs with David Cameron at university.

Even more delectable far right ant-Muslim activists like Tommy Robinson and Katie Hopkins have rallied in support of Phillips as his views increasingly align with theirs.[22]

Phillips disagrees with the All Parties Parliamentary Group (APPG) definition which describes Islamophobia as a “kind of racism” hostile to “Muslimness”.[23] He presents an argument touted by the far right. “Muslims are not a race.” Indeed, that is true. Islam spans all races; thousands of white people embrace Islam every year. But they are often discriminated against once they outwardly appear Muslim. In truth, those who hate Islam and Muslims see us as one. One race, one religion, and one problem.

Judaism is one of the world’s great monotheistic religions. Its adherents have distinct dietary laws, language, dress codes, societal norms, holidays, business, and fiscal mores. And, whilst Jews are not one monolithic group, discriminating against them on the basis of their faith and race is anti-Semtism.

The Nazis used the “difference” of the Jews of Europe to “otherise” them before trying to exterminate them.

I travelled to Bosnia several times during the war and witnessed some of the atrocities that took place there. The biggest genocide after the holocaust was carried out against one of Europe’s only indigenous Muslim populations. Between 1992-1995, over 100,000 Bosnian Muslims were systematically raped, killed, and ethnically cleansed because of their faith.

It is ironic that in spreading and denying Islamophobia and being accounted for by his own party, Phillips writes that he’s the “victim” of “persecution”.

What Phillips really wants is the soul of Islam, but he’s not getting it.

Writing for the Daily Mail, Phillips says there is a “life-and-death struggle for the soul of British Islam – and this is not a battle that the rest of us can afford to sit out. We need to take sides.”[24]

That much I’d agree.