Quranic Community #17 | What gives you the Right to Ridicule? 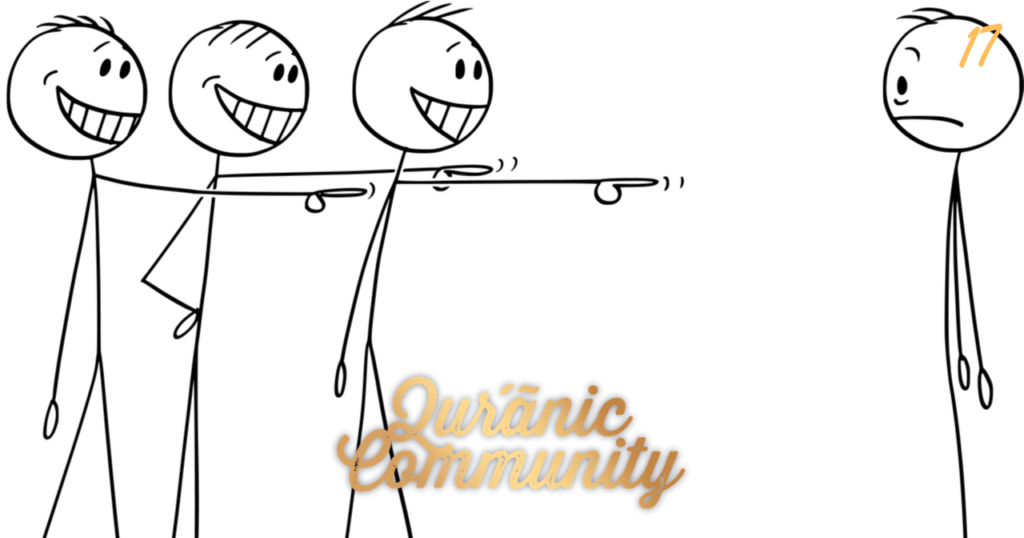 Al-Ḥujurāt follows a natural progression of events, furnishing the Qur’ānic community with guidance in each verse. Those in conflict due to unverified news are entitled to their siblings in Iman coming to their rescue, seeking the restoration of peace and the merciful ties of brotherhood. It reminds us of the reality of this unrivalled social union. The previous section concluded with Allāh showing His mercy towards those who show mercy to fellow believers by rekindling that firm sense of Ukhuwwah amongst one another.

On top of achieving outer physical peace, the true sense of brotherhood can only be achieved through embodying Allāh’s Taqwa and dispelling those inner actions that are bound to diminish it. It is therefore appropriate that this section outlines those actions that create malice and bitterness – both those done in the presence of your siblings and in their absence. If previous verses defined the treatment required between conflicting groups, the verses in this section will extend such etiquette to each and every individual within the society.

“You who have Iman! People should not ridicule others who may be better than themselves; nor should any women ridicule other women who may be better than themselves. And do not find fault with one another or insult each other with derogatory nicknames. How evil it is to have a name for evil conduct after coming to Iman! Those people who do not turn from it are wrongdoers.”[1]

“It may be that a person exposed for his sin is better than a person whose sin has been hidden … (after all) how do you know your hidden sin will be forgiven?” Besides the specific example, the prohibition is general and encompasses each and every type of mockery directed at a believer.[2]

The indefinite form ‘Qawm’ (‘people’) is not only used to indicate how widespread ridiculing was and is, it is also used to encompass every nation and every people, regardless of their social status or their feeling of social privilege or superiority. ‘Qawm’ linguistically points to a group of men. The repeated prohibition towards ‘Nisā’ (‘women’) is to leave no segment of society unaddressed directly and in case women mistakenly think the address is exclusively directed at men.

‘Qawm’ can also linguistically encompass women.[3] The emphatic specification of ‘Nisā’, in this latter case, can then be seen to address the fact that ridicule and gossip is especially rampant in female social circles. Research in gender-specific social behaviours proves this is “more than just anecdotal”, and instead, is leant to the nature of women being obsessed with news about other women.[4] This does not imply women are more aggressive than men, but that they are different in how they dispense that aggression, i.e. through words rather than actions. Other social realities are more rampant in men, such as theft, meaning that Allāh will instead admonish men more than women on those occasions!

“(It may be that) those ridiculed are better than those who are ridiculing” is to emphasise the prohibition by mentioning what is commonplace: that those being ridiculed are better than the perpetrators. This part of the verse thus evokes a sense of shyness in the heart of the one ridiculing. It should not be understood as a dispensation to ridicule if one is sure that their victim is worse than him or her![5] In fact, it can be reasoned that most of the time the one being ridiculed is better than the one who is ridiculing since only those whose hearts are full of faults, pettiness, and genuine inferiority find it pertinent to ridicule others.[6] It has been authentically reported that the Messenger (sall Allāhu ʿalayhi wa sallam) said:

“Pride is to disdain the truth (out of self-conceit) and to hold contempt for the people.”

Ridiculing is therefore a consequence of the very definition of Kibr; to look down on others.

“And do not find fault with one another”, meaning, do not malign or defame one another. The word ‘anfusakum’ can both refer to ‘one another’ and ‘yourselves’. ‘Do not malign yourselves’ delivers the meaning that maligning and defaming your siblings in Islam is tantamount to defaming your very self, because the believers are but a single body. They are siblings, as set out in the previous verse, emerging from a single self (Nafs). Allāh says in another verse:

“Woe to every scorner and mocker.”[7]

The ‘Hammāz’ is the one who maligns by way of action, and the ‘Lammāz’ (as appears in the verse of Al-Ḥujurāt) is the one who does so with his tongue. Both are quick at finding fault and, as such, are belittled in the eyes of others.[8]  ‘Al-Lamz’ is to mention someone’s flaws directly to their face – if these flaws are in truth, then such is shameless and assaultive, and if untrue, then such is shameless and slanderous.[9]

What is rendered as “and do not insult each other with derogatory nicknames” contains the terms ‘al-Nabz’ and ‘al-Laqab’. Both are similar in meaning and the verse can be understood as “do not label others with labels.” More specifically, the prohibition covers names that people hate to be called. This includes calling the Muslim ‘ya Fāsiq’ (‘deviator’), ‘ya Zāni’ (‘fornicator’), ‘ya Munāfiq’ (‘hypocrite), ‘ya Kāfir’ (‘disbeliever’), and the like. It furthermore includes names that serve to remind a person who has accepted Islam of their actions before their Islam or of their bad actions after their desistance and repentance. This can be generalised to encompass every label or characteristic disliked by its recipient.[10]

“How evil it is to have a name for evil conduct after coming to Iman”. The Arabic text of the verse can be understood as follows: if you insist on giving one another derogatory labels, sinning against Allāh after having Iman, and ridiculing the believers, then such a labeller himself earns the name of Fāsiq (‘deviator’). Others have said, as is the chosen meaning in the translation, that Allāh is declaring the evilness of labelling a Muslim with the label of fusūq despite them being Muslims. Despite both meanings being carried by the verse, al-Tabari favours the first and sees it more fitting with the context of admonishment.[11] That admonition is, moreover, suited to the original offence. Throwing accusations of fusūq rebounds back to the source, as in the oft-mentioned maxim: you reap what you sow.

“Those people who do not turn from it are wrongdoers”, meaning that whoever does not repent from labelling, defaming, or ridiculing their siblings in Islam have wronged themselves and become deserving of Allāh’s punishment.[12] How then does such a person become a ‘Dhālim’ (an oppressor)? He becomes such by way of having oppressed his victims. But on top of that, he has also oppressed his own self by wilfully exposing it to punishment in the Hereafter despite being very able to desist. With the severity of hell in mind, the latter oppression trumps the former. Fascinatingly and correspondingly, the wording of the verse stresses that the culprit is the exclusive victim of their assault! “Those (the culprits) are (ulā’ika), themselves (hum) the Dhālimūn.”[13]

Ridiculing your sibling can never be justified

One is never in a position to ridicule. This is because, if the deficiency is in his or her victim’s religion or manners, it becomes incumbent on the one who identifies this to rectify it. If the deficiency is of a physical nature, then one should show respect towards the One who created him or her that way, recognising one’s own countless physical deficiencies. Ridicule, as mentioned, only comes from people who deem themselves superior in a certain aspect over their victim. Had the culprit thoroughly considered other elements in their victim’s life, they would see that the victim supersedes them in many other things. Whilst people are ultimately equal, they are primarily, intentionally unequal. This divine will is to facilitate society’s function. Society demands that people excel one another in its different spheres, otherwise they would never be able to complement one another. One person cannot excel in everything. Allāh says in another verse:

There must exist those who are above in aspects over others below. If a prince were to enter his palace and find that the sewage system was faulty, he would rush to hire a plumber or cleaner to fix the appalling smell. In such an example, the prince is above the plumber in the sphere of wealth, but the plumber is above the prince in his crucial ability to fix drains! Without the cleaner, the prince’s life would be miserable and dysfunctional. The just person understands that although people are different in certain aspects, they are ultimately equal if all of their abilities are assessed collectively. Such a person, therefore, can never find justification to ridicule.

May Allāh guide us to the best manners and ethics. And all strength is from Allāh.