Two days left for Moazzam Begg. Why remember him? 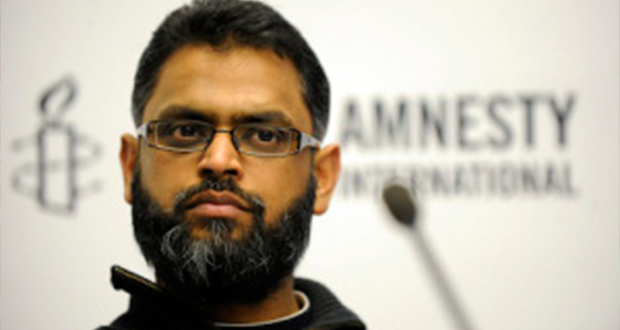 Moazzam Begg has his court hearing later this week inshā’Allāh (God Willing), on Friday the 2nd of May 2014, to consider his bail application. Of course, Moazzam is just one individual and many may ask why he should be supported and with so much going on elsewhere, why should we all exert our efforts on this issue?

It was the sixth year after Hijrah, in the month of Dhul-Qa’dah (11th month of the Islamic calendar) that the Messenger of Allāh (sall Allāhu ‘alayhi wa sallam) and 1,500 of his Sahābah (Companions) (may Allāh be pleased with them) headed towards Makkah, to perform the ‘Umrah (lesser pilgrimage) [2].

The Messenger of Allāh (sall Allāhu ‘alayhi wa sallam) sent a man from the tribe of Khuzā’ah to spy and report back to him regarding the Quraysh. So the spy returned, and informed the Prophet (sall Allāhu ‘alayhi wa sallam) that the Quraysh had gathered those who lived around Makkah against him, and formed a pact to fight him and the Sahābah if he continued with the intention of entering Makkah to visit the Ka’bah (the House of Allāh). So the Messenger of Allāh (sall Allāhu ‘alayhi wa sallam) took consultation from his companions as to whether they should fight the Quraysh. Abū Bakr (radiy Allāhu ‘anhu) said: “Allāh and His Messenger know best! We only came here to perform the ‘Umrah, and we did not come to fight anyone. But if anyone comes in between us and the House (i.e. Ka’bah), then we will fight him.”

So when they neared Makkah, and the Quraysh were alarmed of their coming, the Messenger of Allāh (sall Allāhu ‘alayhi wa sallam) decided to send one of his Sahābah to them. So he called upon ‘Umar b. al-Khattāb (radiy Allāhu ‘anhu), to send him to them. So he said: “O Messenger of Allāh! I do not have anyone from Banū Ka’b who would be angered on my behalf if I were to be tortured. So send ‘Uthmān b. ‘Affān, for indeed he has his relatives there, and he is capable of conveying what you want.” So the Messenger (sall Allāhu ‘alayhi wa sallam) called upon ‘Uthmān, and sent him to the Quraysh, and ordered him to notify them that they did not come to fight; they have only come to perform the ‘Umrah. He also asked him to call them to Islām and to go to the believing men and women of Makkah and give them glad tidings of the Victory, and to notify them that Allāh (Most High) will make His Religion manifest, such that no one would have to hide their Īmān (faith) [3].

So ‘Uthmān went forth, and went to the Quraysh. They asked him: “What do you want?” He replied: “The Messenger of Allāh sent me to call you to Allāh and to Islām; and that I notify you that we did not come to fight, we have only come to perform the ‘Umrah.” But the Quraysh were inflexible and were not prepared to allow them to visit for the ‘Umrah and although they offered ‘Uthmān the chance to perform it himself, he declined stating that he would not perform Tawāf (circumambulation) around the House while the Messenger of Allāh (sall Allāhu ‘alayhi wa sallam) and the other Sahābah were being prevented from it.

The Bay’ah of Ridhwān – every bit of it is speaking about the Believers, and speaking to the Believers, to that unique, joyous assembly which gave their Pledge of Allegiance to the Messenger of Allāh under the tree and Allāh was Witness to the taking place of this Bay’ah, and “His Hand was above their hands” [6]. And Allāh says concerning this blessed assembly:

“Indeed, Allāh was pleased with the Believers when they gave their Bay’ah to you (O Muhammad) under the tree, He knew what was in their hearts, so He sent down tranquillity upon them, and He rewarded them with a near victory.” [7]

I have narrated this story to you to emphasise and remind you how the Messenger of Allāh (sall Allāhu ‘alayhi wa sallam) and the first generation of Muslims regarded the honour of one Muslim, so much so that they pledged their lives for one life and so much so that Allāh revealed verses concerning this noble incident as a reminder to us and for all times that we must never abandon another believer. And today, after one thousand, four hundred years and more, we can try to sense the honour of that holy moment by standing for our brother Moazzam – let us stand as they stood obediently, as Muslims and patiently so that He, jalla wa’alā can send his tranquillity upon us as He did with them and that He may reward us and our brother with a near victory over those who seek to silence those who expose the injustices within our society.

What is being asked of you and me is far less than that asked of those noble Sahābah in incident mentioned where they pledged their lives. We are merely being asked to commit ourselves to raising awareness, joining the campaign and above all, raising our hands in Du‘ā (supplications), particularly at the time of Tahajjud (standing in prayer in the early hours) as Abū Hurayrah (radiy Allāhu ‘anhu) reports that the Messenger of Allāh said:

Even if Moazzam’s bail application is unsuccessful, then know it would not be the State’s decision. No, it would in fact be Allāh’s decision to keep his ‘Abd (servant) with him for as long as He wills, not the Judges’, the corrupt Establishment or anyone else’s for that matter. And has not Allāh taught us how to deal with set-backs when the Ummah was at the juncture of the greatest loss, the greatest catastrophe that was to ever hit this Ummah, the death of the Messenger of Allāh (sall Allāhu ‘alayhi wa sallam)? Therein Allāh advises us that no matter how great the setback, the struggle between truth and falsehood, justice and injustice must continue. Let us end by reminding ourselves of this critical advice from Allāh:

“Muhammad is no more than a messenger: many were the messengers that passed away before him. If he died or were slain, will ye then turn back on your heels? If any did turn back on his heels, not the least harm will he do to Allāh; but Allāh (on the other hand) will swiftly reward those who (serve Him) with gratitude.” [9]