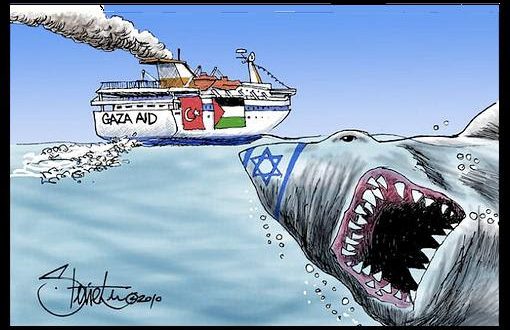 As a passenger of the Mavi Marmara, the Freedom Flotilla that set sail for Gaza in May 2010, I stand side-by-side with people of different nationalities, political leanings and faiths in believing that it is incumbent on ordinary civilians to strive for justice where governments lack the political will to do so.

Last week many of the survivors of the brutal Israeli aggression against the Freedom Flotilla—which led to the deaths of nine humanitarians and wounded 156 others (52 of those seriously)—met in Istanbul for another court hearing against four named Israeli military leaders. The court met to hear evidence from flotilla survivors with a view to issuing arrest warrants against Israel’s former Chief of Staff Lt. General Gabi Ashkenazi, Former Israeli Navy head, Vice Admiral Eliezer Marom, former Israel Air Force intelligence chief Avishai Levy and former Military Intelligence head Amos Yadlin. The charges are “inciting to kill monstrously and torturing[1].” It was interesting to learn that in October 2013 Eliezer Marom had been briefly detained and questioned at Heathrow airport on his arrival in the UK[2].

In addition to the court hearing, the Turkish charity I.H.H arranged a conference on International law attracting more than 60 lawyers from various countries including South Africa, the USA and Turkey among other European countries. The case of the flotilla is ground breaking in its aims and complexity and clearly attracts much interest amongst legal professionals.

“We are the conscience of the people.”[3]

Those who participated in the flotilla consider it a moral duty to continue standing for human rights and justice and wish to carry on working towards bringing an end to the impunity that Israel clearly expects. Our mission is not over until the siege is lifted and it is always encouraging to hear Turkish Prime Minister Erdogan constantly reiterating that the lifting of the siege is one of the conditions that must be met before normal relations between Turkey and the State of Israel can resume[4].Erdogan’s A.K. party recently won the local elections again in Turkey[5]. This is no doubt a landmark success to the Palestinians as the continuing support of Erdogan and the A.K. party is very important to them. Unfortunately, those of us who reside in the U.K in particular and other Western countries know that it is almost impossible to get our elected politicians to criticise any of Israel’s law breaking actions never mind to hold it to account.

More than 60 lawyers participated in the conference and explained the current stage of the legal procedure in various languages through headphones and simultaneous translation. Because of the many jurisdictions involved with different legal systems the cases are being pursued individually in their own countries. Statements have also been sent to the International Criminal Court where it is hoped that this case will be taken on as a crime against humanity[6]. Some of what the lawyers related was legal and rather technical but the underlying message from all of their statements was that they will continue to search for avenues to bring Israel to justice and where one avenue is blocked another will be found. In other words no one is going to be deterred or discouraged by any set-backs encountered on the way, however long it takes.

Particularly interesting was the update on the legal case of a South African participant by lawyer Ziyad Patel. South Africa being a country with a dreadful past has meant that its post-Apartheid laws endeavour to make justice available for all and not only those of a particular race or colour. Ziyad was very inspiring when he made the following, moving statement:

“We must remember that the inalienable right to security, equality, freedom, dignity and justice are in themselves bestowed on us by God Almighty well before they had become secular institutionalised norms and standards under international law. We should, therefore, be unafraid to present this narrative in our efforts to achieve true justice—denied to so many.”

Saghir Husain, a British lawyer for CAGE, a charity mainly involved in the cases of detainees in Guantanamo Bay, spoke of how Britain is not only a close ally of Israel but was one of the countries involved in its establishment. In such a political climate it is therefore more difficult to punish the illegal actions of a state such as Israel, despite Israel being well known for its illegal actions. Saghir argued that one of the reasons for this Israeli impunity is the fact that judges might be concerned about their own career aspirations.

We also listened to talks by some of the leaders of the various groups that made up the Freedom Flotilla. Greta Berlin, leader of the Free Gaza movement told us never to lose hope and that small actions taken by people can have amazing results, giving the example of how aid boats reached Gaza in the past against all the odds. In fact the Free Gaza boat that sailed to Palestine in 2008 was the first ship to enter Gaza port since Israel instigated the 1967 war. The account of this historical journey and event is available to read in the book “Freedom Sailors[7].”  Greta also talked about the project ‘Gaza’s Ark’, a fishing boat that will sail out of Gaza in the near future with representatives from the international community and loaded with Gazan produce. Gaza’s inability to trade its goods with the outside world is a direct consequence of the siege which seeks to inflict collective punishment and misery on its inhabitants.

The above listed incidents have in fact been inflicted on the Palestinians for the sole reason that they not Jewish and because Israel wants as much Palestinian land as possible for its establishment of a “Jewish state” with as few Palestinians on it as possible. The fact of this injustice is that it is a clear attempt at ethnic cleansing and an illegal land grab against Palestinian Arabs who have for centuries lived in Palestine, but who are perceived as an obstacle to Israeli expansionism. Maintaining a racial Jewish majority seems to be something that the International community lacks any political will to address. The hands of our political leaders seem tied by the donations and pressures brought to bear by the pro-Israel lobby groups. This means that the responsibility of both ending Israeli impunity and bringing about justice for the Palestinian people lies on the shoulders of the people from every country in the world through their moral conscience.

Spending a few days in the company of people who really do care about human rights and are prepared to give of their own time and effort in the hope of improving the lives of those who are suffering was very uplifting and inspiring. So long as we have great organisations like I.H.H. and others who are present to give us direction and leadership then we will always come away from such gatherings newly motivated and believing that we must continue our struggle no matter how long it takes.

A report published by an Israeli think-tank[8] stated that one of the main concerns that Israel has is surrounding the growing solidarity movement between leftists, Muslims, Christians, Jews, atheists and others in uniting upon a common cause and participating together on action. Israel’s objective for the future is to cause division amongst these groups. Nearly four years after the flotilla, Israel still fails in its mission to divide and conquer. There are indeed differences between activists over the issue of Syria but in struggling to bring an end to Israeli impunity and to achieve justice and dignity for the Palestinian people there is total solidarity.

We will never forget our martyrs and it is indeed humbling to meet their mothers and widows, families and orphans who endure their situation with amazing dignity and steadfastness. Some of the martyrs’ family members spoke at the conference and outside the court where a large rally in support of the victims took place.

At the court hearing, many Turkish victims were able to give their witness statements before the panel of legal professionals. The aim of issuing arrest warrants against the four named Israelis however, was not achieved at that sitting since the judge needed to attend to the local elections.

Last Friday morning a press conference was held at the head quarters of I.H.H. where the media were brought up to date with the legal proceedings. The next court hearing is due to take place in Istanbul at around the end of May, which will coincide with the fourth anniversary of the Freedom Flotilla. Whether or not we believe that International law will provide a solution to the occupation of Palestine, all those concerned with achieving a better situation for the Palestinian people are working on many different levels and in many different ways to end Israeli impunity.

I really hope that, God Willing, I can attend and meet up with my flotilla family again.