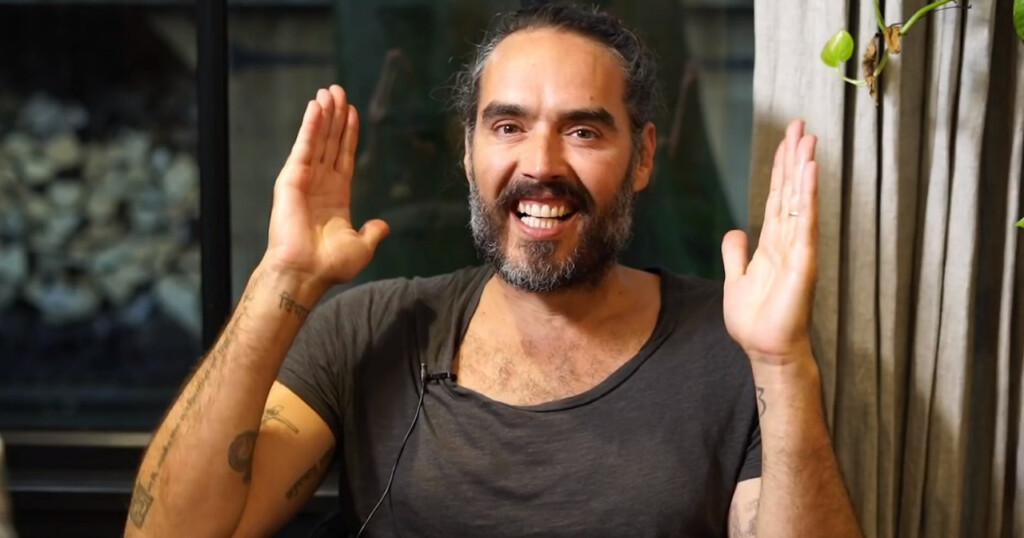 Balancing on the hallowed heights of celebrity probably means that you’re unphased by perfect strangers having strong opinions about whatever you put on the public stage. It’s a bit weird attempting to communicate with you this way, but such are the times, so I will go along with it.

This is what I would really like for you to read: a few thoughts from a Muslim woman who has a very rough handle on ‘Brand Russell Brand’ and its evolution over the years. Although I was young back then, I do remember your previous decades of hedonism, leather trousers, and addictions. Since then, your older, mellowed, and thoughtful offerings on the meaning of life and existential realities is something I’ve dipped into every now and then. For the sake of candour, I’ve listened to your insights so many times and have found myself asking, “How is this guy not a Muslim yet?” It honestly baffles me at times.

This is because in much of your commentary – particularly when you discuss following a spiritual path – you have accessed many of the deeper concepts that underpin worship from an Islamic perspective. What’s interesting, though, is that you present these ruminations without any of the codified terminologies that exist in the Islamic worldview because… you’re not a Muslim, of course. Your last video on prayer had me doing a live internal translation of all the concepts you were talking about. These concepts exist as vast areas of study, practice, and discipline for Muslims. These include when you spoke of focusing intention, being present, actively expressing gratitude, cutting off ego and indulgence, reaching spiritual states by restriction of the material, and so on.

Islam addresses these primordial truths within human beings. These truths aren’t confined to a neat box called “Islam”; they have been understood by people from many faith traditions. In this way, it may not be particularly note-worthy – let alone surprising – that you can reach some of the realisations you discuss. The game-changer for Muslims, however, is our understanding of the Divine. This is what sets Islam apart. Islam is sometimes called a ‘fierce monotheism’ or ‘monotheism 3.0’ as it has superseded the great Abrahamic religious traditions of Christianity and Judaism as a ‘seal’ and ‘perfection’ of their messages.

As Muslims, we consider Islam a refining and realigning of the human understanding of the Divine. When the sole object worthy of worship shifted from being One God Who is free of any aesthetic appropriations of the human mind, the Qur’ān reaffirmed the incomparable and unadulterated nature of God. Left to our own devices, we’ve sought to make objects of worship of ourselves, our egos, our lifestyle choices, and our abstract aspirations. The ‘fierce monotheism’ of Islam that clawed back the Oneness of God from idolatry, ‘man-in-God and God-in-man’ constructions, and the deified religious clergy of yesterday, is the same monotheism that averts our gaze today away from our internalised idolatry and back to its rightful place: the Creator.

Let us talk about prayer for a minute. Your last video focused on what you felt when you incorporated prayer into your daily practice. It’s something in my daily practice too, and it’s something Muslims do, dare I say, religiously. No doubt, prayer is something universal that exists across all faith (and non-faith) traditions, taking on many different forms. There’s almost always an internal preparation coupled with an outward demonstration. Prayer is the time where the mind, heart, and intellect are synergised in humility and acceptance of the hand of the Divine over us. For this purpose, the prescribed form of prayer in Islam is the crème de la crème of worship experiences.

I’m not sure how much you know about it, but there are endless angles to the Islamic prayer, or salah as it’s known in Arabic. Although it is considered a ‘ritual’, it’s never supposed to be performed ritualistically. The salah is mandated at set points during the day (following the cyclical rhythm of the day and night) and is designed as a ‘pause and pull back’ when we become lost in the hustle and bustle of our lives.

This is why our prayers are five times a day and why, for a Muslim adult of sound mind, it is a mandatory tenet of faith. It’s the foundation on which all other spiritual practices (fasting, pilgrimage, alms-giving) rest, and it is ultimately the ‘qualifier’ for even attempting a spiritual path. Spirituality in that sense is about the discipline and commitment to a path, one that is often slow and painful. The inner peace, ‘feel-good’ vibes, and groundedness that stem from that may take root immediately or later, but they’re not the aim of the experience; they’re a happy side effect.

For lives that are now consumed with ever-insidious social media, dysfunctional public discourse, and a toxic political culture, all this noise and fluff is muted out by regularly engaging in prayer. The prayer begins with the prerequisite of a physical ablution, the washing of the self in preparation for the prayer. Ablution clears away the debris of noise that lingers, and mentally signals that a profound re-centring of the self is about to be attempted. The prayer is punctuated throughout the day in order to be a constant pull back- by the scruff of your collar- from the cliff edge of self-imposed ruin, back onto safe ground. After all, you are what you repeatedly do, and this also includes being connected to your purpose.

Then there’s actually standing for the prayer itself. First, we turn to face the Ka’bah in Mecca. The Ka’bah is considered the first house of monotheistic worship ever built by man. All Muslims, no matter the patch of rock they reside on, turn to one unified direction for prayer, like iron filings pulled by the overwhelming magnetic force of Divine truth.

The first thing we do when we stand for prayer? We raise both our hands to shoulder height in the international symbol of surrender. But we’re not civilians with a bit too much melanin facing a pistol-wielding cop. We stand as we are, unarmed and vulnerable, fully in the safety of our Lord. We declare the infamous “Allahu Akbar” – God is the Greatest. This is a statement of fact, and the benefit is only to ourselves in reaffirming it. God is, at this point especially, greater than the worldly distractions we have left behind.

The prostration follows next in the prayer. Again, this is something that many faith traditions have in their prayer rituals. However, the Islamic prayer climaxes in the prostration of the full body, with the forehead resting on the ground. This is considered the moment when a human is closest to one’s Lord. At this point, the head throws itself down in absolute surrender to its Lord. In this position, the heart, a vessel carrying spiritual realities, is elevated higher than the head, the crown of the intellect and ego.

The prayer works on many levels and on many stations; too many to be unpacked here. There are internal preconditions to prayer without which the external acts of prostration remain hollow. These preconditions include sincerity, humility, and presence of heart.

The prayer times follow the rhythms of nature, from daybreak to nightfall. Winter days means closer and more clustered prayers. Summer brings longer stretches between prayers and shorter nights as we rise for pre-dawn prayers earlier. The Islamic calendar, which marks the months of fasting and pilgrimage, is a lunar one. It follows the physical sighting of the celestial creature of the night sky and therefore ensures that we have an active and ongoing connection to one of the great signs of God’s Creative power. Worship, therefore, is always about being connected – both to the cycles that God has already ordained into motion in our physical world, and within the cycles of our day where we are mandated to return to God no matter what is happening around us. We re-centre and recalibrate ourselves by remembering our purpose, expressing gratitude, and renewing intention and sincerity in our actions. All of this has been covered in your short reflections.

As a Muslim woman, I have never thought about Islam as a religion. It is simply an open acknowledgement of an irresistible reality around us. It is about how, just as the observable and natural world around us is governed by rhythmic and beautiful Divine laws, our lives can harmonise with nature by surrendering to a framework designed to satiate the inner spiritual yearning and align the outer practical conduct.

It makes sense then, that Islam is also distinct in that the label itself rests on a verb: ‘to surrender’. The universe and everything it contains is already in this unified surrender, but one reaches the best version of oneself when actively choosing this liberating surrender as a way of life. Though our faith tradition has its significant Prophets and Messengers, our religion is not defined on that singularity like the tri Godhead of Jesus Christ in Christianity or the Buddha in Buddhism. Though there were tribes that received and continued the message of monotheism, our religion is not defined by territory or tribe like the Kingdom of Judah in Judaism. Though we have a geographic reality of where the last of God’s Messengers originated, we are not defined by physical locations like the River Indus from which Hinduism is derived.

Islam is a verb, and it will always be a verb. It describes the one who surrenders and submits the whole of their self, their ego, their inclinations, and their very selves to live according to a Divine framework that unifies and brings purpose and wholeness to our holistic needs as humans.

I’m not sure how many Muslims you’re around, Russell, or whether they’re the type to want to delve into this stuff, but there’s plenty out there who would. I really am grateful at the happy irony that you are using your platform to bring these ideas to attention. I believe there are many more ‘seekers’ out there than we assume, maybe even those who have these spiritual niggles but haven’t been able to articulate it to themselves or make sense of them yet. Though I hate to fall prey to stereotypes, I can’t end this letter without openly saying that I so intensely see the potential of a grounded, flourishing, and I daresay, electrifying Muslim in you.

“The beginning of Islam is wonder at the world; its end is to be the wonder of the world.” – Abdul Hakim Murad

The following is a list of some great books to have a deeper dive in:

Remembering God, King of the Castle, Islam & the Destiny of Man, Reflections – all written by Hassan le Gai Eaton

Inner Dimensions of the Prayer by Ibn Qayyim al-Jawziyyah