The justice advocacy group, CAGE, marks the 21st anniversary of the worst massacres in modern US history: the Qala-i-Jangi and Dasht-i-Leili mass murders of November and December 2001
Campaigns 27/11/2022No Comments5 Mins ReadBy Muhammad Rabbani 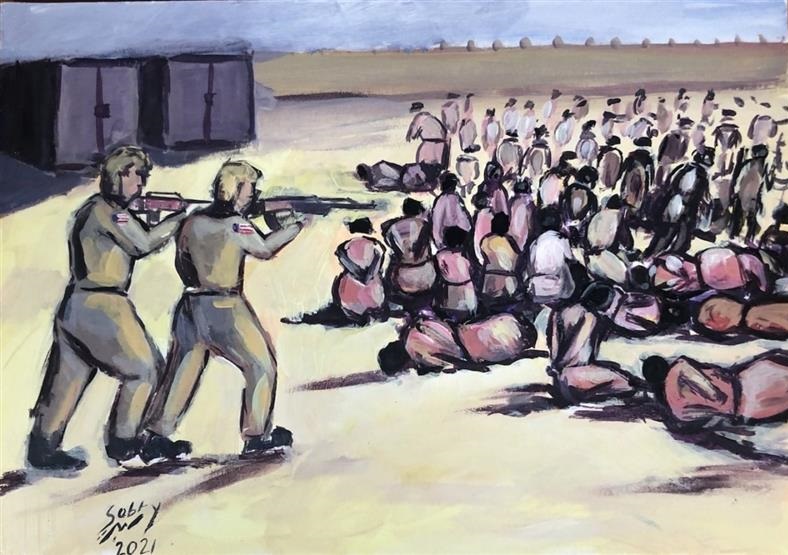 If you were asked to name the worst of America’s war crimes in modern history, chances are that the mass killings in a 19th century fort and Afghan desert wouldn’t pass your lips. In fact, the words ‘Qala-i-Jangi’ and ‘Dasht-i-Leili’ hardly feature in our political lexicon at all. The foreignness of the names is only matched by the suppression and silencing of what really took place at those two sites.

It is time the world is made aware of what the reality of US war crimes really looks like, in all the brutal, harrowing, and flinching detail that exists. The killing of captured prisoners must not only be memorialised, known, and unpacked, but survivors must also be given the right to tell their story and accountability must be sought for one of the biggest cover-ups in the US ‘War on Terror’.

So where does the story begin? Following the US invasion of Afghanistan post 9/11, a contingent of 8,000 Taliban soldiers surrendered to US and allied Afghan forces in Kunduz, North Afghanistan. Under the supervision of infamous war criminal General Rashid Dostum, these prisoners were promised safe passage to Herat via Mazar-e-Sharif. The US and her allies never intended to honour this promise, however, and instead prisoners were taken to a military fort named Qala-i-Jangi and shipped (in literal shipping containers) to the Sheberghan Prison in the desolate Afghan desert. [1]

Those sent in shipping containers were asphyxiated, as the steel containers had no oxygen, playing host to horrific scenes of dead and dying men held in metal cuboids. Other prisoners were spared the fate of a slow and panicked death, and were instead rounded up to be shot and then buried in mass graves along the Dasht-i-Leili desert, en route to the prison.

“Numbers can never convey the inhumanity of what took place in these twin massacres; however, they can provide perspective. To that end, only 3,000 of the original 8,000 surrendered prisoners survived.” [3]

Unsurprisingly, both the mass killings took place with the full knowledge of US forces and with the alleged complicity of British forces, also. The accountability from both has been nil.

Today, we speak of these massacres in the past tense as 21 years have now passed. In that time, comprehensive cover-ups have taken place where both President Bush Jnr. and President Obama ordered investigations, the findings of which have never been released.

In the face of deafening silence, the organisation I lead, CAGE, launched an independent investigation – to not only document this war crime, but also – to hold the perpetrators to account and seek justice on behalf of all those affected by the massacres, living and dead.

Part of this investigation saw me travel to Kabul, Logar, and Kandahar over three separate visits to Afghanistan in the last year. I was honoured to meet with survivors of imprisonment and torture, including those held in notorious ‘black sites’ and the infamous Bagram airbase. Through our interactions, we have been able to begin the first steps of uncovering the truth of the Twin Massacres. Work is already underway to survey the locations and identify the names of survivors and those who were killed. This is a slow and difficult process, but one that is crucial to building an accurate history of the events.

To raise awareness for the public, we hosted the first memorial event of the Twin Massacres in November 2021, and intend to continue this annually.

Here, survivors told their story in harrowing first-person accounts, speaking not only of the horrors of those days, but the devastating and wide-ranging impact to their lives since. In a TV interview back in 2013, Caitlin Hayden, Obama’s White House spokeswoman, responded to questions that the massacres “had not been properly investigated”, by announcing that there was “no plan to release anything”. [4] There is clearly a lot that the US wishes to cover up. This is why we demand the reopening and release of documentation of these official investigations.

“Civil society organisations must increase pressure on relevant bodies to investigate and seek justice for these war crimes.”

By coming together to learn about the Twin Massacres, we can collectively raise awareness and call for accountability for these crimes against humanity. The massacres of Qala-i-Jangi and Dasht-i-Leili took place 21 years ago now, yet the fight for justice continues on tirelessly.

[2] Imputing war crimes in the war on terrorism: the U.S., Northern Alliance, and ‘container crimes’ by Ahmed S. Younis, https://scholarlycommons.law.wlu.edu/crsj/vol9/iss1/9/

Muhammad Rabbani is the Managing Director of CAGE. A committed community organiser, Muhammad previously spent several years bettering his area by piloting pioneering gang mediation services, and youth programmes in one of Britain’s poorest boroughs. As the Managing Director of CAGE, he has been instrumental in bringing to light torture cases and state abuses, seeking justice and accountability for victims. His name rose to prominence as a privacy advocate when he refused to hand over his password to British police in order to protect the testimony of a torture survivor. He became the figurehead of a popular campaign supported by numerous pro-privacy organisations and ordinary citizens, demanding the roll-back of draconian police powers. He is a regular guest on international forums and media, as well as an educator at the grassroot-level.