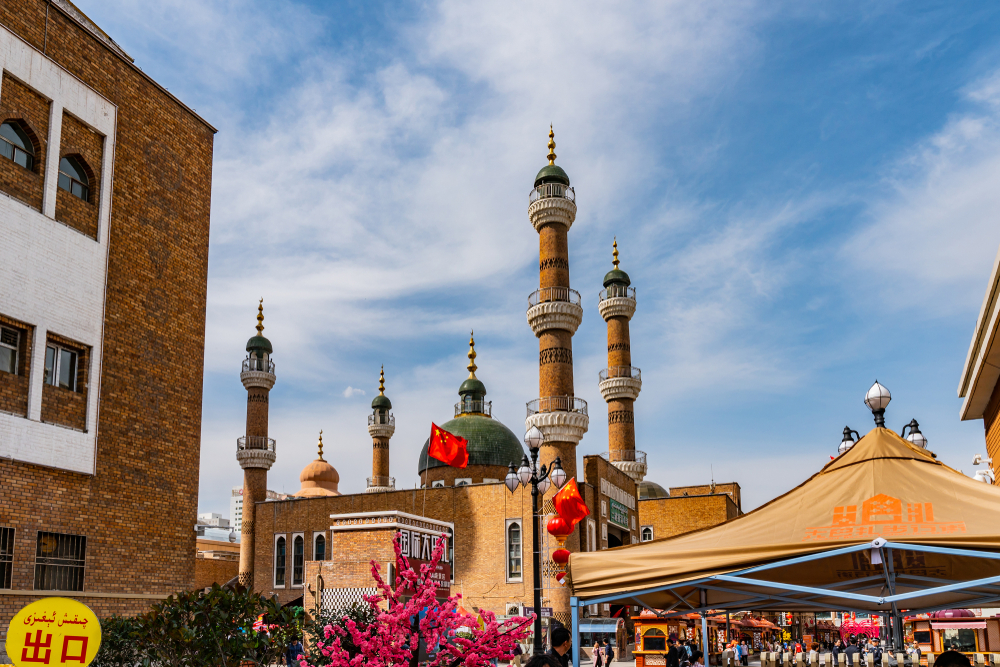 The International Grand Bazaar in Ürümqi, which is the world's largest by scale. The city has been suffering from an extreme lockdown since August. Photograph credit: AlexelA / shutterstock.com

According to sources in the area, we understand that a devastating fire in the East Turkestani city of Ürümqi has caused the deaths of dozens of Uyghur families. And in a particularly harrowing detail, it can be revealed that many were tragically burnt alive following China’s violent and draconian zero-Covid policy, which has led to many Uyghurs being trapped in their homes and in inhumane holding facilities, with millions more in a perpetual state of starvation, fear, and desperation. [1]

In recent days, mass protests have broken out in Chinese-occupied East Turkestan, and in China, following the burning of an apartment building in Ürümqi on Thursday, 24 November. Chinese state media have attempted to report the fires as having killed 10 Uyghurs. However, these reports trivialise and most likely under-report the true extent of the casualties. [2] Indeed, on-the-ground reporting suggests that at least 44 people have died, with further hundreds facing life-threatening injuries.

Here is the part of the building that caught fire and killed 44 people in Urumchi on Nov 24: pic.twitter.com/DpXyKiwDs9

Over 100 days in extreme lockdown

It has been over one-hundred days since the implementation of the repressive zero-Covid policy and its associated lockdown in occupied East Turkestan. Ürümqi finds itself among numerous other cities that have been suffering from one of the longest lockdowns in history, under China’s authoritarian rule.

In regards to the appalling oppressed state of the Uyghur people, China’s tight control and censorship over the region has meant that the rest of the world was only able to find out about their situation via a few brave individuals who risked their own safety while exposing the country’s brutal and genocidal practices. Social media platforms including Douyin – which is the Chinese name and variant of TikTok – have been an invaluable tool in this endeavour.

Islam21c understands that the oppressive coronavirus lockdown began on 8 August in multiple cities throughout East Turkestan.

Uyghurs are calling it a “starvation genocide”

The policy has thus far prevented millions of people from leaving their homes, accessing food supplies, medical care, and other bare necessities. Distressing video footage available online has shown that many Uyghurs have died of starvation, due to being unable to leave their homes to access food.

Testimony from exiled Uyghurs who have dared to receive information from the tightly controlled region reveals the true nature of the so-called “quarantine centres” that China claims as being there to protect people and contain the virus.

In reality, people are being involuntarily forced into these “centres” – which by all accounts, are akin to concentration camps. In East Turkestan, people are now fearing for the harsh winters that lay ahead, where the lack of heat and basic facilities could lead to people not only starving, but also freezing to death.

Have the people of China finally broken their silence?

For decades, Chinese citizens have refrained from dissent, due to fears that the Chinese Communist Party (CCP) will crack down on protesters and those who defy the state. However, surprisingly, recent protests have erupted in Chinese cities including the global financial hub Shanghai, the capital city of Beijing, as well as other large cities, Chengdu, Wuhan, and Guangzhou.

The root cause of these demonstrations appears to be the Ürümqi fire on 24 November. This, then, was the final straw for Chinese citizens who have themselves also been subjected to harsh COVID-19 lockdown strategies for nearly three years. Such is the strength of the undercurrent behind the ongoing demonstrations, they have been described as the largest seen since the infamous Tiananmen Square Protests and subsequent massacre of April – June 1989.

In Shanghai, during a rare show of dissent, large groups of protesters gathered on Wulumuqi Road – named after Ürümqi in East Turkestan – to call for the “removal of the Communist party and Xi”. [1] Moreover, students at Beijing’s elite Tsinghua University have been using blank pieces of paper as a symbol of their censorship during protests against the COVID-19 policies.

Interestingly, the Guardian suggests that students have been using plain sheets of paper, perhaps in a subtle reference to the Ürümqi fire of last week, as white is a colour associated with funerals in Chinese culture. [3]

Citing online videos, the Guardian also quotes a protester as having shouted out, “Democracy and rule of law! Freedom of expression!”, while others have chanted the slogan:

“This is not normal life, we’ve had enough. Our lives were not like this before.” [1]

Students in #Tsinghua University, #Beijing are protesting. It started from a girl raising a blank white paper; then four girls joined; then hundreds of youths join. Please support and stand in solidarity with them for freedom. (Credit: @ZhouFengSuo) pic.twitter.com/7A2TiI6i0Z

While it is praiseworthy that Chinese citizens – both within and outside of China – are finally speaking up against the brutal CCP regime, the decades of silence against the government’s genocidal policies in occupied East Turkestan cannot be forgotten.

Unlike the protests in major cities within China, the protests by Uyghurs in East Turkestan have been met with police brutality and we have seen harrowing videos of Uyghur protesters being shot on sight. The CCP continues to treat Uyghur Muslims like animals, unworthy of basic human rights and a testing ground for their persecution, indoctrination, and ethno-cultural genocidal policies.

It is time that Chinese citizens and the rest of the world took a stand against the oppressive rule of Xi Jinping and the Chinese Communist Party. This horrendous fire, lockdown, Uyghur abuse, and police brutality is just another reminder of the ongoing persecution of Muslims in East Turkestan.

Let us not become desensitised; we must continue to stand against the brutal CCP regime.

For more information, check out this video:

What to the Fires in Urumchi, East Turkistan, represent? https://t.co/fLuUiVFdiO