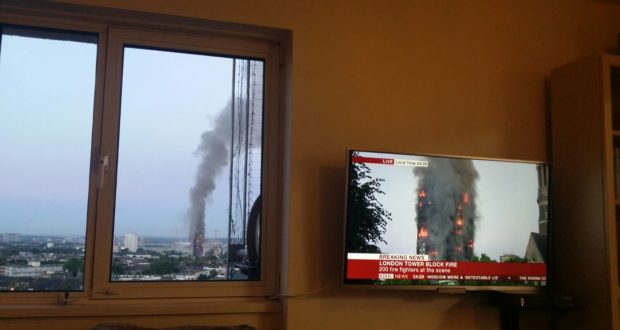 A terrible fire raged in London last night, killing several people and leaving over 50 in hospital. The fire that engulfed so many is believed to have started on the fourth floor of the Grenfell Tower in north Kensington, spreading at such an alarming rate that the 45 fire engines and 200 fire-fighters could do little more than watch the disaster before them. During this difficult time we offer our deepest condolences to all those affected by the fire. We pray Allah grants Jannah to all our brothers and sisters who passed away, gives strength and patience to those who have been injured and aids those who have been displaced.

Eyewitness accounts came in of people trapped in the building, calling for help but being out of reach. Reports have stated that,

“A two-year £10m refurbishment – which was part of a wider transformation of the estate – was completed last year. Work included new exterior cladding and a communal heating system.

The tower is managed by the Kensington and Chelsea Tenant Management Organisation (KCTMO) on behalf of the council.”[1]

“our attempts to highlight the seriousness of this event were covered up by the KCTMO with the help of the RBKC Scrutiny Committee who refused to investigate the legitimate concerns of tenants and leaseholders.”[2]

In October 2015 a fire also occurred in another KCTMO property. KCTMO have yet to release a statement on the matter.

Last night’s incident was horrifying; to picture women trying to save their babies from the blaze and people falling out of windows of a 24 storey building in the hopes of a shot at safety is haunting for us all. One wonders at the guilt that must plague those responsible for such ineptitude that may have led to this; in particular such an avoidable tragedy.

“If a mule stumbles near the Euphrates River, I fear being questioned by Allāh as to why I had not paved the road for it.”

Perhaps if those in power possessed this level of fear and accountability over those for whose care they were responsible things may have panned out differently.

The local community—which is made up of predominantly ethnic minorities including scores of Muslim families—however has shown strength and resilience in coming together to help those affected, mā shā Allāh. The Independent reported that the many Muslim families in the building and surrounding area awake at the time due to fasting were alerting residents in the 24-story building of the fire by knocking on their doors, since residents say that there were no internal fire alarms to alert people of the fire rapidly spreading.[3]

A variety of charities have been on the forefront in helping the people affected by the fires throughout the day, with the local Al Manar Mosque sheltering victims and their families. Also on the ground were National Zakat Foundation, Suffa Global, Islamic Relief and Muslim Aid, from providing water to distributing blankets from other local charities such as Age Concern. Mosques around the city have also been making announcements, prayers and collecting supplies to help the victims in what is perhaps an unprecedented example of solidarity and support across the capital.

Dr Shameela, who many of us know personally, has set this page up to raise funds for the London Fire survivors. Please dig deep and don’t let the day go without

2017-06-14
+Editor
Previous: Sajdah: The Peak of Subservience
Next: Muslims charities have been aiding since 3am