On the Mimbar: Reviving Al-Aqsa in our Hearts 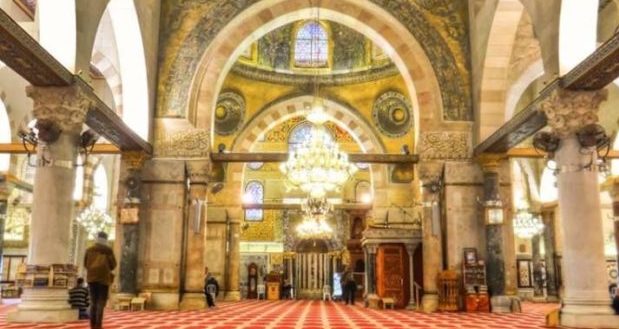 In light of the recent developments in Palestine with the US recognising Jerusalem as the capital of the illegal state of “Israel” we gather today to fulfil the obligation of Jumu’ah. Wherever you stand today to perform your Jumuʿah, despite having no particular significance, not one of us would accept or tolerate that we are prevented from this gathering. And yet, Masjid Al-Aqsa is under threat once more of having its doors closed to Muslims forever as the Zionist usurpers vie to take Jerusalem as their capital and overthrow the true – Muslim – keepers of Masjid Al-Aqsa.

This year, due to the Occupation forces illegal take over, Allāh was not worshipped inside the second Masjid built for the worship of Allāh on earth and the Adhān was not raised for two consecutive days. Abī Thar narrates:

Al Masjid al Aqsa in Jerusalem was the first Qibla the Prophet (sall Allāhu ʿalayhi wa sallam) and companions directed their Salāh towards for 10 years and 17 months before it was then changed to the Kaʿba.

It is the lonely brother of the lively and thriving two greatest Masājid; al Masjid al Harām in Makkah and al Masjid an Nabawi in Madīnah. It lies under the gates of heaven, from where the Prophet (sall Allāhu ʿalayhi wa sallam) ascended to the highest heavens on the miraculous Night Journey,

“Glory be to Him who took His slave on a journey by night from al Masjid al Harām to al Masjid al Aqsa, whose surroundings We have blessed, in order to show him some of Our Signs. He is the All-Hearing, the All-Seeing.”[2]

A verse that gathers mention of the three Masājid in the most eloquent and awe-inspiring way, al Masjid al Harām mentioned explicitly, then al Aqsa explicitly as a noun, but also meaning the ‘furthest’ Masjid, which is an adjective. So it is further than the closer Masjid of the Prophet (sall Allāhu ʿalayhi wa sallam). They are inseparable and the love of the three is undividable.

“Do not undertake a journey to visit any Masjid, but three: this Masjid of mine, al Masjid al Harām and al Masjid al Aqsa.”[3]

A verse that sits in one of the very first chapters to be revealed to the Prophet (sall Allāhu ʿalayhi wa sallam). ‘Al ‘Itaaq al ‘Uwal, according to ʿAbdullāh b. Masʿūd. It is also well known that the first chapters of the Qur’ān sought to establish the very core of Islām; the ʿAqīdah, the Pillars of Īmān, the Tawḥīd of Allāh. Therefore, Al Masjid al Aqsa is intrinsic to our ʿAqīdah and is part and parcel of our identity as Muslims.

It is in al Aqsa’s courtyard that 124,000 Prophets and Messengers miraculously gathered for Salāh, led by none other than Muḥammad (sall Allāhu ʿalayhi wa sallam). In fact, Ibn ʿAbbās mentions:

“Baitul Maqdis was built by the Prophets, inhabited by the Prophets. And there is not the area of a single hand span except that a Prophet prayed in or an angel stood on.”[4]

“We delivered both him and Lūt to the land which We had blessed for all beings.”[5]

Al Aqsa is from where the second blowing of the horn will take place. One which will mark the beginning of the Resurrection; one which will call people out of their graves.

“And listen on the Day when the caller will call from a near place. The Day when they will hear a scream in truth: that will be the Day of emergence.”[6]

This “near place” where the horn will be blown is on top of the rock in Jerusalem – the capital of Palestine; the capital the US deigns to hand to the Zionist state.

It is to where no Muslim enters, desiring nothing but Salāh, except that he returns sinless, like the day his mother bore him.[7] It is about which the Prophet (sall Allāhu ʿalayhi wa sallam) said:

“One prayer in my mosque is better than four prayers offered there (in Bayt al Maqdis), and what a good place of prayer it is. Soon there will come a time when, if a man has a piece of land the size of a horse’s rope from which he can see Bayt al Maqdis, that will be better for him than the whole world and everything in it.”[8]

It is where Īmān and the greatest slaves of Allāh will be at the End of Times, when most others will lose track and focus. So again, this time just 5 months ago, no Jumu’ah Salāh was held at al Masjid al Aqsa, and just this week its home, Jerusalem, has been recognised as the capital of the Zionist entity. Wallāhul mustaʿān.

For the first time in history, the brutal Zionist occupation have discussed the status of al Aqsa, plans on the destruction of Al-Aqsa are moving forward with support from politicians; and now, what is worse, is that the US seeks to officialise the transfer of the Palestinian capital to the murdering, criminal Zionist state.

But as Muslims, we never despair. For we have experienced much worse when al Aqsa was closed following the first crusades becoming a stable for animals. No Salāh was performed and no Adhān was raised for nearly a century. Then the Ummah repented, returned to Īmān, united behind Salāhudīn and Allāh returned al-Aqsa and the land of Palestine back to its owners.

But Salāhudīn did not emerge from a vacuum, rather from generations and generations of Muslims who had embodied love for al-Aqsa and the blessed land upon which it stands. A Kurd who was taught by his parents and teachers to look beyond his nationality and see al-Aqsa as an Islamic cause. Have we taught ourselves about al-Aqsa and its virtues, and are we teaching our children about it?

Ibn Kathīr, a man who embodied the characteristics of al-Aqsa’s liberator, says regarding Salāhudīn:

“May Allāh’s mercy be on him, he was generous, loved, cheerful, never fed up of doing good, extremely patient and perseverant in doing good and in worship, forbearing, overlooking of people’s mistakes, a person of Taqwa, pure-hearted, loyal, pardoning, not short tempered. He never turned away an asker, or disregarded a speaker, he was righteous and very charitable.”[9]

He was a leader who did not passively wait for others to take action, but actively adopted the cause as his own and did what he could. Let us also be victors of al-Aqsa through political activism, speaking, writing, campaigning, sending messages of support to the guardians of al-Aqsa, visiting them and making duʿā’ for them.

Each and every member of this great Ummah is a pillar of al-Masjid al-Aqsa and a defender of Palestine, let us focus on our duty, rather than the treachery of some and the failings of others. May Allāh allow us to be amongst those who liberate this Masjid and raise the word of Allāh in Palestine.

Also Read: Al-Quds (Jerusalem) is an Islamic land and no one can change that reality

[1] Bukhārī on the authority of Abū Dhar

[3] Muslim on the authority of Abū Hurairah

[8] Mu’jam al Tabarani on the authority of Abī Thar