What Can YOU Do for Tuqa? 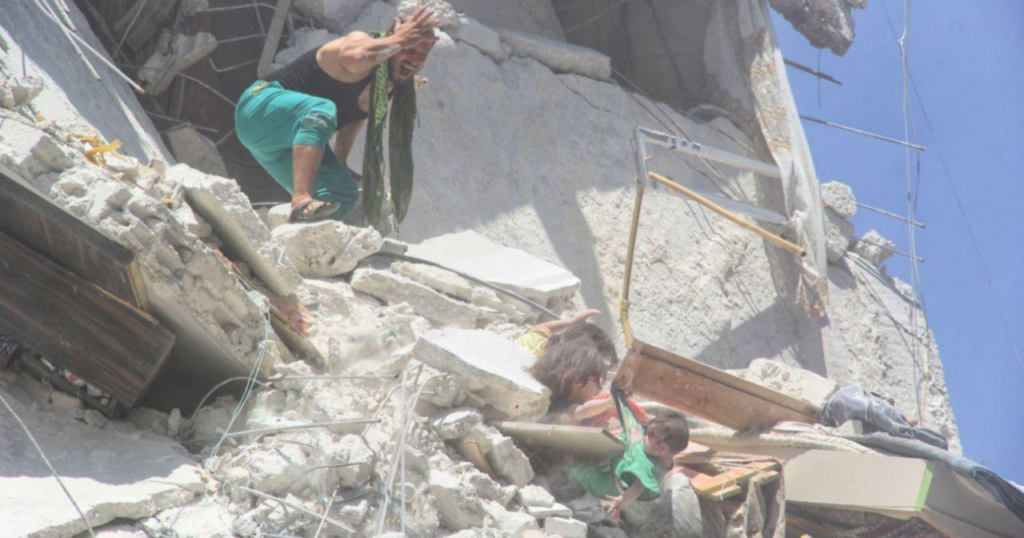 There are a few images in modern history which speak to our collective human shame. Of them is the photograph of the ‘napalm girl’ from the Vietnam war, or the mushroom cloud over Hiroshima, or images of emaciated men held in concentration camps during the Balkan war. Syria, perhaps because of the rise of citizen journalism, has scorched our memories with far too many distressing images than will allow any conscience to remain silent.

Last week, yet another striking image was shared on social media. In a single photograph, so many narratives and countless human emotions were spoken.

We see the distraught father, head in his hands, helpless. Any father cannot help but feel his anguish. To recall the first moment your child was held by you, where you promised to protect and cherish them.

Moving down the photo we can just about make out a small child, buried under the rubble clutching another, even smaller child. As we all now know, the small child under the rubble was Riham, just five years old, whilst her younger sister whom she had saved, was Tuqa, just seven months. [1] Riham would later die of her injuries, her final act being saving her infant sister’s life. Tuqa remains in intensive care.

What the image does not show is what has become a sadly familiar story in Syria: the missing mothers. Riham and Tuqa’s mother is in the picture, buried somewhere under the rubble. Her life taken by yet another Russian bomb.

What the image does not tell you is the emotional impact it must have on a community which has to persistently remove lifeless child corpses from under the rubble.

What the image also does not show are the so-called ‘terrorists’ that Putin and his gang claim to be targeting. Or were the ‘terrorists’ the 10 members of a single family – including three children – killed in Khan-Sheikun by Russian airstrikes?

On a near daily basis, Russian ordnance has fallen from the skies killing indiscriminately. The ground now soaks with the blood of children as scattered limbs of their mothers are gathered by their mourning fathers.

Or are the ‘terrorists’ the countless number of children whose limbs have amputated following Russian airstrikes? History will recall Syria as the war in which the targeting of children became acceptable.

These are the terrorists Putin and Assad are killing: children not even old enough to say their own names.

“And when the girl who was buried alive is asked. For what sin she was killed?” [2]

At first, reading these āyāt may appear odd. After all, it is normative practice for the alleged criminal to be questioned over his crime. And this is seen today where dictators are given air time to propagate untruths to defend their actions. Putin and Assad are past masters at this. The latter and his wife even being interviewed in 2015 by the BBC, where he was addressed as “President”. Many commentators saw this as a turning point in the crisis for the regime’s rehabilitation onto the international stage.

Returning to the āyāt; rather than giving the criminal an opportunity to make excuse, he is given no voice. It is as if to say that there can be no justification for this crime. Instead, the oppressed – the one who had been violated – her voice is raised.

Some commentators have suggested the increased intensity of bombing in civilian areas is due to Assad’s failure to make any headway against rebel forces on the battlefield. It appears the Assad regime is lashing out at unarmed civilians because they are being frustrated by the fierce resistance of rebel forces.

Sadly, many Muslims have now resigned themselves to Syria, with a ‘what can we do?’ attitude. However, there is so much we can do here in the west for our families in Syria, but we just need to show a fraction of their fortitude and reliance on Allāh (subḥānahu wa taʿālā).

One action is to call out Russia for its crimes. Putin may not much care for his international reputation, but he does care deeply about the financial bottom line. Gazprom is an energy giant which is majority owned by the Russian Government and had an annual revenue of 188 billion dollars in 2018. [3] Gazprom is also a key sponsor for the UEFA Champions League, as shown exclusively in the UK by BT Sport. Does a brand such as BT want to be associated with the murder of children in Syria? Let us ask them. In fact, let us also ask English clubs (Liverpool FC, Manchester City FC, Chelsea FC, and Tottenham FC) who will play in the Champion’s League if they are comfortable being associated with Gazprom?

Gazprom is the UK’s leading business gas supplier. It boasts clients such as McDonald’s and Siemens. Peter Schroeder, Senior Energy Consultant at McDonald’s UK, is quoted as saying:

“The fact that every single franchise in Great Britain has chosen to take this contract up shows the faith they have both in McDonald’s to select the right supplier and in Gazprom Energy to deliver a good service.” [4]

We need to ask McDonalds, which purports itself to be a family friendly eatery, if they are comfortable with Gazprom knowing what its majority shareholder is doing to children in Syria? If there is no response, then we can send a message by withholding our custom.

Raising awareness about Gazprom and these businesses is easy. We can simply tweet or post the striking image of Riham and her Tuqa on their various social media sites asking if Gazprom profits bought the bombs that destroyed their lives? It is the least we can do to honour the life of our daughter, Riham.

May Allāh (subḥānahu wa taʿālā) ease the suffering for the people of Syria and end the brutal Assad regime. Āmīn.