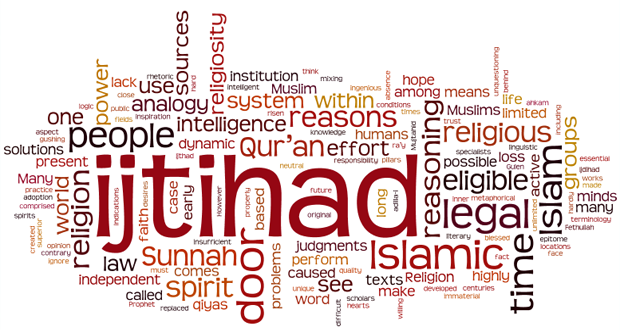 In a previous article I highlighted that the existence of a difference of opinion is not itself an evidence for a position that one holds. I also pointed out that not every difference of opinion is well-founded and therefore legitimate. This subject matter is by its nature academic and I will explore more of its elementary points since it forms a focal point of our discussion. Such fundamental notions and methods that connect us to the Shari’ah and define our convictions and practice must be read and presented according to the understanding of the overwhelming majority of scholars.

Lexically, ijtihad means to exert maximum effort to carry a heavy object. This meaning is heavily represented in its technical definition: to exert maximum effort to arrive to a conclusion in a matter related to the Shari’ah. Competent scholars carry out ijtihad only in the absence of no clear conclusion, either due to the lack of very clear textual evidence or no definite interpretation of a text.1 Concerning the latter, both the lexical aspect and interpretation of early scholars comprising the Companions and the immediate generations succeeding them, until the time of the four imams are the two prime factors in evaluating whether the text is open to a different interpretation or not. If the early scholars unanimously agree on an interpretation, it is not permissible to go against this as it would contravene well-established texts forbidding this, as well as common sense.

For us to adopt a new interpretation would mean that all of the aforementioned scholars did not understand the religion and strayed from the truth. This implication further suggests that major Islamic fundamentals pertaining to tawhid, prayer, fasting etc. may be altered or obliterated as we may ‘discover’ that the true interpretation is not what scholars throughout history unanimously used to believe and practice! Is it conceivable that Allah commands us in the Qur’an to refer to them while He knows that all of them will jointly stray from the truth? Allah says in the Qur’an, ‘And whoever contradicts and opposes the Messenger after the right path has been shown clearly to him, and follows a path other than the believers’, We shall keep him in the path he has chosen, and burn him in Hell – what an evil destination.’2 This verse clearly proves that going against the path of the believers is a condemned practice. The Prophet, may Allah praise and send peace and blessings upon him, also said, ‘Allah safeguarded this nation [ummah] from gathering together upon falsehood.’3 We should also remind ourselves of the numerous evidences that command Muslims to side with the greater body of Muslims, not only physically but morally, ideologically and spiritually. This serves as the philosophical meaning and background to legal consensus [ijma’].

Likewise, if the overwhelming majority of scholars agree on something then it is also very unlikely for them to err. As such, many scholars in effect equate the case of an overwhelming majority with a total consensus. Following consensus or an overwhelming majority is the surest safeguard against distortion, innovation or novel interpretations that may lead one astray from the straight path of Allah. The emphasis given by Allah to remain with the body of Muslims [jama’ah] is so great that some scholars regard this to be a fundamental tenet within Islam.

Consensus vs. textual evidence
To avoid any misconception it is important to explain the relationship of scriptural text to consensus. The ruling of any issue agreed by consensus or an overwhelming majority will without fail be supported by textual evidence. The absence of a corroborative text is not only impossible but has never occurred. It is true that conclusions may be derived through a complex process but this should not give the impression that such an agreement is not backed by textual proof. Therefore, to rely on consensus or the overwhelming majority in effect means to rely on textual proof as well as consensus as a stand-alone proof. Unlike consensus, a text may be subject to different interpretations so quoting textual evidence may not be sufficient to convince or remove possible confusion. Furthermore, one who challenges your opinion may counter your textual proof by another one or may even counter your interpretation of the text by his. Consensus or an overwhelming majority cannot be countered by a second consensus or another interpretation. This explains the trend some jurists take by citing consensus before textual evidence or preferring consensus to scriptural text. Scholars and judges nevertheless often cite textual proofs in their verdicts and sermons to make sure the masses remain attached to the sacred text.

Ijtihad is only possible when the difference on an issue is more evident, in that the opinions are voiced and argued by a considerable number of scholars. This means that scholars of later generations can research and prefer an existing opinion not invent a new one. Failure to adhere to this may lead to chaos and again implies that the truth was completely missing to the earlier generations. This of course causes no difficulty for a new matter that was not existent in the past; scholars will perform ijtihad and either agree on a ruling or differ leading to valid interpretations and positions.

How to deal with matters of Ijtihad
We often find ourselves perplexed when faced with an issue which seems to be contentious. Although the issue may seem confusing to many, the approach to a solution is straightforward; if one contracts an illness and is prescribed a course of medicine by a doctor that is deemed harmful by another doctor, would one remain insistent upon consuming that specific medicine and simply dismiss the matter as being one of disagreement or adopt what seems to be the easiest option? For sure, a person would exert his utmost in research and consultation before deciding to take the medicine or not. {quotes}We deem health and financial issues to be of paramount importance, but unfortunately this is not replicated in our religious affairs, especially when they can be more perilous as anything that might affect an individual’s faith and religion could constitute a measure towards Hell.{/quotes}

It is stated in the Qur’an, ‘And they (i.e., the Jews) say, “The Fire shall not touch us but for a few numbered days.” Say (O Muhammad) to them, “Have you taken a covenant from Allah, for Allah will not break His Covenant? Or is it that you say of Allah what you know not?”.’4 A simple study of this verse informs us that it is incorrect to assume that pursuing a ‘deceptively’ easy route in this life is acceptable by attempting to provide the excuse that Allah is the Oft-Forgiving. Such assumptions violate Islamic principles in that they attempt to disparage the notion of Allah testing mankind.

The correct approach to adhere to when dealing with an issue of ijtihad is to realise there are two matters at hand: the first is the issue itself and the second concerns those who differ about the issue. There is a set methodology for interacting with both. The first matter discerns how we resolve issues pertaining to ijtihad. Here, we apply the verse, ‘O you who believe! Obey Allah and obey the Messenger, and those in authority amongst you. And if you differ in anything amongst yourselves, refer it to Allah and His Messenger, if you believe in Allah and in the Last Day. That is better and more suitable for a final determination.’5 Allah orders us to refer to Him and His Messenger instead of opting for the easiest option of following our desires. In fact, Allah strongly condemns those who follow their desires in many verses such as, ‘Have you seen him who has taken as his deity his own desire? Would you then be a disposer of his affairs or a watcher over him?’6 Scholars mention that the frequent alignment of one’s actions with one’s desires could well be an indication of intentionally following desire, quite the opposite to the required submission of one’s will to Allah’s, may He be exalted! The second matter informs us how to interact with those who hold a different view that is also valid within the realm of ijtihad. Actions and opinions and their practitioners are respected and tolerated so long as the dispute is convincing and a result of valid ijtihad. Opinions are only to be acted upon with the intention to follow the truth. Thus, when an issue is confirmed to be under the realm of ijtihad it does not permit an individual to opt for an opinion in accordance to one’s whims and desires; this behaviour would lie outside the immense span of Islamic tolerance and would be censured. Mention of guidelines for dealing with such behaviour is beyond the scope of this discourse.

A question frequently posed is, why did Allah allow such disputes to occur? Our Lord declared this life to be a test for mankind; we read in the Qur’an, ‘If your Lord had so willed, He could have made mankind one people: but they will not cease to dispute.’7 Legal disputes offer at minimal three types of tests: the first is to assess whether we will exert all our efforts in unearthing the truth and upholding it, regardless of controversy or pressure, Allah says in the Qur’an, ‘And surely, We shall try you till We test those who strive hard (for Allah’s cause) and the patient ones, and We shall test your facts (i.e., the one who is a liar and the one who is truthful).’8 The second reflects a reality of this life, it underlines the fact that every human being errs, even if he is a scholar. This test is crucial to assess whether we will follow scholars who are in error or seek the pleasure of Allah through the abandonment of our desires. The third test gauges whether we continue to remain steadfast and adhere to Islam in its entirety despite the presence and continuation of disputes.

So, issues subject to legal reasoning [ijtihad] are identifiable by a number of factors: the dispute typically embodies strong arguments for and against; the number of scholars holding the different views is considerable throughout Islamic history; they are normally highly distinguished scholars representing by far the four major legal schools of thought; and are often based on compelling textual evidences. In the forthcoming article I will return to addressing essential concerns in relation to music before addressing matters of culture, Britishness and identity, by the will of Allah ta’ala. 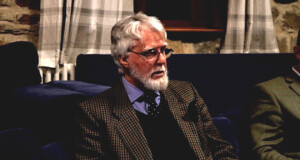