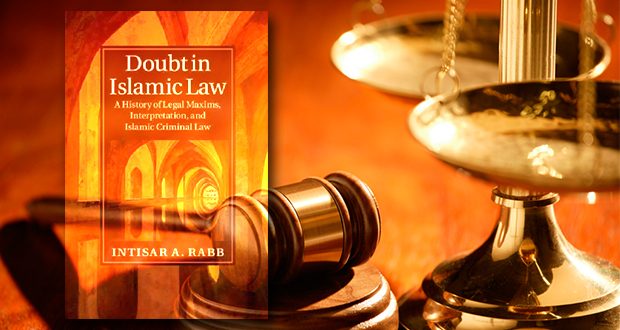 Doubt in Islamic Law – a history of avoiding punishment

“Avoid imposing criminal sanctions in cases of doubt” – idra’u ‘l-hudud bi’l-shubahat – is the juristic maxim at the centre of Professor Intisar Rabb’s phenomenally well-researched work, Doubt in Islamic Law: A History of Legal Maxims, Interpretation, and Islamic Criminal Law. I came to this book largely due to my own lack of insight into the detail of how traditional Islamic jurisprudence viewed evidence and determined guilt or innocence within criminal law cases. Even where guilt was ascertained, was punishment to be taken as a final consequence?

Rabb provides us with an important insight into the history and development of the specific doctrine of doubt within Islamic law. In doing so she furthers our understanding of how the death penalty was understood, or better yet, avoided by Islamic scholars throughout history. Rabb charts the history of this doctrine of doubt, in key, evidencing that a maxim of doubt had reached a consensus by the ninth century, despite there being no specific scriptural source formulating it:

“My fundamental claim is that medieval Muslim jurists, claiming to be textualists, deployed doubt (alongside other extratextual legal maxims) to form a pragmatic method of interpretation that increased their institutional power over law. To accomplish this interpretive task, they articulated ideals of moral values, legal processes, and interpretive authority by which they sought to define the legitimate use of force in Islamic criminal law.” (p.16)

The role of Islamic scholarship or the informal judicial class was to check the power of the state, who might ultimately wield tools such as the criminal law, to effect their own particular brand of justice, rather than ‘justice’ itself:

“The jurists asserted that they, rather than the political rulers, possessed both the religious-moral authority and the institutional competence to determine when avoidance rather than enforcement was appropriate under Islamic law. They established a judicial practice of invoking the doubt canon in this process, a principle that gained virtually unassailable authority once they could cite it as a foundational text.” (p.48)

Rabb goes to great pains throughout the book to ensure that she covers the range of opinions from major schools of Sunni and Shīʿi thought, not limiting herself to majority views within a madhab (school of thought) but rather moving across time periods to show how the schools’ masters and the schools themselves engaged with such issues. Among many examples, she cites Imām al-Shāfiʿi’s ruling that where it is unclear what item has been stolen, the hadd punishment should be waived, “because we avoid hudud punishments in cases of doubt.” (p.52)

Rabb does not shy away from the existence of the punishments suggested in the Qur’ān, and indeed cites the verse that specifically states there should not be a withholding of punishment simply due to leniency. She earlier also references the statement of the Prophet (sall Allāhu ʿalayhi wa sallam) himself, where he expressed that even if his own daughter Fāṭimah committed the offence of theft, he would order for her hand to be cut. Rabb explains this by stating that, “these criminal laws were intended to promote adherence to “Islamic” moral ideals” (p.70) rather than being a prescription for punishment.

Rabb further highlights how the doubt canon took scholarship away from the enforcement of death on moral and ethical grounds,

“Further demonstrating the jurists’ preference to avoid rather than enforce punishment, the doubt canon also assumed formulations that sounded like the old Blackstonian quotation that it is better to let ten guilty men go free than to punish one unjustly. Thus one version stated: “Avoid hudud punishments against Muslims to the extent possible; if there is any way out, then release [the convict], as it is better that the imam make a mistake in pardoning than in punishing.” The second Caliph ‘Umar reportedly said when acting in his capacity as judge, “If you come to me [with a criminal dispute, I would] question to the utmost extent possible, for I would rather make a mistake in pardoning than make a mistake in punishing”.” (p.121)

The most startling revelation of the book, and one that I had no knowledge of, was the attempt by some scholars to bring into fruition a maxim that Rabb refers to as elite-leniency maxim. This attempted principle sought to bring back Arab notions of hierarchy by providing an exemption for notables from the most serious punishments. While Rabb shows clearly how this notion was argued through an erroneous use of the doubt canon, fortunately scholarship withstood the desire of more imperial designs to take root within the canon of jurisprudential thinking. What we learn, is that the implementation of Islamic criminal law cannot be understood outside of its political environment, especially once the generation of the Prophet (sall Allāhu ʿalayhi wa sallam) and first Khulafā (raḍiy Allāhu ʿanhum) had passed.

It is that initial period of jurisprudence, that the book in many ways takes its argument from. Rabb focuses on a few cases from different periods of the Prophet’s (sall Allāhu ʿalayhi wa sallam) life, and from them evidences not only how doubt was used in a practical way in order to try remove the obligation to punish, but also how the generation actively encouraged Muslims in turning a blind eye to wrongdoing. Despite the matters being criminal in their nature, the emphasis was on not reporting, as in the Prophet’s (sall Allāhu ʿalayhi wa sallam) own words:

“It is improper for the Imām, when a hadd crime is raised to him, to do anything but enforce [punishment]. God is [quick to] pardon and loves pardon, so pardon and overlook [the faults of others]! Do you not wish for God to forgive you? For God is oft-forgiving, most merciful.” (p.108)

Intisar Rabb further looks at other issues that have become contentious due to modern practice, such as victims of rape calling out the crime committed against them. Here she relies on the second Khalīfa of Islām, ʿUmar b. Al-Khaṭṭāb, who, instead of taking the woman’s claim as being evidence of confession to a sin, fed and clothed her, and then instructed the Muslims to be kind to the woman. (p.117)

Having benefited a great deal from the entire content of the book, I would be loath to say anything of negative criticism. Perhaps, it would be more appropriate to say that I would have liked to have read more discussion regarding the various narrations around the case of Ma’iz, around which much of Professor Rabb’s argument is made. There is a section early on (p.39) that speaks of some of the different debates, but I would have perhaps preferred more on the chains of narration of Ma’iz running away, especially as the ḥadīth narrated by Jābir in Bukhārī and Muslim does not necessarily make clear this is Ma’iz. Further, it would have been interesting to understand the case of Ma’iz when placed next to that of Buraydah b. Al-Hasīb, who confessed to adultery after Ma’iz and referenced his case as a precedent for wishing the punishment. Perhaps Professor Rabb or others might be willing to interrogate any similarities or differences between these aḥadīth in the future.

The arguments presented in this work are extensive, and they very much convey a strong sense that the history of the administration of Islamic criminal law is a far more complicated matter than is often made out. The lengthy sections that Rabb devotes to each major jurisprudential school of thought is in itself testament to the fact that if there was ever an important doctrine within Islamic law, it is the doubt canon, for its very existence ensures that a just society is one where morality is practiced, not one in which it needs to be enforced. Without the doubt canon we fall prey to whims of those who seek to use the criminal law to achieve political ends. This is best highlighted by Rabb’s assessment of jurisprudence during the Seljuq period of Muslim history,

“Moreover, against the backdrop of excessive executions in the Seljuq culture of political violence, Muslim jurists were signaling through increased rules of procedure something about the extent to which they had come to see the death penalty as different from punishments for ordinary crimes…

So it was that, in Seljuq times, Muslim judges appealed to a textually grounded doubt canon as a way to alleviate moral concerns that came with authorizing punishments that they deemed illegitimate at the hands of political authorities. Together, these judicial practices and the textual doubt canon could allow a morally anxious judge to claim – in the face of pressures from political officials to issue execution orders on doubtful facts – that his hands were constrained by the Islamic law of doubt. Thus, the jurists expressed their concerns through a doubt doctrine that decreased legitimation of punishments until and unless there was factual or legal certainty or a crime and moral certainty of the propriety of its punishment. Such certainty was exceedingly rare.” (pp.124 – 126)

The recent executions in Saudi Arabia have once again brought international attention to the way in which Muslim-majority countries practice their criminal law, especially where death is a prospect. Zinna (adultery/fornication) ordinances and blasphemy laws in Pakistan used almost entirely against the poor and working class; the extent of hangings for ‘deviance in religion’ against Sunnis in Iran; and, more worryingly, the use of Islamic law to justify extrajudicial killings by non-state actors operating across the Middle East, the Horn of Africa and the Asian Subcontinent, has all resulted in a strong internal discussion about the role of Islamic criminal law in the world we live in. In light of all this, Professor Intisar Rabb concludes her book with these thoughtful and useful reflections:

“Continuing foreign influence had the unintended effect of creating nostalgia for an imagined golden era when Muslims, sovereign over their own affairs, were able to implement a criminal law regime ostensibly marked by broad enforcement of Islam’s criminal punishments. Appeals to such ahistoric notions of this imagined golden era brought symbolic legitimacy to actors in West African countries, to name one example, such as Nigeria and Mali. There, these actors have sought to rhetorically restore the rule of Islamic law by enforcing Islamic criminal law through a modern state apparatus or as non-state actors, respectively. Yet these Islamists are not legal scholars, nor are they historians. They tend to be unfamiliar with Islamic law beyond basic texts, which typically contain singular formulations of the substance but not the extensive procedure of Islamic criminal law, as it developed through the doubt canon. In short, the most vehement advocates for Islamic criminal law exhibit little to no understanding of its historical contours, and certainly not of the contextual definitions, function, and uses of doubt.” (pp.320-321)