A Trip Down Al-Aqsa Lane 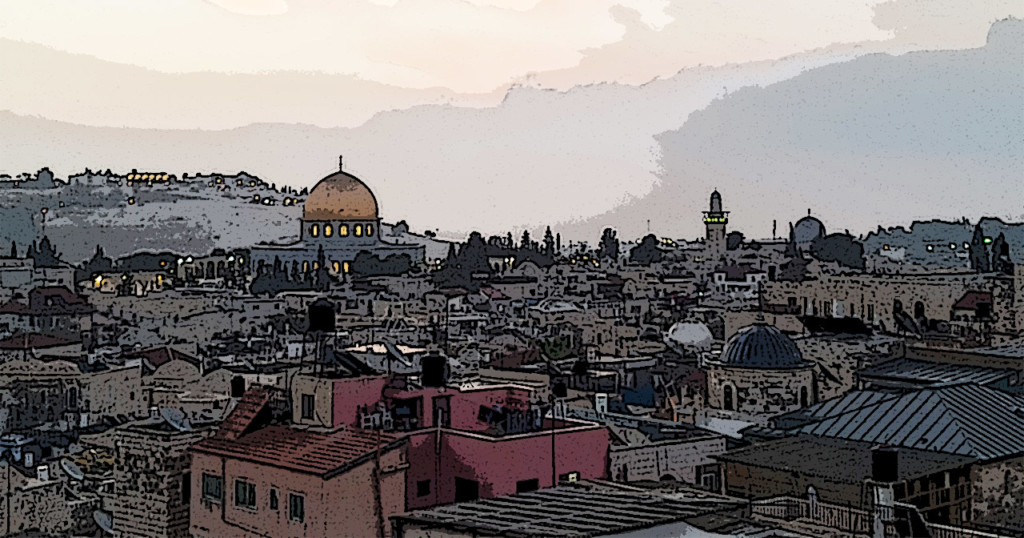 Recently I had the honour of visiting Palestine, more specifically Jerusalem and its neighbouring areas in arguably a time where it has never been safer to do so. The home of the first Qiblah of our Prophet (salla Allāhu ‘alayhi wassalam) and the second instituted masjid ever created on earth; but a more fitting term for this location in accordance with our religiously charged time is the most militarised state in the world. I hope to convey some unconventional reflections from my trip to provide an insight into the land which the world does not see, nor does it want seen. And perhaps for those sitting on the fence, contemplating whether they should make the trip or not with all the conflict, this article could be the answer to your istikhāra you were praying in that regard.

The words of wisdom and caution we received before travelling brimmed us with hope but also fear, fuelled from doubts we read and heard from friends and stories back home. We arrived at Tel Aviv International Airport, the largest and busiest airport in the country in the late afternoon. Seeing the sheer number of people in the queues was exhausting, paving the way for thoughts to wonder about what could potentially go wrong. When I reached the immigration desk, after a few checks on my passport, I was asked what my father’s name and grandfather’s name was. Happy to comply, I gave them what they asked for but instead of letting me go through, I was then asked to wait in a different area as they had to make some “further checks”, fuelling doubts about whether there were discrepancies in my lineage!

To my amusement, more than half of the group was told to wait here, with no prejudice against age, attire or ethnicity, and almost everyone being asked about their paternal family names even though to this day we struggle to see the correlation. After two hours (apparently a relatively short wait), our passports were returned, and alhamdulillāh we were all granted entry into the country.

On the way to the hotel, our guide shared with us a profound gem to summarise this segment of our journey, one that can be applied to all walks of life; not just when you are travelling to lands of oppression. The scholars of Islām say to help us manage our fear, anxiety and general apprehension of the unknown that “the overwhelming majority of things that we fear for the future, never actually end up happening”. It wouldn’t be wrong to assume that like myself, most of our group was worried we would be refused entry and thus spent money we wouldn’t get back, but if we comprehend the reality of this statement, to place our reliance upon Allāh, our heart will be able to rest. This was the land of all the Prophets and Messengers and they were all men who were reliant upon Allāh.

We had to wait two hours, which in hindsight is nothing compared to those who live near the focal point, Masjid Al-Aqsā, who have never been allowed to pray in it. They can see it, hear it and even smell it, but despite being a stone’s throw away they haven’t had the chance to visit, yet Allāh invited us from the UK and allowed such an easy passage. We were reminded that He had favoured us, and this is a good omen and an indication to make the most of our visit. And the next morning we did.

We headed to Masjid Al-Aqsā for the Fajr Salāh. And as we climbed the steep path towards the compound site, I cast my first sight at the checkpoints and Israeli soldiers I had been warned of back home, but not before I saw a depressing sight. With the Aqsā compound only a few hundred metres away, there were needy Palestinian elderly, women and children, after every other footstep just sitting alongside the wall. My advice for those who are preparing their trip to Palestine is to collect sadaqah from your family and friends with the sole intention of giving it to the Palestinians. Unfortunately, we fail to realise the disparity between our lavish lifestyles in the west in comparison to others. We expect good service in every avenue of life and if we feel we aren’t shown this, we complain. Across the world, they don’t have that right to exercise their opinion on matters due to the struggle between political powers, and they have been relegated to a life of poverty.

Passing the numerous wild cats, we made our way up the stairs with the peak of the golden dome slowly revealing itself in its majestic nature, you couldn’t help to pause to take it all in. No descriptive language or even pictures and videos can replicate what it meant to be within that vicinity. The strike of the sunlight against the dome hadn’t even come, yet we were still greeted by a beautiful sight. As we made our way towards the Masjid, there was a stunning outdoor wudū’ fountain placed between the golden dome and Masjid Al-Aqsā. Just as we were heading into the Masjid there was a man outside giving dates, baklava and tea to all the attendees which further boosted that unified community spirit.

I naturally assumed that although it was a Friday, this Fajr prayer will be the calm before the inevitable storm for the peak of the congregation will be at Jumu’ah. I was wrong. Even arriving in good time, the closest spot I could find was five rows behind the Imām. To give you a visual representation, the Masjid is 184 feet wide and can hold up to 5,000 worshippers.[1]

Later came the time of Jumu’ah and if there was ever a sight befitting of the caption ‘strength in numbers’, it was here. The “Āmīn” was a roar, but a welcome roar. A volume that I myself have never been exposed to with all that is going on in the world and the future of this Muslim civilisation remaining uncertain especially in this part of the world. But Muslims of all different shapes and sizes, ethnicities and origins, hairstyles and beards could come together in one location to remain united in the glorification of Allāh, despite the distractions and external forces lingering outside. However, this blessed day aside, those numbers were sourly missing and it was clear to see the need for many more to travel to this neglected land.

After a quick kick about of football with the local Palestinian children, we were given time to tour the markets. It was heartening to see shawarma shop owners give directions to other businesses selling falafel, knowing full well it was not going to further their business or their financial gains. Actions reminiscent of the people of Salahuddin al-Ayyūbi, the great conqueror who recaptured Jerusalem from the crusaders. When he disguised himself to walk among his people to gauge whether they were ready for battle. He found that the shop owners would direct customers to their fellow shop owners, when they had made enough money to feed their family for the day, so they wished for their neighbours to be able to do the same.

It was also in the market area that I came to see the manifestation of Israel’s mandatory military service. Average people you would find on a high street but give them a uniform and a gun and suddenly they become very intimidating. The “soldiers” weren’t all bad with some clearly seeming like their job was a chore. I still recall the time a young Palestinian child innocently shook the soldier’s hand with a smile and that was the first time I saw their human side before their combative mask.

On my penultimate day in Jerusalem, I bumped into a father of six, who works as a window maker. He casually started a conversation with me while we were both performing wudū’. Just as we were walking to Al-Aqsā for the evening prayers, and seemingly as we were going to part ways I said to him that “we make du’ā for you” to which he said words that will echo with me for a while.

“It is not enough to make duʿā, we have to do our bit. The help of the Muslim countries will come. Not now, but soon. Not yet, later.”

Admittedly, I’ve always had a taste for the theatrical, so his response took me by surprise, but delving past the astonishment, I concluded that this man, in addition to the places I visited in Palestine, was teaching me one thing: Taqwa. We have too much fear in our hearts for regulations and disbelievers, but we should divert this fear towards our Creator. We often ask “what we can do to help the situation in Palestine?” but the answer has always been in the Qur’ān.

“Indeed, Allāh will not change the condition of a people until they change what is in themselves.” [2]

We can’t always blame others for the situation that we are in. We need to make it incumbent upon ourselves to rectify our affairs, internally and externally. This is “our bit”; by aspiring to be closer to Allāh and increasing our Taqwa by eradicating our habitual sins – which need to stop if we are truly sincere in our pursuit of helping the Ummah. Because our sins that we commit daily, wherever we are in the world, affect our brothers and sisters in Palestine and the Ummah at large.

To meet this criterion for some includes to strategise and campaign on how to change the situation in Palestine. Sometimes people higher up in the political chain can’t speak about these things, so we, as ordinary working class people must utilise our immense power to speak out without being put down. Then, if in our lifetime, the call for help comes to support our fellow brothers and sisters for the liberation of Jerusalem, we can be part of it.

My parting advice to anyone reading this is to visit the land and don’t fall prey to the political propaganda our screens are feeding us. Al-Aqsā’s past, present and future will always be divisive because this is a sacred area for all major religions. Link yourselves to your heritage, not by being sightseers or visitors of tombs and graves. Go to glorify Allāh (subhānahu wa taʿālā), to give salām and support the locals in their cause, to make duʿā, engage in salāh and to pursue barakah.

Barakah can be loosely translated as ‘blessing’, but as mentioned by an Arabic linguist, it is when something remains where it is. Allāh placed his Barakah around Al-Aqsā and this is proven in the Qur’ān when He speaks about Al-Aqsā; noticeably describing it as a place of barakah for the whole world. In the context of the night journey, Allāh said in the Qur’ān:

“Exalted is He who took His servant by night from Masjid al-Harām to Masjid al-Aqsā, whose surrounds we have blessed, to show him of Our signs. Indeed, He is the Hearing, the Seeing.” [3]

Allāh placed his barakah around this destination; the centre of monotheism where the cradle of culture meets the cradle of civilisation. Thus, you and I must in our heart have an allegiance and a love towards that which was dwelled in by the Prophets of Allāh.

May Allāh grant the freedom of Masjid Al-Aqsā and to our brothers and sisters in Palestine.