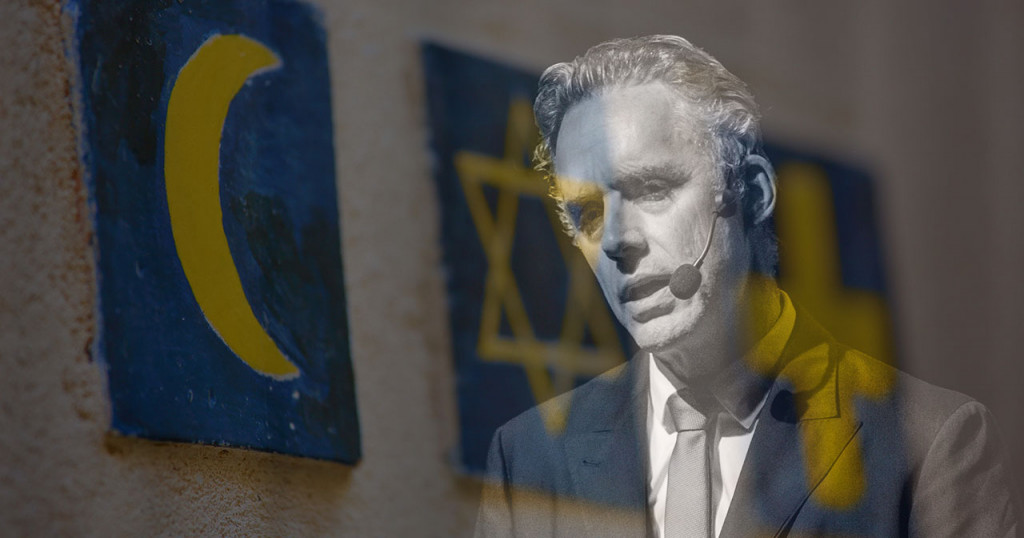 In the Name of Allah, the Merciful and Beneficent

We have been following your journey and return to God which brings us great happiness and joy, hoping that one day you will become a vanguard of the Truth, as all men are meant to be.

Your moral philosophy resonates with many Muslims as it conforms with man’s primordial instincts from God, innate to our heavenly creation (Fitrah). This explains why you have developed a large Muslim following. Your interactions with the respected Hamzah Yusuf and Muhammad Hijab have shown humility and honesty, the foundations of intelligence.

Your recent video ‘Message to Muslims’ unfortunately highlighted deficiencies in your knowledge that we would like to address. Foremost, God is certainly not a mental construct of psychology in order to perpetuate human civilization. He is the One and Absolute Truth which transcends all worldly descriptions and analogies. He is before time as He is now, and He is now as He is after the end of time. The end of creation will return to Him. You appear to recognize a transcendent supernatural reality, I can only assume your reluctance to use the name God, is due to the anthropomorphising of God in Christianity.

My personal journey as someone consumed by Physics to find the answers to the purpose of existence culminating in a PhD in Astro-Particle Physics has made me acutely aware of the limitations of the physical world and transitory, shallow nature of the material realm. What we call Iman, loosely translated to ‘faith’ is in fact the ‘cognisance of the metaphysical realm’ (Gnosis), the dimension of Quality (Plato’s Archetypes) which is not subject to metric measurements.

Indeed, religion’s purpose is to provide the divinely ordained pathway to God. Tragically many of the older religions tend to have been reduced to customs and cultural traditions.

The Quranic narration of Adam’s creation in heaven provides man with his history, purpose and final abode. Knowing the meaning of one’s existence is essential for a healthy, stable, balanced psychology, for an eternal soul.

Moreover, the Qur’an, the Word of God, addresses mankind six times using the words, ‘O Children of Adam’. The enunciation of this phrase inculcates within man his descent from Adam, the father of all men and the first Viceregent of the Truth (God) in Creation.

Furthermore, this title inculcates the knowledge that we are all siblings, one giant (albeit dysfunctional) family. There is no ‘other’ amongst Muslims, there is simply those born in the light of Truth and those born in an environment of dim fragmentary aspects of Truth. Those born and brought up in the light of Truth are obliged to fulfil their responsibility to God, which includes teaching and helping their brothers born in the darkness to find the Light of Truth.[1]

How man engages with the Truth revealed in either environment is how he will be judged by the Just and Wise Creator of the heavens and the earth.

The Qur’an is described as ‘Furqan’, meaning ‘the Criterion’, ‘the Discernment’ or ‘the Discriminator’. The Qur’an discriminates between Truth and falsehood, reality and illusion, good and bad, right and wrong, it is said ‘Truth and falsehood cannot live side by side’. Truth must vanquish falsehood, or falsehood will try to cloud and cover up the Truth. Falsehood is the enemy of Truth. The two are irreconcilable. Falsehood is the distortion of Truth and God is the Truth. To clump truths and falsehoods together is falsehood; ‘the devil speaks in half-truths’.

Islam, the Final Revelation, came to restore the true narrative and Message of the life of Moses and Jesus, hence Muslims recognize Islam as the complete and preserved testification of the same message of the previous Prophets. Muslims see the People of the Book as their predecessors. Islam, being the Final Testament and continuum of the previous covenants, becomes best suited to address the challenges of the modern world.

The Constitution of Medina, ratified by the Prophet Muhammad (peace be upon him) himself in 622CE following his migration from Mecca to Medina, manifests the clear teachings in the Qur’an and Prophetic tradition around peaceful coexistence with Jewish and Christian communities. Two of its many articles outline just treatment of the Jewish tribes in Medina, mutual military support and counsel, and loyalty:

Article 16 – “And that those who will obey us among the Jews, will have help and equality. Neither shall they be oppressed nor will any help be given against them.”

Article 37 (b) – “And if any one fights against the people of this code, their (i.e., of the Jews and Muslims) mutual help shall come into operation, and there shall be friendly counsel and sincere behaviour between them; and faithfulness and no breach of covenant.”[2]

Islam’s solutions for coexistence are embedded in its very essence and manifested in the centuries of its political domination. Jewish, Christian (and even Shi’ite) minorities would not exist today if Islam ever needed overbearing lessons in this department.[3] Tragically, as the Judaic Testament rejects the teaching of Jesus and the Judaic-Christian Testament reject Islam, the culture of tolerating the followers of the Final Testament was largely absent. As a Muslim with many Evangelical friends, I often see their insecurities in the face of Islam.

“˹Remember, O Prophet˺ when Abraham declared to his father and his people, “I am totally free of whatever ˹gods˺ you worship, except the One Who originated me, and He will surely guide me.”[4]

The Abrahamic way was that ‘primordial’ way, submitting to the Creator in radical, non-cultish monotheism:

“Abraham was neither a Jew nor a Christian; he submitted in all uprightness (lit. ‘Muslim’) and was not a polytheist. Indeed, those who have the best claim to Abraham are his followers, this Prophet (Mohammad, peace be upon him), and the believers. And Allah is the Guardian of those who believe.”[5]

Your identification of nihilism as evil gives me hope that your heart will be opened to the Truth. But I urge you to ponder a little further: differences in theology should not necessarily lead to bloodshed, but they are not trivial either. To posit a special chosen people can easily result in notions of racial superiority or to posit God manifesting himself as a human avatar can easily lead to humans attributing to themselves Godlike attributes.

You debated with Slavoj Žižek. His contention with Christianity is that its doctrine of the incarnation leads to Atheism. This doctrine brings God down to a human level, ultimately denying His transcendent and absolute reality “since the external guarantee is abolished.”[6]

In summary, usurping of divine verse with human inventions as happened with the earlier scriptures invariably results in the dissipation of the soul and oblivion. Only the unadulterated word of God gives solace to the soul and anything else leads one astray. This is not to say that we cannot debate in an environment of learning and academic exchange, but we must ultimately acknowledge that we cannot (including yourself) hold fundamental differences and be all, at once, upon God’s chosen way.

The central tenet of faith of Islam is the submission to the One and Absolute God and the establishment of our close, intimate, direct relationship with Him. In the creation of Adam, God tells us that he breathed His Spirit into him. This Divine spark is crystallized as an eternal soul which is fully cognizant of the Truth of the One God. Hence our inherent primordial instinct (Fitrah) recognizes the One God, but some choose to deny this because of their pride and passions.

Islam provides the inclusive, broad, sustaining way of life which is accessible to all human beings independent of culture, clergy or state where man submits to God alone, without idols or intermediaries. Submission to God frees man from any attachment or slavery to a created entity – this is true freedom.

Incidentally, your citing of Sigmund Freud and Friedrich Nietzsche does you a disservice. In many respects these two are the pioneers of modern, hedonistic decadence. One cannot single out the Abrahamic traditions as “the light in the word” whilst taking inspiration from Friedrich Nietzsche, who radically critiqued truth and morality in favour of perspective and famously blasphemed that ‘God is dead’. Is it not revealing that a man who blasphemed in this way ended his days in a mental asylum?

Paul Vitz in his book ‘Faith of the Fatherless’[7] cites the parental dysfunctionality of the fathers of leading Atheists causing their children’s psychological dysfunctionality. These fathers were either abusive, weak or absent. The father represents God’s Authority in a child’s early years. Is it a coincidence that Sigmund Freud, another you often quote, suggests that an ‘Oedipus complex’ drives a child to bear lethal enmity towards their same-sex parent for their envious, sexual desire towards the other?

Tragically, the ‘Abraham Accords’ are neither ‘extraordinary’ nor “have laid out the possibility for peace between all the people of the book.” Instead, these ‘Accords’ are but political horseplay, instigated by irreligious and tyrannical oligarchs for the sake of recognising the illegitimate (and largely secular) and colonial Zionist entity. They are a political ruse designed for the Muslims to accept the injustice of the Zionist usurpation of the native Palestinians. We would not want you to alienate your Muslim friends by supporting this injustice.

The only real unbridgeable chasm within mankind is between those who recognize God and are grateful to Him and those who deny (lie) and live in delusion.

True common ground is to acknowledge God, submit to Him and recognize the Message of all His Messengers and the authority of His books. For enduring peace to prevail upon the earth, it must be preceded by justice and justice itself must be preceded by Truth. We hope, as you do, that both justice and peace prevail over the world and invite you using the same invitation extended to the People of the Book:

[1] Refer to Plato’s Republic ‘Allegory of the Cave’

[2] Mentioned in the Sirah of b. Hisham and Ibn Kathir’s Al-Bidayah wa al-Nihaya.

[7] Faith of the Fatherless – The Psychology of Atheism by Dr. Paul C Vitz 2013, Ignatius Press