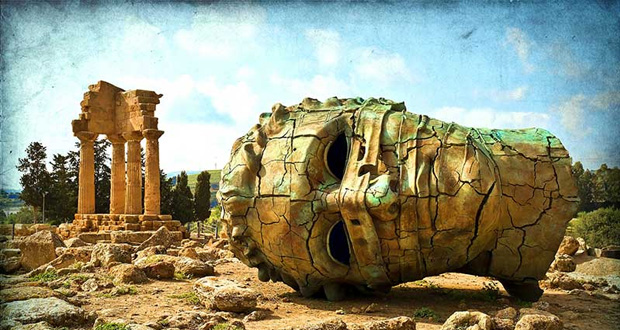 “…Hopefully we will never have to use this power, but there will never be a time that we are not the most powerful nation in the world!”[1]

Similarly, Israel recently had posters up in the country which read: “Zionism is an infinite ideal”. In both cases, it is clear that both nations consider themselves to be invincible, and this is again clear through their provocative actions in opening the latest settlement outpost in Al-Quds, the American Embassy. Many such as Israeli scholar Dr Mordechai Kedar have claimed on the back of the embassy move that ‘Israel is invincible’.

America is by all accounts considered today as the leader of the Western World and its authority is acknowledged, rightly or wrongly, by all over the world. The acid test therefore in assessing and measuring Western “Civilisation” is by evaluating America itself.

In comparison to many others, America is a young nation which was founded in the 18th Century, and yet, within this relatively short lifespan of just over 200 years, you will find a history which is dogged with genocide, torture, slavery, mass surveillance, lynching, racial injustice and prejudice – which is still of course happening right before the world’s eye with the constant reported police brutality against Black Americans. In the same way that America is built upon the genocide and oppression of the indigenous, European settler colonialism and continued oppression of people of other races, Israel similarly was constructed on the back of treachery and deceit, ethnic cleansing, settler colonialism, and continued oppression of the Palestinians, Muslims, Christians and Africans. Its inception is oppression and injustice. The leaders and financial elites of both nations are therefore causing inequality to grow, and injustices to prosper.

The motto America adopts is“In God we Trust”, but is it is clear from their history and their present state that there is nothing godly about their actions, highlighting the root of this issue that America, and the Western World in general, have lost all moral values.

The genealogy of Western civilisations such as that of America reaches back to the ancient Greek and Roman civilisations; it was the result of both of these civilisations that modern western civilisation, which of course is epitomised by America today, acquired the attributes of materialism, secularism, nationalism, and amoralism. The idea underlying the Roman Empire was conquest of power and the exploitation of other nations for the benefit of the mother country alone. To promote better living for a privileged group, for the Romans no violence was too harsh and no injustice too base. The famous “Roman justice” was justice in favour of the Romans alone.

America and Trump would do well to reflect on those mighty ancient empires. By doing so, they would learn that there is indeed a Divine natural order to things: of waxing strong, then waning again. This Divine natural order includes empires and kingdoms and also civilisations, which have their own life cycle. They pass through the exuberance of youthfulness into a vibrant maturity and then, later, as old age approaches, comes a time when strength is sapped by carousing and feasting, and purpose is blunted by excesses and circuses.

Allāh tells us as much in the Qur’ān when He (subḥānahu wa taʿālā) says:

In another verse, Allāh says:

“O people! if you are in doubt about the raising, then surely We created you from dust, then from a small seed, then from a clot, then from a lump of flesh, complete in make and incomplete, that We may make clear to you; and We cause what We please to stay in the wombs until an appointed time, then We bring you forth as babies, then that you may attain your maturity; and of you is he who is caused to die, and of you is he who is brought back to the worst part of life, so that after having knowledge he does not know anything; and you see the earth sterile land, but when We send down on it the water, it stirs and swells and brings forth of every kind a beautiful herbage.”[3]

History shows two things are needed for the walls to finally fall on any empire. First is weakness on the part of the empire, or civilisation; weakness that results when pursuit of pleasure becomes the main purpose of being for the leaders and the citizens, no longer the reward for achieving success in other, more important areas of national endeavour, such as ensuring internal stability, maintaining external security and the creation of material wealth.

“Has not the account reached you of those before you, of the people of Nūḥ and ʿĀd and Thamūd, and those after them?…”[4]

“The Thamud (people) rejected (their prophet) through their inordinate wrong-doing. Behold the most wicked Man among them was deputed (for impiety).“[8]

The world has witnessed America elect one of the most wicked amongst them to carry out the impiety of leading a nation who is considered one of the biggest obstacles to world peace.[9]

The mighty Persian Empire lacked a strong ruler after the death of Xerxes (486-464 BCE). This led to internal commotion, fight for power and infamous revolts. These wars and revolts led to turmoil in the Persian economy making them ripe to be destroyed by Alexander.

It is difficult to reach a conclusive verdict on why the Western Roman Empire fell. It was a long and complex process. If there was a simple answer, the Romans would surely have found it. Whatever the reasons, throughout the fifth century, when emperors could find money and assemble troops, the Roman army was a powerful and effective force. The institution itself was not at fault, but the support it received from its commanders-in-chief, the Emperors, was often lacking. If there was perhaps a single reason for the collapse of the Western Roman Empire, it was poor leadership, not military failure.

“The intrinsic cause that doomed the Roman Empire was not any growing corruption, but the corruption, the evil, the inadaptation to facts in its origin and being. No system of human organisation that is false in its very principle, in its very foundation, can save itself by any amount of cleverness and efficiency in the means by which that falsehood is carried out and maintained, by any amount of superficial adjustment and tinkering. It is doomed root and branch as long as the root remains what it was. the Roman Empire was… a device for the enrichment of a small class of people by the exploitation of mankind.” [10]

The Aztec culture was sophisticated. Its language, Nahuatl, was a rich one. Its mathematics, advanced. Its empire was won and controlled by a fiercely successful military and an elaborate system of taxation and tribute. Yet in just two years, Moctezuma’s rule, and that of the Mexica, collapsed in the face of an invasion led by a few hundred Spanish adventurers bringing an abrupt end to 200 years of Aztec rule.

The same also applies with many of the Muslim dynasties as we saw with the Taifa (Petty) Kings in Spain; the sons of Salāḥuddīn after his death with the Ayyubids, and the Mughals of India after the death of Aurangzeb where weak leaders preceded the downfall of the Empire.

If we are to take the Roman Empire as an example, those in power appeased their populace through “bread and circuses”. The term refers to the idea that a person can be subjugated through superficial distraction and gratification; food and entertainment; indulgence and decadence. With a person’s mind occupied and enslaved – roiling in self-gratification, immorality and gluttony – they are placated and subdued, and subsequently less likely to take to account the politics and governance of their lands and the actions made on behalf of their nations. Such is the situation today. Consider, then, that when those in power are left unchecked their nations eventually fall, heedless and powerless.[11]

The United States is in steep decline and there is no doubt that its best days are now behind it. What the fall of the Aztec rule as referred to above highlights to us is that no matter how advanced, sophisticated and powerful a nation may be, when Allāh decrees their end, it can happen in a very swift manner. This is also a consistent thread that runs through the Qur’ān and the descriptive accounts of how Allāh brought an end to tyrannical rule before.

Death is the end for all of us: the oppressor and the oppressed, the mighty and the feeble, the rich and the poor. Our death is no novelty. Nations before have gone and nations after will perish.

Ibn Batuta related that in the north, there is a graveyard with one thousand kings buried in it. At the entrance of this graveyard is a board that reads:

“The Kings: ask the dirt about them,

And about the great leaders; they are all bones now.”

“Can you find a single one of them or hear even a whisper of them?”[12]

This lesson needs to resonate within all of our hearts. The political elites of Western nation states and their propped satellites may seem to posit themselves as undefeatable, imperishable and to those living within it, destined to rule forever long, however we know from our Ḍīn, from Allāh, of how many powerful, arrogant civilisations built on oppression, and that have in turn continued to project oppression upon the weak, poor and unarmed, have disintegrated.

The downfall of US Imperialism and its systematic, industrialised oppression will also usher in the end of other oppressive states that it upholds and who are dependent on its ongoing rule, such as its proxy dictators over Muslim lands and of course, Israel. In the same way that arrogant civilisations in the past directly called upon the believers and the Prophet of their time to invoke against them, so too today we see nations such as Israel doing the same because, without fail, nearly every Ramaḍān they decide to engage in “war” – implying an equal footing as opposed to the more fitting nomenclature of “genocide” – with the Palestinians. They do this against themselves as, though many Muslims may forget the plight of the Palestinians throughout the year, Israel’s annual slaughter reminds them to make duʿā’ (supplicate) against the Zionist entity in the month of Ramaḍān where supplications are not rejected:

“There are three whose supplication is not rejected: The fasting person when he breaks his fast; the just leader, and the supplication of the oppressed person…”[13]

In response to the question as to whether America and Israel are invincible as both appear to believe, what we do know for certain is that the resolve of the Palestinians to resist is indeed invincible, however I will leave you with the response of our creator, Allāh: