US Military’s control of Hollywood exposed in shocking report 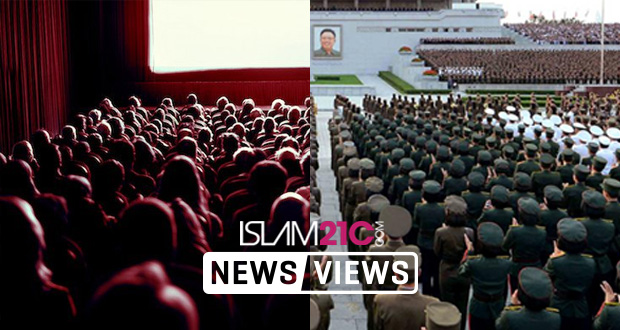 We are all aware of the narrative prevalent in Hollywood productions hailing America as the benevolent land of heroes and the indoctrination of its viewers into sympathising with America’s policies, military and government. They are painted as being the defenders of victims, the knights of valour, the unsung heroes. The propaganda Hollywood productions serve for American interest is so blatant it has become comical. Indeed, in a satirical moment of self-awareness in an animation a news reporter says:

“…and aliens are heading for America… again.”

However, in a recent exposé, the sinister reality of the Hollywood industry’s connection, or rather, subservience to the American Military and Military Intelligence Agencies was revealed. It was discovered that US military intelligence agencies have influenced over 1,800 movies and TV shows.

“Documents obtained under the Freedom of Information Act reveal for the first time the vast scale of US government control in Hollywood, including the ability to manipulate scripts or even prevent films too critical of the Pentagon from being made — not to mention influencing some of the most popular film franchises in recent years.”[1]

According to the report, the US government is involved in script rewrites, character casting, action direction and dialogue, such that

“If there are characters, action or dialogue that the DOD (Department of Defence) don’t approve of then the film-maker has to make changes to accommodate the military’s demands.”[2]

The extent to their involvement is radical and unsettling. From removing any indication of covert military experiments on human subjects or suggestion of military torture of prisoners to censoring mention of or references to past military scandals or politically controversial topics, US military agencies have a firm hold on the estimated 20 billion hours of TV and film watched by citizens in the US and UK alone.[3][4] In a generation wherein the predominant means of media consumption is through TV and film, viewers are oblivious to the “soft” censorship that permeates their “entertainment” and the steady indoctrination they are undergoing with messages sympathising with the US military agenda being systematically fed to them.

Below are only 14 titles amongst those 1,800 documented films and television series influenced by the US government, many of which were released during or after highly controversial American military interventions in foreign countries when anti-war and anti-nuclear warfare sentiments were garnering support.

Tom Secker and Matthew Alford, the co-authors of the report revealing the shocking evidence of the US agency involvement in Hollywood, summarise by saying,

“In all, we are looking at a vast, militarised propaganda apparatus operating throughout the screen entertainment industry in the United States.

It […] represents a major and scarcely acknowledged pressure on the kind of narratives and images we see on the big and small screens.

In societies already eager to use our hard power overseas, the shaping of our popular culture to promote a pro-war mindset must be taken seriously.”

In the Roman era, those in power appeased their populace through “bread and circuses”. The term refers to the idea that a person can be subjugated through superficial distraction and gratification; food and entertainment. With a person’s mind occupied and enslaved, they are placated and subdued, and subsequently less likely to rebel against or even involve themselves with that which is truly important; the politics and governance of their lands and the actions made on behalf of their nations. Such is the situation today, which bodes little well considering when those in power are left unchecked their nations eventually fall, heedless and powerless.

You may also like: Don’t let the War Profiteers Win

[4] Considering the average Briton watches 8 years’ worth of television in their lifetime and the average American spends 10 hours a day consuming media. https://www.nytimes.com/2016/07/01/business/media/nielsen-survey-media-viewing.html http://www.mirror.co.uk/news/uk-news/how-long-actually-spend-watching-7998893