Clarity of Vision: the Fuel for Success 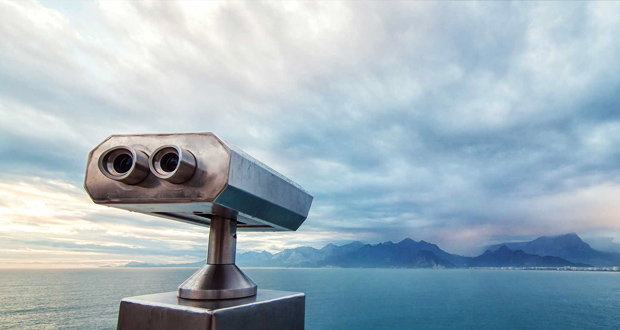 Every person who has achieved something great in this world, has undoubtedly had a vision which they strived towards in order to succeed. The greatest of all people were the prophets of Allāh, who had the greatest and most ambitious of visions, i.e., saving their nations (and beyond) from the Hellfire, and helping them to attain Jannah.

In today’s world, many successful businessmen and politicians have reached their positions due to having worked hard towards their vision of success. Some of the leaders of the most powerful countries show us that striving towards an ambitious goal can see one achieve it, even when one is under-qualified to do so; such is the power of a vision!

The conversation around having a vision or detailed plan to achieve success is one that is frequently limited to management theory and corporate boardrooms, yet the reality is that it is something we should all individually have at the forefront of our minds, as we will come to see.

The Meaning of Success

First of all, let us look at the concept of true success, as every person surely wishes for it and hence it is the starting point of any vision. Success comes in many forms, depending on what we perceive it to be; but ultimately, attaining Allāh’s pleasure and entering Jannah, whilst avoiding the Hellfire, is its very essence. Allāh reminds us of the “great success” many times in the Qur’ān.[1]

In one short sūrah that is probably known to all readers, Allāh gives us a model for success:

Imām Ash-Shāfi’i commented on this chapter of the Qur’ān, saying ‘if people were to reflect over it, it would suffice them’; meaning that it holds the key to success. What we learn from the sūrah is that if one achieves success in the Hereafter, but never achieved any worldly accomplishment, Allāh classifies him/her as successful person. Likewise, the opposite is true; if one achieves great things in this world but ends up in the Hellfire, this is the ultimate loss and failure. The Prophet (sall Allāhu ʿalayhi wa sallam) explained this to us beautifully when he said:

Of course, we live in this world and should undoubtedly seek to succeed here too; the dunyā and the Ākhirah are not contradictory, and it is certainly not a choice between one or the other. Rather, Muslims should seek to succeed in both and be amongst the most successful in this world too (albeit with the Ākhirah as the end goal). This point will be clarified later with the example of Prophet Sulaimān (ʿalayhi al-salām).

The eminent scholar, Ibn al Qayyim Al-Jawziyyah explained this term: ’Uluww al-Himmah by saying that Hamm is the beginning of any action (i.e., when the heart decides to perform an act) and Himmah is what lies at the end of those actions i.e. the end goal / aspirations.

Obviously aspirations can be both good (‘uluww, lit. high) and bad (sufūl, lit. low). ‘Uluww al-Himmah is having lofty goals; the loftiest of which is seeking the pleasure of God Almighty – the ultimate goal of the believer. Taking that understanding into consideration, ‘Uluww al-Himmah is to think little of everything other than this most important matter, keeping perspective on this objective and not letting any other objective get in its way.

We learn that there are those whose himmah does not go beyond this dunyā and others whose himmah is for this dunyā and for the Hereafter. Having mentioned our ultimate goal, a further reflection from this verse is that we should also seek the good of this world, and this is part and parcel of having lofty aspirations. The Ummah would benefit largely in seeing Muslims attaining successful leadership positions, be that in the corporate, political, educational, or any other sphere – whereby a positive influence, directed by Islamic values, can be made.

If we Muslims do not seek to have lofty aspirations in this world and the next and have no vision ahead of us, then we are simply traveling upon a path haphazardly with no end goal in mind. Perhaps we all agree we want Jannah in the end, and we would like a comfortable life in this world too, but without some sort of plan or roadmap to achieve these, can we safely assume they will happen? If we live without direction, we will end up getting involved in things which have minimal value and make little or no progress each year.

Others have a vision for the dunyā; surely the Ākhirah is much greater and worthy of one.

The Concept of a Vision

First of all; what is a vision? It is the starting point for forming a plan or strategy towards one’s goals. Without a vision, there can be no strategy, and hence we find companies spending a large amount of time refining their vision and constantly reminding employees of it. Their end goal may be to reach a certain level of profitability or to become the market leader, but for the Muslim individual and indeed the collective, our end goal is far more important and therefore naturally needs even more thought and focus.

A vision can be explained as:

Articulation of a powerful, achievable, and motivating stretch goal.[5]

Breaking this definition down further, we have:

Conversely, one should be aware of potential mistakes in setting a vision:

What about the Prophet (sall Allāhu ʿalayhi wa sallam); did he have a vision?

A further point to note is that having a vision should not necessarily be limited to our own lifetimes. An example of this was when the Companions were digging the trench for the battle of Khandaq, they found a boulder which was too big for them to break so they sought the help of the Prophet (sall Allāhu ʿalayhi wa sallam).

These were all achieved, but not in his own lifetime (sall Allāhu ʿalayhi wa sallam); rather, we find that his vision lived beyond his time in this world and affected those that followed him.

“He said, ‘My Lord, forgive me and give me a kingdom the like of which will never be granted to anyone after me. Truly You are the Ever-Giving.’”[7]

Sulaymān (ʿalayhi al-salām) was both a king and a Prophet. He asked Allāh for a kingdom that would not be rivalled by any after him. Allāh accepted his duʿā’ and granted him a vast kingdom over which the sun would not set. He placed the wind and Jinn under his control. From this duʿā’ we learn a number of lessons related to having a vision:

To understand the magnitude of his vision, picture this: Sulaymān (ʿalayhi al-salām) has been receiving reward for every single salāh prayed in Al-Aqsā since he rebuilt it during his time!

How Will Having a Vision Help Me?

There are numerous further examples of amazing visions that saw amazing results, from the Salaf and beyond. But the need for setting a vision should be clear. Before moving on to some practical guidance on setting our own, let us briefly mention some of the many benefits in doing so. Having a vision:

Setting Our Own Vision

We have thus far discussed the meaning of true success, the need to have lofty aspirations, and understood the concept of a vision to reach those aspirations. With these in mind, the next step is to set our own visions.

Spend a few days reflecting on your skills, relationships, networks and passions. Then see if you can formulate a clear, powerful vision that will drive you for the rest of your life. Consider the roles you currently have in life and align them to your vision. How can these roles best serve this vision? Or must they be altered or even removed?

With that considered and using the table below, the next step is to chart out milestones in every part of your life that ends with an ambitious goal. Consider each aspect of life carefully, and after plotting the milestones, assess the likely impact on your Hereafter, if they were to be achieved (on a scale of 1-10). 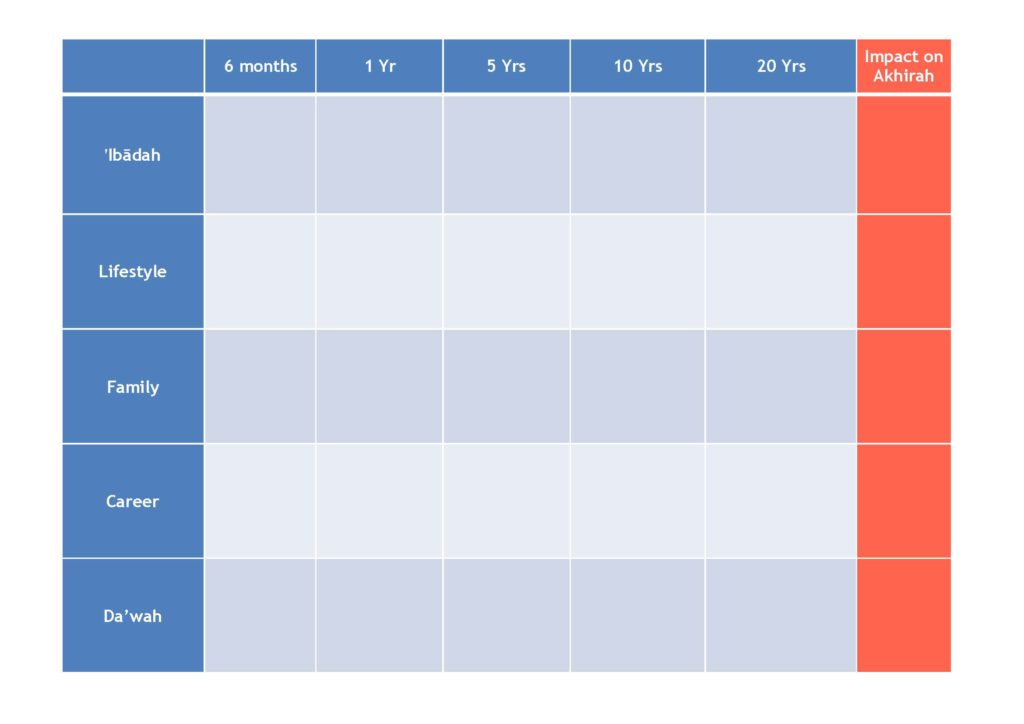 Each of the above areas can be made up of a number of different items, whilst the last column requires careful thought; this will tell us how each goal will impact our ultimate Ākhirah goal of securing the best place in Paradise and salvation from the Hellfire. By giving each a score out of 10, where 10 shows its impact would be tremendous and 1 shows little or no positive impact, we are able to then assess our priorities. Of course if a goal has a negative impact, then it should be reconsidered or replaced.

This exercise is designed to link our life-goals to our Ākhirah, so that we can truly live a productive Muslim life.

Examples of ritual worship goals could be never missing a fard salāh, or praying the 12 sunan rakāt every day, to qiyām every night. Likewise, they could include nawāfil fasts, or reading/memorising a certain amount of Qur’ān, and so on.

Examples of personal habits could be regular exercise; career could include reaching a certain position or starting a business, etc. The following is an example of some completed sections:

Once the plan is formed, we should evaluate progress regularly and try our hardest to remain on track. Using the people around and closest to us for support will not only help but also strengthen relationships.

Lastly, with the above exercise completed, we should attempt to write a statement or vision for ourselves that captures it all.

Through regular duʿā’ and proactive action, these will be achieved. And of course, we should remember that if we are sincere, Allāh will make it easy for us, inshāAllāh.