#STAND4UYGHURS
Home / Current Affairs / Which is the “Correct” Rebel Group in Syria? 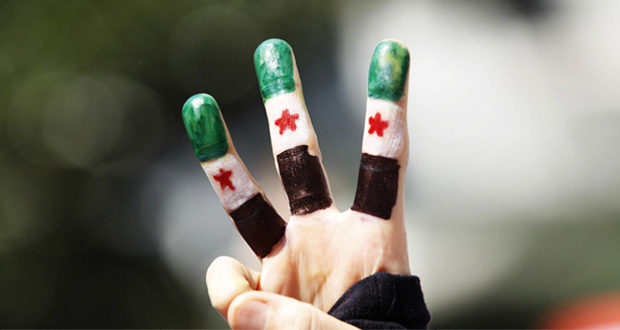 Which is the “Correct” Rebel Group in Syria?

The Syrian Regime and its allies have sought to exterminate the remaining rebel-held enclaves, massacring civilians and trying to force the fighters into surrender. Eastern Ghouta has all but become another Srebrenica, indiscriminately bombed with complete impunity.[1] The world is collectively devastated and rightly so, but a quiet narrative by much of the media seems to be putting the culpability of the carnage carried out by the Syrian Regime and its Russian allies on the armed rebels themselves. This narrative has long argued that the reason for the massacre is primarily due to the presence of unsavoury ‘Islamist’ factions whose exemption from any ceasefire, intentionally or otherwise, provides warrant for some new, ‘acceptable’ level of extermination.

Paradoxically, the same sources will admit that Ghouta, in this case, is held by a mixture of “Jihadist” and “mainstream” rebel groups, fighting side by side but that some infighting has led to losses of ground to the Syrian Government.[2] Meaning nothing but that all rebels control Ghouta. In other words, whether we like the rebels or not, most will agree that they share the same purpose of defending Ghouta against the Syrian Regime.

Over the course of the Syrian revolution, the “Jihadist” and “moderate” differential has been made extremely fickle. Arguably, it is the one thing that has justified for the “humanitarian” west to entirely ditch Syria whilst not looking like it has completely sold out on its value system. Brew a catchphrase and slap on the suffix ‘ist‘; Islamist or Jihadist and turn a blind eye to massacre unchallenged. The ‘quiet narrative’ suggests that anyone defending Ghouta, Aleppo or their like is the cause of the Syrian human suffering.

Some have compared Ghouta to Srebrenica. There is merit to this comparison. Srebrenica’s fate was left to a 145-man UN contingent which idly spectated whilst thousands were massacred. Its ‘Muslim Defenders’,[3] as hailed by the New York Times, were disarmed for guarantees the UN failed to deliver.

Ghouta, for one, has no armed UN contingent, not even one to take selfies and write reports. But what is more damning is that its ‘Muslim Defenders’ are some that have been listed as legitimate targets by the Security Council.[4] If Ghouta is said to be another unfolding Srebrenica, how will dividing the resistance into protected ‘moderates’ and targetable ‘Islamists’ prevent further civilian massacre. Rather, the UN’s gift to the Serbian forces is simply being repeated today and the world cannot claim it is in the dark.

Who are the ‘moderates’ and who are the ‘Jihadists’ if they are cooperating? When ‘moderate’ rebels, by whatever definition, defend, is that not a type of Jihad? Are they then Jihadists for having defended? Baffling. On the other hand, can we as Muslims brand every rebel faction, bar a few, as ‘nationalists’ who do not want to ‘raise the word of Allāh’? Which is the correct faction? Is such a differentiation in light of ‘defending yourself’ even possible?

Before we attempt to address this question, it is fundamentally important to understand the nature of the Syrian struggle and how it has developed. It was not envisaged in 2011 that a peaceful protest movement calling for reform, not necessarily even regime change, would be met with an iron fist.

Many of the defectors from the Syrian army who were instructed to shoot civilian protestors maintained that their manifesto was to protect them instead. Summary executions, harrowing stories and images of torture and rape meant that the Syrian revolutionary sentiment, or indeed families of protestors or defectors, could not possibly be protected whilst those areas were under regime control. And though a naturally ‘offensive’ effort took place to loosen the regime’s grip and surveillance over Syrian areas, the impetus for the vast majority of Syria’s thousands of rebel factions has always been a defensive one. Since then, the world, including Muslims, has been in knots on which of Syria’s plural and diverse rebel groups is the ‘correct’ one.

As a matter of fact, and despite the vast majority of rebel factions identifying themselves as Islamic Rebel factions, in the realm of self-defence, Islām does not differentiate on the lines of ‘intentions’, allegiances, banners, logos, names, areas of control or nationalities. Be their fight against the regime or hegemonic and heretic groups such as ‘Daesh‘ who have never cooperated with Free Syrian Army factions to this end.

Irrespective of desires to ‘liberate’, to ‘establish democracy’, a ‘civilian state’ or the like and removed from the specifics of each faction and its affiliation, the nature of the Syrian struggle is defensive, and as Sheikh Abdul-Aziz al-Tarefe—who is widely respected among Syria’s factions—elucidated in a televised interview on the Syrian question in specific:

“A defensive struggle does not necessitate for the one carrying it out to have formed an intention, seeing as that person is defending his land and his wealth. This is among the matters of Maqāsid (Legal Purposes) and Daruriyāt (Necessities) that the legislator ordered to be preserved, and is much like the one who resists an intruder who has entered into his home or one who attempts to seize his wealth or anything of the like.

Saʿīd b. Zaid b. ʿAmr b. Nufail (raḍiy Allāhu ʿanhu), one of the ten companions to be given the glad tidings of entering Jannah, reported that he heard the Messenger of Allāh (sall Allāhu ʿalayhi wa sallam) say,

What is intended behind this ḥadīth is that a person who defends his honour and wealth, by way of defensive fighting, is a martyr. In another ḥadīth, a person came to the Messenger of Allāh (sall Allāhu ʿalayhi wa sallam) and said:

What is intended behind this is that a Muslim must know that the defensive form, whereby a person defends his honour and wealth from one who wishes to seize it, does not require that one raises the Word of Allāh by way of establishing Islām in the land or the like. Rather a person by this intends only to defend his honour (or wealth). A person is further permitted to defend every wronged person in the same way and for the same reason.

If you find a Mushrik (polytheist), an innovator, a Jew or a Christian for instance whose honour has been infringed or wealth has been seized whilst you see and know that he has been oppressed, then you giving him victory, if that individual requests it, is an obligation. And if you give him wealth in order for that individual to defend his own honour and wealth, then this is a matter a person will be rewarded for since the defensive type does not require an intention… [Therefore,] those who engage in defence are to be supported, even if it is conducted under a nationalistic banner.”[6]

The extension of this to cover other struggles around the world (like Palestine, Kashmir and the like) should be obvious and should not wait for the self-righteous to inform us when a defensive effort is sincere and legitimate and when it is not.

It also comes as no surprise that International Law cannot delegitimise self-defence until it can find a way to classify a group as a ‘terrorist’ organisation,[7] as conventions underpinning self-defence do not differentiate between victims of aggression. What, then, if the defending victim (the rebels) is centred entirely on ending that aggression? The world celebrates the concept of self-determination, be it of an enemy or a friend and goes to lengths glorifying it in movies, even if those defenders are of a categorically different value-system. Recall Braveheart and the Last Samurai to name a few. It takes some creativity to ‘exempt’ others struggling against what one itself admits are war criminals.[8]

Regardless of the world’s views concerning the rebel groups on the UN’s ‘exemptions’ list from its sponsored ceasefire in Ghouta, if by weakening these exempted factions who have classically cooperated with the ‘mainstream’ rebels, is the UN not simply leaving Ghouta to its doom? Just as it left Srebrenica, is it now an accomplice in paving the way for another genocide? Maybe more surprising is that almost a decade into the revolution, and amidst women and children crying for their lives and inviolabilities be defended, people (and governments) still associate with some ‘Muslim Defenders’ over others. What makes a Muslim subscribing to such an association any better than those who have brewed the dubious and damaging ‘moderate’ to ‘Islamist’ differential?

As for the resilient men and women who have sacrificed everything to battle it out with the 21st century’s butcher and to defend the embattled Syrians, they ought to know that their just cause is a singular one, unified on the principles of justice. It is one that transcends banners and slogans. Unity upon this cause should be their greatest endeavour, irrespective of the Fayāliq, the Jabahāt, the Hay’āt and the Katā’ib.

“Obey Allāh and His Messenger and do not quarrel among yourselves lest you lose heart and your momentum disappear. And be steadfast. Allāh is with the steadfast.”[9]

Previous: State of Emergency Declared in Sri Lanka as Muslims are Targeted
Next: #MothersDay – an innovation or Islamic obligation?