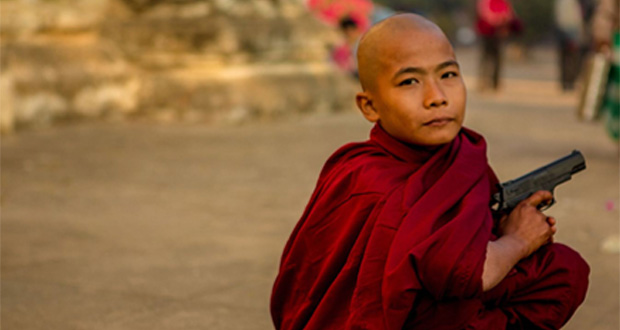 The last two weeks have once again, been a period of immense suffering, fear and insecurity for the Muslims of Sri Lanka (formerly Ceylon) constituting 10% of the population. In Ampara, in the Eastern Province of Sri Lanka, Sinhala Buddhist racists started off a series of well-planned attacks on businesses and a mosque using the excuse of a sterilisation pill which a drunken customer supposedly found in a curry (or a kottu) purchased from a Muslim-owned eatery. Although this was later proved to be unsubstantiated and unfounded, it was however one of the many canards spread by local Islamophobia lobbies to substantiate their claim of widespread Muslim expansionism and Muslims acting against Buddhist interests. The response of the law enforcement authorities was disappointing in containing the violence and in properly prosecuting the main culprits behind those dastardly attacks.

A week later, a road rage incident in Digana, in the Central Province, involving a Sinhala lorry driver and few Muslim youth in a three wheeler, which later led to the driver succumbing to his injuries, was widely shown as a Sinhala-Muslim clash on social media and was exploited beyond imagination as a ruse to initiate another series of racist attacks on the Muslims. The week saw the anti-Muslim violence initiated by racist goons including rogue Buddhist monks spreading like wild fire to adjoining areas creating a climate of fear, hostility and insecurity among the Muslims. Altogether 17 mosques, 150 houses (displacing many hundreds), 113 businesses and about 60 vehicles were destroyed and/or subjected to arson attacks while the Police either looked on or even colluded with the perpetrators, as per many victims’ accounts. Many mosques were desecrated and polluted. There was widespread looting also being reported. One Muslim youth died of severe burn injuries. It was also reported that most attackers were transported from outside areas according to the villagers.

Many human rights watchdogs, civic bodies and prominent monks, placed the blame squarely on the Government and law enforcement authorities and intelligent agencies for failing to identify or even ignoring many prior warnings about the impending “communal clashes” due to the intensification of Islamophobic  propaganda and undercurrents which were at play, especially on social media, and for the delayed action in containing the racist rage. Many Muslims of Sri Lanka today thus feel besieged in the country of their birth, badly let down by a government which came into power in 2015 with minority votes. Although there are still no visible signs of anti-Muslim hostility being widely reported in the mainstream, the overall silence of the majority Sinhalese is however giving mixed signals. The future prospects for peaceful co-existence thus seems bleak, unless concerted action is taken to arrest this trend.

Ethnic or religious clashes or conflagrations however are not anything novel for Sri Lanka. In fact, modern Ceylon’s first ethno-religious riots targeted not Tamils (largest minority) but Muslims in 1915. Then, ever since Independence in 1948 from the British, there were many ethnic conflagrations mainly between Sinhalese and Tamils. According to many scholars, the rise and institutionalisation of Sinhala-Buddhist nationalism in post-independence Sri Lanka bears much responsibility for those ethnic conflicts, which subsequently led Sri Lanka into the infamous anti-Tamil pogrom in 1983 and a 30-year war waged by Tamil Tigers. After the end of the war in 2009, despite initial euphoria, many extreme hate groups sporting Sinhala Buddhist labels emerged, exploiting the then-prevailing triumphalism, and starting off a well-orchestrated hate campaign against the Muslims, spreading unfounded canards involving Halal foods, Hijab and ‘Muslim expansionism and growth rate’ while calling for boycott of Muslim businesses and institutions. Thus, Muslims found themselves in a climate of fear, hostility and insecurity, due to this increased outpouring of virulent anti-Muslim sentiments, widely believed to have the backing of the-then government of Mahinda Rajapaksa, who was credited for having provided political leadership to end the War. In 2015, despite the people having voted for a political change with a clear mandate to promote national reconciliation and fight corruption, Muslims still continue to live under uncertain conditions and have once again become the punching bag, bringing back bitter memories of the Rajapaksa era.

The Muslims of Sri Lanka have a long history of more than 1000 years of peaceful co-existence with the majority Sinhalese, tracing their ancestry to Arabs who have had trade links with Ceylon since the 8th century. History records Muslims acting as royal physicians, defence advisors as well as goodwill ambassadors. Famous traveller Ibn Batuta has also visited Sri Lanka to pay his respects to the “Adam’s Peak” which some believed to be the place where the Prophet Adam (peace be upon him) landed after his expulsion from Eden. Ironically, it was the crucial Muslim support which facilitated the process of Sri Lanka gaining independence from the British in 1948 and help end almost four and a half centuries of European colonial rule in the island. The Muslims also played a supportive role in ending the Tamil Tiger led terrorist war and faced innumerable hardships and suffered massacres from the Tamil Tigers in the North and East Sri Lanka as a result.

Many Post-war social analysts believe that both local political and global factors were responsible for anti-Muslim hate and the Islamophobia campaign in the island. The Rajapaksa regime was widely believed to have used this as a ruse to break Muslim dominance in business and to project themselves as champions of Sinhala Buddhist people. There is also widespread jealousy about Muslim business success. Beyond the borders, there is also a reported link between the main Sinhala Buddhist extremist “Buddhist Power Force” (BBS) in Sri Lanka and Ven. Wirathu, the infamous hate monk from Myanmar (called the “Face of Buddhist Terror” by the Time magazine) who heads the much dreaded anti-Muslim 969 movement which spearheaded the ethnic cleansing and genocide of Rohingyan Muslims. Some also claim Israeli involvement due to their close connections with Sri Lanka in the field of “development” and the well-documented link between Zionist ideologues and international Islamophobia. Further connections with global Islamophobia networks also cannot be discounted.

On the other hand, some analysts also place a part of the blame for the rise of Islamophobia on the change of lifestyles of local Muslims too particularly during the last 30 years. There is a developing feeling among the majority Sinhalese that Muslims are no longer Muslims of Sri Lanka and fear that their lifestyles and attire have become more Arab rather than indigenous, as they once were. The black dress and burqa worn by Muslim women as well as the flowing Arab dress worn by men have become a subject of intense public discourse. Even their habits of irresponsible parking in and around mosques especially on Fridays do cause much annoyance to the non-Muslims. Besides, the community (with their mother tongue being Tamil) also lacks competent scholars in the Sinhala language to dispel misconceptions about Islam and project a positive image among the majority Sinhalese in the South, with whom most of the Muslims live. Further, many women’s rights groups have stressed the need to amend some provisions for the Muslim Marriages and Divorce Act which has faced much resistance from the Jamiyyathul Ulama religious body. Furthermore, hate groups regularly propagate well-known western Islamophobic myths about “Islamic extremism” inculcated into Muslim children through Middle-East funded Madrasas and mosques, while they also propagate many stories about ISIS infiltration, despite denials from the Defence Ministry.

Thus, in the context of the uncertain future of the Post-war Muslims, danger lurks on the horizon about their patience getting over-stretched, in the face of repeated extremist attacks and living with (often-manufactured) frustrations faced by the majority Sinhalese. Muslim patience in the times of the Rajapaksa regime when these hate groups were at their peak, was admired even by the international community. Even today, Muslims have been showing admirable levels of patience without acting rashly, under advice from their religious and civic leaders, even when these racist forces have wreaked much damage. However it does have its limits, and sections of the marginalised community disillusioned due to persistent hate attacks, and physical agony backed by a weak Muslim political leadership and an unresponsive government, may get provoked and react in ways beyond peaceful means. Therefore, this is a social volcano about to explode which the leadership should be cognisant of, to avoid a definite calamity in the making, including all-out fighting from both sides and even a massacres.

Scenes of communal violence against the Muslims in Digana, Kandy

There is thus an imperative need for the government to protect the constitutional rights of the minorities to practice their religion and culture and to live as equal citizens. On the other hand, Muslims too need to look inwards and identify and work on areas which are causing fear among the majority community and arm themselves to counter Islamophobia and to create a positive image about Islam. The Muslims also need to go beyond their cocoon mentality and join hands with like-minded campaigners among other communities for the common good of the public. This is the way forward for the Muslims as followers of a divine religion that taught the world that social justice and peaceful co-existence could be a reality.

https://youtu.be/mfaV3xkY_WI Interview from Navy Commander stressing the patriotic role played by Muslims in ending the War and calling the Sinhala attackers as traitors.

ttps://www.aljazeera.com/programmes/insidestory/2018/03/triggering-communal-violence-sri-lanka-180307144515887.html What is triggering communal violence in Sri Lanka?