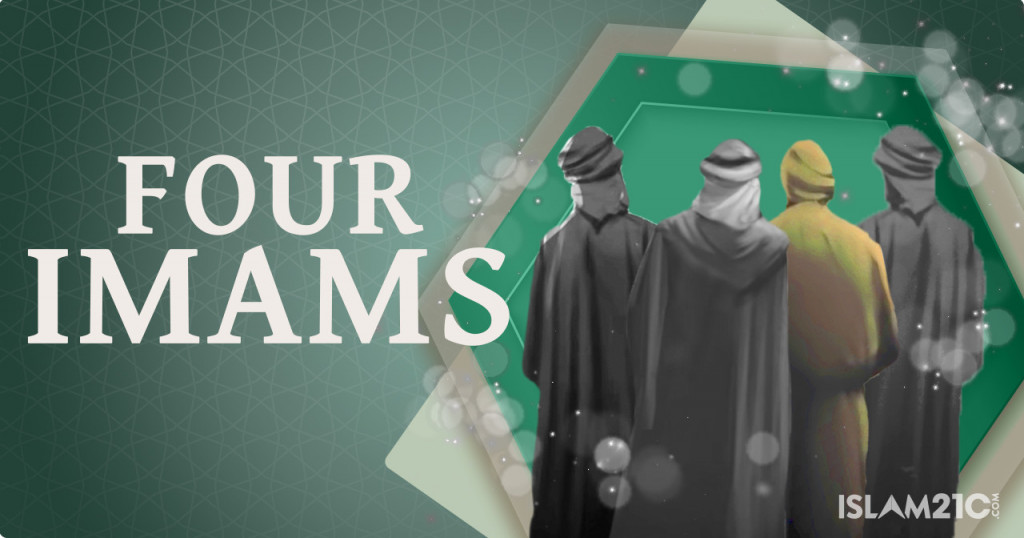 The name of the second of the four great Imāms is Mālik b. Anas. Although of Yemeni origin, Imām Mālik was born in the city of Madīnah in the year 93AH (703CE), the same year in which the Companion Anas b. Mālik passed away.

His childhood and upbringing

Imām Mālik’s quest for knowledge began from his earliest years. At the tender age of 11, he was remarkably able to teach, and by the age of 21, he was in a position to issue Islamic rulings.

It was his father, however, who planted the initial seeds of interest in Islamic knowledge within the heart of Imām Mālik. Recalling a particular event, Imām Mālik spoke of the day when his father posed an Islamic question to both him and his brother. His brother’s answer was correct, contrary to what Imām Mālik answered, so his father said to him:

“Playing with birds has distracted you from the quest for knowledge.”[1]

This angered Imām Mālik, so from that day onwards, he was determined to dedicate himself to the companionship of ‘Abdullāh b. Yazīd (also known as Ibn Hurmuz), a scholar from the Tābi’ūn. Imām Mālik devoted an entire seven years to learning from Ibn Hurmuz, arriving in the early hours of the morning to learn and not leaving until the late hours of the night.

His mother encouraged him to further his knowledge and manners. Imām Mālik said:

What a gift his mother gave to humanity – making a man who would raise an Ummah. With gentleness and intelligence, Imām Mālik’s parents set him upon a path which he remained on for the next 80 years of his life.

Imām Mālik’s mother taught that goodness sprouts from adab (good manners). Indeed, you might come across people of immense knowledge, but they are quick to fall from your eyes when you realise just how vulgar, harsh, and ill-mannered they are. On the contrary, you might across someone of average knowledge, but he is quick to grow in your estimation due to his immense humility and refined manners.

“Students of knowledge would only embark on their journey for knowledge when they had first acquired manners and exerted huge efforts in worship for twenty years.”[3]

“We are in more need of small amounts of good manners than huge amounts of knowledge.”[4]

Some of our predecessors said to their children:

Nāfi’, however, was temperamental, so Mālik was very careful in his approach and displaying immense patience. Mālik would hide in the shadow of a tree, not wanting to impose his presence on Nāfi’. He would then ask Nāfi’ only two or three questions, after which he would make a quick retreat. With this persistent yet slow approach, Mālik was able to amass the knowledge of Nāfi’.

One of Imām Mālik’s teachers was Muhammad b. Shihāb al-Zuhri. Imām Mālik said:

“We would congregate at the doorstep of Ibn Shiḥāb in such numbers that we would end up falling on top of one another.”[6]

In another narration, Imām Mālik took from Ibn Shihāb 40 narrations which he repeated from memory, after which Ibn Shihāb said to him:

“What an excellent vessel of knowledge you are.”[8]

Perhaps the most famous student of Imām Mālik was Imām Al-Shāfi’ī, who memorised Imām Mālik’s Al-Muwaṭṭa’ (a book of ḥadīth and fiqh that includes 1720 narrations from the Prophet ≈ Companions, and Tābi’īn) at the age of 17 years old.

Another student of his was ‘Abd al-Raḥmān b. Qāsim al-Miṣri, who played a chief role in the spread and establishment of the Māliki school of thought in Morocco, Sudan, and al-Andalus.  Students from both of these regions travelled to ‘Abd al-Raḥmān when he returned to Egypt, then established it within their respective regions. Furthermore, ‘Abd al-Raḥmān b. Qāsim, Asad b. al-Furāt, and Ṣaḥnūn together authored Al-Mudawwana, which became the core text in the Māliki school of thought.

‘Abdullāh b. Wahb is another celebrated student of Imām Mālik. One fateful day, when ‘Abdullāh b. Wahb was in a sitting of ḥadīth study, he fell unconscious after he heard a narration on the horrors of the Day of Reckoning. He was carried home where he remained unwell until he passed away.

Imām Mālik took knowledge from many teachers, including the seven famous jurists of Madīnah.  These teachers were from the Tābi’ūn, who in turn took their knowledge from the Companions of the Prophet ﷺ. This is a distinguishing trait of Imām Mālik, who said:

“I have assumed the position of being able to give an Islamic ruling only after seventy scholars bore testimony that I am fit to do so.”[9]

“One must never consider himself qualified to do anything until he receives approval from those senior to him.”[10]

“If the scholars are mentioned, then Mālik is the star.”[11]

“Mālik’s quest and expenditure for seeking knowledge resulted in him needing to sell the roof of his house for the price of its wood. Later on in his life, the world opened up for him.”[12]

In what may be the greatest testimony for Imām Mālik (should the following narration apply to him), the Prophet ﷺ himself said:

“It shall soon be that people will be hastening on camelback seeking knowledge, but they will not find anyone more knowledgeable than the scholar of Madīnah.”[13]

A number of scholars, including Sufyān b. ‘Uyayna and ‘Abd al-Razzāq, have stated that this ‘scholar’ is in reference to Imām Mālik.

“I saw in my dream that I had entered the Masjid of the Prophet ﷺ. I saw him advising the people when Mālik entered. When the Prophet ﷺ saw him (Imām Mālik), he ﷺ said: ‘Come here, come here.’ Mālik approached him until he was close, then the Prophet ﷺ took off his ring and placed it onto Mālik’s finger. I interpreted this to be in reference to Mālik’s knowledge.”

Imām Mālik would prolong his bowing and prostration during his voluntary prayers. When he stood in prayer, he would resemble a dry plank of wood – completely still and serene.[14]

His sister was asked: “What did Mālik do most of his time when at home?” She replied:

“It was purely the Book of Allah and its recitation.”[15]

“Mālik had a nightly portion of prayer. However, on the evening before Friday, he would spend the entire night in prayer.”[16]

“I saw Mālik and he was from those who were humble and submissive to Allah. Allah elevated his rank due to a secret that was between him and Allah. I would frequently hear Mālik saying:

‘Whoever aspires for an opening (of goodness) to be made in his heart, to be saved from the throes of death and the horrors of the Day of Judgment, let him ensure that his private deeds are greater than his public deeds.’”[17]

It is common knowledge that one of the seven categories of people whom Allah will shade on the Day of Resurrection – on a Day when their will be no shade but His – is a person who “remembered Allah in privacy and wept.”[18] The key word in this description is not ‘wept’, but ‘privacy’. One may doubt one’s intentions when shedding tears in public. However, when alone and away from every influence other than the reverence of Allah, this is when the signs of sincerity become far starker.

It is common knowledge that the deeper a peg is thrusted into the soil, the stronger that peg will stand. Winds will not move it even if that peg happens to be thin, because the majority of that peg is in darkness – underground and unseen. However, if you were to lump a huge peg on the surface of the ground without pushing any of it underground, even a small child could push it over despite its size, because all of it is exposed and out in the open. It has no secrets – none of it is in darkness.

Private acts of worship follow the exact same rule. The more you train yourself to worship in secret, the deeper you thrust your peg within the soils of īmān, and the stronger you will be in the face of temptations and challenging circumstances.

Ḥudhayfa b. al-Yamān, a companion who was informed by the Prophet ﷺ of the names of the hypocrites of Madīnah, was once asked by a man: “Am I from the hypocrites?”

“Do you pray when you are alone, and do you repent when you commit a sin?”

“Walk on, for Allah has not made you from the hypocrites.”[19]

Take Imām Mālik’s advice: conceal your fasts, pray in secret, reflect over Allah’s Majesty, and weep in the stillness of the night when your only companion is al-Rahmān. Rather than wasting those times of seclusion to sinful behaviour, view them as a golden opportunity to fortify your īmān and reserve a place beneath the Shade of Allah on the Day of Judgment.

As a person of devout worship, it is understandable why Imām Mālik would be clothed by Allah with the garments of awe. People’s admiration of an individual is merely a reflection of that individual’s reverence of Allah.

“I have never seen anyone of greater awe than Mālik. In fact, his prestige surpassed that of the Sultan.”[20]

“Never have I felt greater reverence towards anyone as I did towards Mālik when I saw him.”[21]

Imām Mālik’s students would slowly turn the pages of their books and quietly sharpen their pencils. Even the leading scholars who sat in his gatherings would not interrupt him, but instead had their heads lowered in respect. No one dared to ask him to repeat what he had said, let alone request the evidence for it. It seems that this was a unique characteristic of Imām Mālik’s study circles – his gravitas afforded him this ability to impose very strict rules of etiquette in his gatherings.

“I have never seen a gathering that had greater reverence than the assembly of Mālik. It was as if birds were sat on their heads.”[22]

“I was sat with Mālik when two geckos landed on his head. They walked on Mālik’s hat then made their way to his neck, until they were beneath his clothes and left from the bottom of his garment, whilst Mālik remained unfazed and unmoved.”[23]

[13] Al-Tirmidhī, on the authority of Abū Hurairah

[18] Al-Bukhārī and Muslim, on the authority of Abū Hurairah