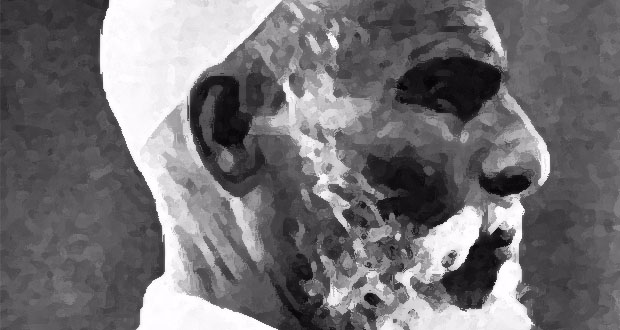 Omar Mukhtar etched his name in the annals of history when he valiantly defended his people, their property and honour by waging the noble concept of Jihād against the brute of European colonialism.

It is reported that our hero Omar earned his nickname as Asad al-Sahara’ – ‘Lion of the Desert’ – during his caravan trails to Sudan as a young man. Such a journey was fraught with dangers not least of it being on the route of a fearsome lion. On one such journey, Omar decided to face the danger head on when with a shotgun in hand and on horseback, he pursued the lion and killed it.[1]

Omar lived a simple life as a teacher having been educated in the schools of the powerful Sanusi Sufi order.[2] He had memorised the Qur’ān in its entirety and was known as a humble and deeply religious man. In 1911 however, the Italians made a grab for Libya from the disintegrating Ottoman Caliphate when Omar was approximately 53 years of age; Abdul-Razaq would have only been approximately five at the time. The Italian fascists, led by Benito Mussolini referred to invasion of Libya as the ‘Roman Reconquista’ ­– “reclaiming” lands which once fell under Roman rule. The usage of the word “Reconquista” was of course interesting given that it is widely associated with the period in history where as part of wider Crusades, Christians set out to conquer Muslim Spain, which they eventually succeeded in.

After 20 years of resisting and inflicting severe defeats and setbacks to their unwanted European invaders, Allāh sought to elevate Omar’s rank in the hereafter (inshā’Allāh) and immortalise his heroic status in this earthly life when He, in His wisdom permitted that that Omar be captured and wounded by Italian colonial forces in 1931. In captivity, Omar was made lucrative offers by the Italians to end the resistance to which he responded that he would not cease to resist:

At the age of 73, Omar was executed and martyred by hanging. When asked if he wished to say any last words, he replied with the Qur’anic response: “Innā lillāhi wa innā ilayhī rāji’ūn” Certainly from Allāh we have come, and to Allāh we will return. Twenty thousand concentration camp inmates and Cyrenaican notables were forced to watch Omar Mukhtar’s death. It is very likely that Abdul-Razaq al-Motarabiah Jilkhaf, who was approximately 26 years of age at the time, was also present.

This brief narrative of the story of Omar Mukhtar is to simply highlight the blessed struggle that Abdul-Razaq al-Motarabiah Jilkhaf was a part of. If Allāh permits, I hope to dedicate a detailed article on Omar Mukhtar another time, inshā’Allāh.

Abdul-Razaq al-Motarabiah Jilkhaf’s death provides us with a link to the struggle of Omar Mukhtar which should continue to inspire Muslims in an age where the colonialist and imperialists which started their ceding of Muslim lands at the time of Omar Mukhtar, has continued unabated today through the use of their agents, dictators and despots whom they had played a hand in installing to continue their dominance over the Muslim world.

It is important that young Muslims revisit the life and thoughts of these great exemplars to gain confidence and to unite to free themselves and the ummah from the grip of the enduring imperialism and coloniality by being upholders of justice and speaking truth to power. It is also worth reminding those who seek to pigeonhole Muslims to divide them by portraying some as ‘violent’ and others as ‘peaceful’, that Omar Mukhtar was a Sufi, part of a group who are today often thought of as being pacifist or otherwise compatible with western hegemony.

May Allāh have mercy on Omar Mukhtar, Abdul-Razaqal-Motarabiah Jilkhaf and all those who valiantly fought against invaders.