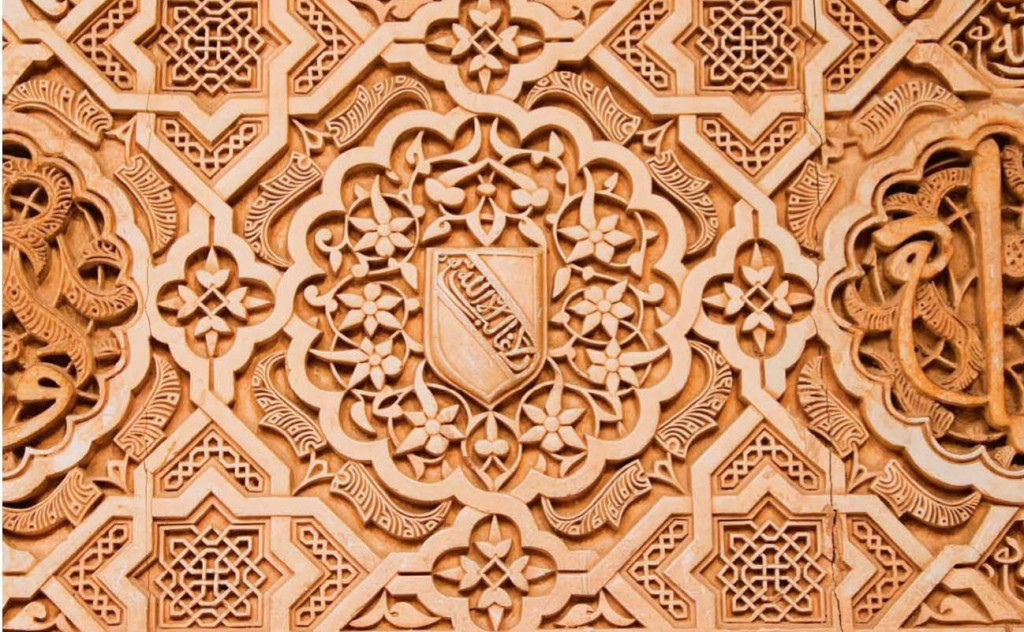 The coat of arms of the Nasrid dynasty on a wall inside Alhambra; the text reads: ولا غالب إلا الله (There is no victor, except Allah)

Islam entered the Iberian Peninsula in 711, and within seven years, most of the region (modern Spain and Portugal) was under Muslim control. By the mid 900s, al-Andalus was home to over five million Muslims and was ruled by a strong, united Umayyad caliphate.

The capital, Cordoba, was known for its culture and learning; indeed, it attracted students from all over the Muslim world and Europe.

However, this golden age of politics and society came to an end in the 11th century, when the caliphate broke up into small states called taifas.

These taifas were vulnerable to invasion by Christian kingdoms in the north, and fell one by one to the ‘Reconquista’ over the next 200 years.

For this reason, the collapse of Islamic rule in Spain was due to both increasing aggression from Christian states and divisions among the Muslim rulers. The early 11th century saw the single Islamic Caliphate shatter into numerous small kingdoms, making them easier for Christian states to conquer.

This marked the beginning of the ‘Reconquista’: the conquest by Christians from the north of the Muslim Iberian Peninsula to the south. The major Muslim cities of Cordoba, Seville, and Toledo were, one by one, conquered between the 11th and 13th centuries by the Christian kingdoms of the north, starting with Toledo in 1085.

The Muslims responded with a fightback led by the Murābiṭūn (Almoravids) and Muwaḥḥidūn movements from North Africa that helped slow the Christian advance.

The Murābiṭūn, led by Yusuf bin Tāshfīn, defeated the Christians in 1086, regaining control over much of Muslim Andalus by 1102.

However, after Yusuf’s death in 1106, Muslim states began fighting each other, leading to internal rebellions in 1144 and 1145 that further weakened Islamic unity. Despite some military successes under the subsequent Muwaḥḥidūn movement, by 1240, the only Muslim kingdom remaining in the south was Granada.

The collapse of Muwaḥḥidūn power in the 1220s had significant consequences for Muslim Spain. After the death of Abū Yaʿqūb al-Muṣtansir, infighting among the Almohad ruling families caused turmoil and political instability in the Maghrib and al-Andalus.

This was further exacerbated by the actions of competing Almohad leaders and the Christian kings of northern Spain, which contributed to the collapse of Almohad control in al-Andalus.

As a result, the Christian kingdoms of Castile and Leon were able to strengthen their military position and take advantage of the weakened Muslim state.

The people of Muslim Spain were unhappy with the situation and revolts broke out, which were exploited by various political parties and leaders such as the Banū Mardanīsh, Banū Hūd, and Ferdinand III.

Ferdinand III was able to conquer Cordoba in 1236 and Seville in 1248, leading to the rise of the Nasrid Dynasty of Granada as the last Muslim kingdom in medieval Spain. The political instability of the time had lasting effects on the region, setting the stage for future conflicts and changes in the balance of power.

The Nasrid dynasty was formed by Muhammad bin Yūsuf, also known as Ibn al-Aḥmar or Muhammad I. In 1231, he became the leader of Arjona and aligned himself with the Banū Ashqilūla for military support.

Over the next several years, he peacefully conquered Arjona, Jaén, Guadix, and Baza, Granada, Almeria, and Malaga through consent.

In order to hold onto his newly acquired land, he became a vassal of the Castilian crown and agreed to a 21-year truce and annual tribute to Ferdinand III. Although the crown of Castile-Leon conquered Arjona in 1244 and Ibn al-Aḥmar surrendered Jaén in 1246, he was able to consolidate his remaining territory into the Kingdom of Granada.

The lengthy truce with Castile-Leon led to a period of relative peace between 1246 and 1264, which allowed Ibn al-Aḥmar to establish the Nasrid dynasty.

The Emirate of Granada was the last Muslim kingdom in medieval Spain, lasting from 1238 to 1492. It was ruled by twenty-three Nasrid rulers from the Banū Aḥmar family, whose main political goal was to achieve independence and resist external threats.

To achieve this, the Nasrids maintained their frontier territory and made slow territorial gains by conquering small settlements that had previously been lost to the Christians. They also engaged in a complex diplomatic relationship with the Kingdom of Castile to the north and the Marinids to the south, while paying tribute to Castile for security against external threats. In addition to these external challenges, the Nasrids had to overcome internal dissent and opposition from the Nasrid elite throughout their reign.

The Golden Age of Nasrid rule was a time of prosperity and cultural flourishing in the Kingdom of Granada. This period is thought to have occurred during the reigns of Yusuf I (1333 – 1354) and Muhammad V (1354 – 1391), when external threats to the kingdom were minimal.

During this time, the arts, literature, and sciences flourished at the Nasrid court.

In 1340, the famous Nasrid vizier and historian, Ibn al-Khaṭīb, entered the service of the court. During his exile to Morocco in 1359, Muhammad V met the medieval Arabic historian, Ibn Khaldūn, and attempted to hire him, but the effort was unsuccessful due to a competitive rivalry with Ibn al-Khaṭīb.

The Nasrid Palace Complex of Alhambra, with its elaborate decoration and ornate architecture, marked the pinnacle of Nasrid cultural splendour, demonstrating the wealth and power of the dynasty during its golden age.

Begun earlier and spanning two centuries, most of the work was completed during the reign of Muhammad V. The palace includes the ‘Palace of the Lions’ and the ‘Cuarto Dorado’.

The Nasrid dynasty of Granada faced ongoing conflict with Christian powers throughout its history.

In 1474, Isabella of Castile became Queen, and five years later, her husband, Ferdinand II, was crowned King of Aragon. The two kingdoms joined forces to launch a campaign against the Kingdom of Granada.

In 1482, the Christian armies were able to take the previously impregnable settlement of Alhama, which was followed by internal dissension within the Granadan state.

The amīr, Abū al-Ḥasan, was overthrown and replaced by Muhammad XII, also known as Boabdil by Christian sources. Muhammad XII continued military warfare against the Christian armies in an effort to gain support.

Muhammad XII led an unsuccessful attack on Lucena, and was captured. This resulted in his release on disadvantageous terms that left him without much support in Granada.

He then abdicated the throne and his father, Abū al-Ḥasan, who was now blind, returned to lead.

However, Castilian military advances continued in Granadan territory and the Nasrids were isolated and received no support from other Muslim monarchs.

In response to a request from the chief Qādi of Granada, the Mamluk Sultan, Qait Bey, sent two friars from the Church of the Holy Sepulchre to plead with Isabella and Ferdinand to spare Granada. The monarchs agreed to uphold the civil and religious rights of Andalusian Muslims, but did not change their plans to advance against Granada.

The final collapse of the Kingdom of Granada was now on hand.

After Abū al-Ḥasan abdicated the throne, Muhammad XIII became ruler, but Muhammad XII unsuccessfully tried to retake power. The Castilian army continued its attacks and Granadan strongholds fell, one after the other.

Muhammad XIII abandoned the kingdom and sold its rights to Castile for 30,000 gold castellanos, while Muhammad XII was unable to defend Granada and famine spread throughout the besieged city.

On January 1, 1492, Muhammad XII surrendered the keys to Granada to the Castilian authorities, marking the termination of Muslim rule in Spain, the end of what has been known as al-Andalus.

The Spanish persecution of the Moriscos refers to the persecution and discrimination faced by the descendants of Muslim converts to Christianity in Spain following the fall of the Emirate of Granada in 1492.

Initially, the Spanish Crown allowed Muslim converts to remain in Spain as long as they converted to Christianity, and many did so in order to avoid exile or slavery.

These converts were nevertheless seen as a potential threat by the Spanish authorities due to their perceived likelihood of secretly practicing Islam. As a result, the Moriscos faced severe persecution, including forced conversions, the destruction of their religious texts, and the suppression of their cultural practices.

In 1526, all of the Muslims in Granada were ordered to convert to Christianity, become slaves, or be exiled, and this prohibition was later extended to the rest of Spain.

Similarly, between 1492 and 1501, the Jews of Andalusia were forced to convert to Christianity or be exiled. Conversos, or converted Muslims and Jews, were accused of secretly practicing their old religions and were severely persecuted by the Spanish Inquisition.

The persecution of the Moriscos reached its peak in the early 17th century, when the Spanish monarchy – fearful of the perceived threat posed by this group – ordered their mass deportation from Spain between 1609 and 1614. This mass deportation had significant repercussions on Spanish society and is often compared to modern refugee and migrant movements.

The Ottoman Empire, which was a major power in the Muslim world, granted sanctuary to Andalusian Jews during the 15th and 16th centuries. This came at a time when Jews were not only facing forced conversion to Christianity or expulsion from Spain, but also persecution through the Spanish Inquisition.

As the Ottoman Empire was known for its religious tolerance, Jews were able to freely practice their religion. The empire also had a large Jewish population and a long history of Jewish settlement, making it a welcoming place for Jews fleeing persecution in Andalusia.

Ultimately, the migration of many Jews from Andalusia to the safety and prosperity of the Ottoman Empire contributed to the cultural and economic diversity of that region.

Ustadh Kashif Zakiuddin is the History Editor at Islam21c. He studied in Syria as well as at London’s prestigious School of Oriental and African Studies (SOAS).