The Rise and Fall of Islamic Seville 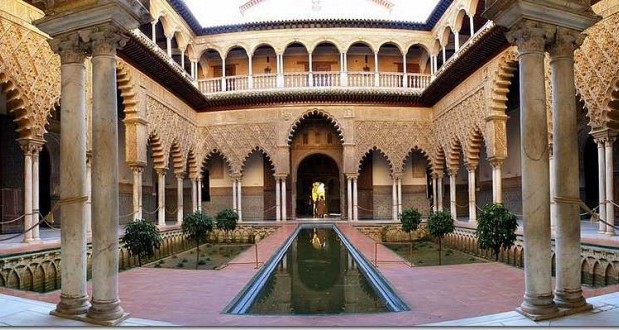 The city of Seville has once again been propelled to our attentions with Sevilla FC recently being crowned champions of the Europa League for a third successive year, this time overcoming an average looking Liverpool team from England.

The city of Seville does of course have its rich Islamic heritage which had made it one of the greatest cities in the western world during medieval times.

By 694, corresponding to 92AH, Islām had spread across North Africa, Persia and Shām. Al-Andalus (Spain) was under the tyrannical rule of King Roderic of the Visigoths who persecuted, oppressed and imprisoned Jews and Christians alike. According to the chronicles of history, a Christian chief Julian, who had fled Spain, called upon the Muslims across the shores for help. The Umayyad governor of North Africa, Mūsā b. Nusair, responded by sending his courageous General at the head of 12,000 troops who landed at a point close to the huge rock which dominates the entrance to the Mediterranean. In Ramadān of that year, they were confronted with an army led by Roderic himself amounting to 90,000. There was an aura of fear and scepticism amongst the Muslim flanks; upon knowing which, the General ordered his loyal men to burn all the ships that had carried them there and were their only source of a safe journey back home. That man, that fearless leader, was called Tāriq b. Ziyād. Once all of the ships were burnt, Tāriq addressed his soldiers and was reported to have said: “We shall now either defeat the enemy and gain victory or die a coward’s death by drowning in the sea “.

The army burst with great enthusiasm to meet the enemy and Allāh manifested a clear victory over the forces of tyranny and oppression, paving the way for the liberation and conquest of Spain.

A year later, Mūsā b. Nusair himself landed in Spain with an army of 18,000 veteran mujāhids. They quickly took Sidonia, Carmona and, after a long siege, took Hispalis. Hispalis was the name given to this city by the Romans and changed to Spalis later by the Visgoths. Now that it came under the territories of Islām, the city’s name was arabised to ‘Ishbillyah’, from which is derived what we have come to know it as today: Seville, pronounced “Savellya” in Spanish, which is almost the Arabic pronunciation. Al-Maqqari said of Ishbillyah that it was “the most important city in Andalusia“.

One of Islāmic Ishbillyah’s famous 12th century scholars was the Muslim botanist, Abū Zakariyah al-Awwam Ishibili, who had identified nearly 600 plants and had developed methods of grafting; in the usual Islāmic fashion, he is named “Ishibili” after the city he came from. But there is more of Islāmic past in Seville, submerged in the famous relics of the Alcazar and the Cathedral, La Giralda.

Ishbillyah was the capital of al-Andalus for three years, between 713-116 – the first Islāmic capital in Spain.

The Umayyad dynasty was then established in al-Andalus with the arrival of Prince ‘Abd al-Rahmān I, in 755. His family, which had ruled the Muslim world from Damascus since 661, had been overthrown by a revolutionary movement which began in far off Khurasan and took power in 750 and with this began  the line of the Abbasid Khalifs, with their new capital in Baghdad. Abd al-Rahman survived the massacre of his family and fled to the west and succeeded in establishing a dynasty that would rule Spain until 1031, moving their capital from Ishbillyah, to Qurtuba (Córdoba).

It was in these years that followed that Ishbillyah began to be transformed from Roman to Islāmic. The first congregational mosque was built in Ishbillyah in 829 and marked the beginning of the transformation. This was the mosque of ʿUmar b. ʿAdabbas, whose foundation inscription reads:

“May God have mercy on ʿAbd al-Raḥmān b. Hakam, the just prince, the rightly guided by God, who ordered the construction of this mosque under the direction of ʿUmar b. ʿAdabbas, qadi of Ishbillyah, in the year 829“.

This is the oldest surviving inscription from al-Andalus. This inscription can be found today above the cloister entrance of the church of San Salvador, which occupies the site of the earliest Sevillian mosque.

Only 15 years after the building of the mosque, the city was to become the venue for one of the great encounters when the Muslims faced the invading Vikings in 844. The Muslims were led by ʿAbd ar-Raḥmān b. al-Hakam II. For further details about this epic encounter, see Muslims v The Vikings.

The age of the Petty Kings, the Almoravids and Almohads

The Umayyad rule was officially abolished in 1031 and was then ruled by independent kingships. Andalusia at this time, which was among the richest and most powerful states in Europe, underwent civil war and fitna, tribulation.

As a result, it broke into small rival emirates fighting amongst themselves and this set in motion the rule of the Taifa Kings – the petty kings. This was a period in which central authority no longer existed amongst the Muslims and cities and territories were fragmented and ruled by different rulers. The Taifa Kings competed with one another. The self-absorption of these petty kings ultimately led to their demise, during which time the Christian rulers became increasingly unified and began to consider expanding into the Southern Peninsula. In many cases, some of these Muslim kings would side with Christian groups against another Muslim state or city.

One such King, al-Mu’tadid, took the throne in Ishbillyah in 1042 and began an aggressive expansion leading to his ruling Western al-Andalus which reached to the Atlantic coast of Bortugāl – Portugal.

In this period, al-Mu’tadid’s son, al-Mu’tamid was required to pay a tribute to the Christian ruler from the North, Alfonso VI. Not wanting to continue doing this, he called on the assistance of a great Muslim personality from across the shores in North Africa, Yūsuf b. Tafshin who had begun a reform movement in Africa known as the al-Murabitun, Almoravids. His powerful army were referred to as the ‘Mulathtamun’, ‘the veiled ones’ from their habit of covering their mouth and nose with their head cloth – as do their modern descendants, the Tuareg.

The Murabitun crossed into Spain in 1086 and immediately inflicted a terrible defeat on Alfonso VI at al-Zallaqah. Ishbillyah was no longer a tribute state of the Christians and was now under the protection of Yūsuf b. Tafshin who thereafter returned to Morocco only to be called back again a few years later. Realising the state of these Taifa Kings and knowing that it was beyond them to unite and set their differences aside, Yūsuf b. Tafshin returned once more in 1091 and, one by one, began taking control of all the Muslim states in al-Andalus. It should also be noted that during this very same period, the First Crusade was well underway carving out their territories in Jerusalem which, by extension, also included a push by the Christians of the Northern Iberian Peninsula to wage their crusade and take over the Muslim territories.

Ishbiliyah, meanwhile, continued to be the capital of Western al-Andalus under the Almoravids, who governed it for 56 years, from 1091 to 1147. By 1094, only three years after tak­ing the city, the Almoravids ruled all of al-Andalus; it was not long before they had extended their sway to most of Southern Portugal.

In the 12th century, a threat to the Murabitun power came from another religious-political movement in Morocco: the al-Muwahhidun, the Almohads. Beginning in 1121, the al-Muwahhidun began dismembering the al-Murabitun state in the Maghrib. In 1146 they crossed into Spain. They took Ishbiliyah the following year and made it their capital. It remained so almost until its final conquest by the Christians.

The construction of the Great Mosque and its minaret, now the cathedral and the Giralda, was the major work undertaken by Abū Yaʿqūb Yūsuf, who began laying it out in the spring of 1172. He had already carried out the restoration of the old mosque of ʿUmar b. ʿAdabbas and many smaller ones, but wanted a mosque large enough for all the faithful, and an unforgettable symbol of al-Muwahhid power. A team of craftsmen from every town in al-Andalus and from as far away as Marrakech was assem­bled, under the authority of the architect and engineer Aḥmad b. Basu. The most precious materials were used – marble, sandal-wood, gold and silver.

The last major al-Muwahhid work in Ishbiliyah is the Burj al-Dhahab, ‘the Torre del Oro’, or Golden Tower – now almost as much a symbol of Seville as the Giralda. Begun in 1220, toward the end of al-Muwahhid rule, it was built to protect the bridge of boats. A heavy chain was stretched across the river from the base of the tower to prevent enemy ships coming upriver, but this security measure lasted only a generation.

Fernando III of Castile, who prized the city, conquered it on 23 November 1248. Legend says when he entered the city on 22 December 646 1248, he rode his steed up the ramps inside La Giralda, the 320-ft. tall minaret of Seville’s large congregational mosque, to proclaim his victory. This was the very spot from which the adhān would be called and the shayaṭīn would run; now the shayaṭīn were calling and the Muslims were on the run. With this came the end of Muslim rule in Ishbiliyah, or, as we now know it, Seville.

Today, Seville is the artistic, cultural, and financial capital of southern Spain. It is the fourth largest metropolitan area in Spain, with a population of about 1.3 million.

One of the main lessons we can learn today from Seville’s and Spain’s glorious past is the period before its ultimate decline, the period of the Taifa Kings. Today, we have Muslims and students of knowledge who are self-absorbed and engulfed in petty disputes of differences, all the while the menacing neo-cons and enemies of all Muslims continue to encroach further on our beliefs. As the saying goes, “He who forgets the past is doomed to repeat it”.

May Allāh unite our hearts and minds and save us from a similar destructive fate as the Muslims of Spain.

[1] Ahmed ibn Mohammed Al-Makkari, The History of the Mohammedan Dynasties in Spain.

[2] Paul Lunde, The Legacy of Al-Andalus