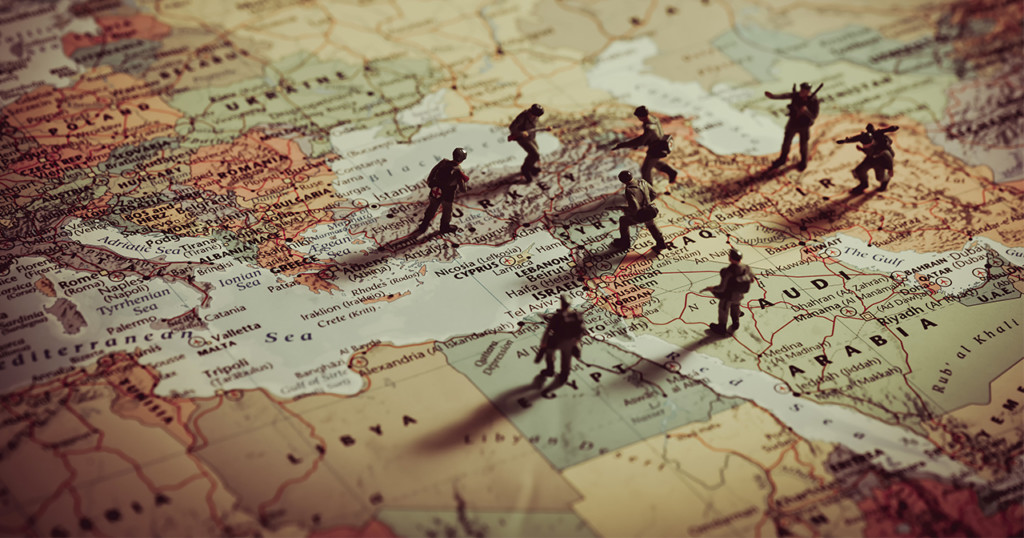 Many of us are unfortunately completely unaware of the events which occurred from 1914 onwards, and the lasting drastic impact these have had in shaping the Muslim world as we know it today. From the dismantling of the Ottoman Caliphate, to the occupation of Palestine and all the way up to today; it is important to be aware of certain key moments in history in order to understand why the Ummah finds itself in its current position.

Turning our attention to 1914, we find the British Empire ruled much of the world, controlling over a quarter of the globe, whilst the USA was not yet a world power. Other large empires of varying strengths included the German Empire, the Austro-Hungarian Empire, the Russian Empire and of course, the Ottoman Caliphate. The Muslim world may have had its share of issues and certainly was not as strong as it once was, yet it still had a united caliphate, global ummah and therefore, a ray of hope.

However, on 28 June 1914, the assassination of Archduke Franz Ferdinand, heir to the Austro-Hungarian Empire led to the “war to end all wars” and the collapse, or at least significant weakening, of many of the globe’s superpowers. The archduke was killed by a group of Serbian nationalists in Sarajevo, igniting nationalistic and ethnic tensions which had been simmering for decades and led to an ultimatum being issued to Serbia by the Austro-Hungarians.

Eventually, they attacked Serbia, leading the Russians to come to their ally’s defence; indeed, European alliances at the time were very complicated and it was all-too-easy to get sucked into war. Soon the Germans got involved; allied with the Austro-Hungarians. They used the war as an excuse to invade a number of neighbouring countries including France, Switzerland, Belgium and the Netherlands.

Slowly but surely, every European and world power was forced into the war, ending up with two camps; the “Allied Forces” of the Russians, the British, French, Italians and USA, versus the “Central Powers” of the Germans, the Austro-Hungarians, the Bulgarians and, crucially for Muslims, the Ottomans.

Whilst there was the odd skirmish in Muslim lands, what became known as The Great War (and later known as World War One) was largely fought within Europe, as it was very much a European issue.

The involvement of the Ottomans

Sultan Mehmed V ruled the Ottomans from 1909 through to 1918. Although the empire ruled much of the Arab lands, it had been in decline for some time already and it is said that the Sultanate had become a figurehead position for the last 100-150 years. The empire had lost Bosnia and Albania before the Great War began and the economy was in tatters, whilst European nations were colonising various lands in their military ascendancy.

In sharp contrast to early Muslim civilisations and much like today’s Muslim world, the Ottoman’s had to rely heavily on others for technological support. The British had provided this support through much of the 1800s until the relationship broke down in 1880, leading to a partnership with the Germans instead. This partnership eventually grew very strong, symbolised by the famous Orient Express in 1889; a luxurious direct train between Germany & Turkey.

When the war broke out, the Sultan was determined to keep it a European issue, and thus attempted to remain neutral. However, certain groups including a nationalistic secular movement known as the Young Turks as well as the Grand Vizier Sa’id Halim Pasha and Minister of War Enver Pasha were working in the background to form a secret agreement with the Germans in August 1914 which became known as the “Ottoman-German Alliance”.

The Minister of War, Enver Pasha is said to have instigated an attack on a Russian vessel in the Black Sea in late October 1914, resulting in the Russians declaring war on the Ottomans on 3 November, with the British and French following suit days later. The Sultan was now left with no choice but to support the secret alliance and, in his role as caliph, proclaimed jihād against the Allied Forces on 14 November.

Various battles ensued, and in early 1915, the British and the French launched the Gallipoli Campaign; a joint attack seeking to conquer the great capital Constantinople. Starting with a failed attempt to take control of the Dardanelles Straits, a land invasion was then launched on the Gallipoli Peninsula in April 1915. The Allied Forces faced fierce resistance and the invasion proved to be a disaster for them, losing over 150,000 servicemen in an eight-month battle.  In January 1916, the Allied Forces withdrew in defeat.

The battle was brutal for the Ottomans too, losing 60,000 of their forces with nearly 100,000 injuries. This victory would end up being their only one of note during the war yet its significance toward the future of Turkey cannot be understated. Victory saw great praise heaped on one commander in particular, a former member of the Young Turks and secular revolutionary seeking the end of Islamic rule; Mustafa Kemal. On the back of his role in this battle and through a wave of a national pride, he would later go on to become the first president of the newly formed Republic of Turkey, with lasting implications.

Returning to the war, various Ottoman lands began to fall to the Allied Forces in quick succession. In 1915, the British invaded Iraq and by March 1917 they marched to the former Abbasid capital, Baghdad – taking down the Ottoman flag and raising the British flag. Later that year General Allenby, who was based in Egypt (which was under British “protection” at the time), launched a series of campaigns into Gaza and Jaffa and eventually marched into Jerusalem victorious on 9th December, ending four centuries of Ottoman rule of the Holy City and fulfilling his promise to capture it “before Christmas”.

Large cities continued to fall; Damascus in October 1918 and eventually Istanbul on 13 November. By now, three of the great capitals of Islamic history were held by the Allied Forces, as was Jerusalem. This was amongst the lowest points that the ummah had witnessed throughout its history.

The immediate aftermath of the war

The war officially came to an end on the 11 November 1918 when Germany surrendered, marking the conclusion of the largest conflict seen by humanity. 70 million had fought, and nearly 10 million soldiers had died. It was the first time that modern technology had been used with such savagery, including air forces and the development of chemical weapons.

The Great War naturally had severe consequences across the globe; some European lands had lost more than 20% of their men whilst famine soon ensued, resulting in the death of millions more. Some reports suggest 3 or 4 times more than the number killed in battle. Worse-still, the world was in the midst of an influenza pandemic commonly known as Spanish Flu, which was widespread between 1918 – 1920. This was the worst plague man had seen since the Black Death of 1320. It is estimated that up to 5% of the Earth’s population (100 million people) died as a result, spanning the entire globe.

One result of these combined factors was the obvious damage to worldwide economies and the vast shortfall in manpower in the work-place. Large social reforms were needed and, for the first time in human history, the roles of men and women were to be re-studied. The workforce was in short supply of men, and women were needed; the majority leaving the sanctity of the home for the first time.

It is worth noting that in 1918, nearing the end of the “first-wave feminism”, women in the West were still greatly discriminated against and it was considered a victory when the Suffragettes succeeded in securing the right for women over 30 to vote, provided they owned a property. It would be some time yet before Western women in general would share equal voting rights (amongst other rights) with their male counterparts. However, a big turning point in the feminist movement was the introduction of women to the workforce on a mass scale from 1918 onwards.

In the next part, we will consider the total collapse of the Ottoman Caliphate and the resulting British-led conversations on how to divide the Muslim lands.

Largely based on a lecture by Shaykh Yasir Qadhi at the Memphis Islamic Centre:
https://www.youtube.com/watch?v=qh9awD5KwNY