Promises that divided the Muslim World 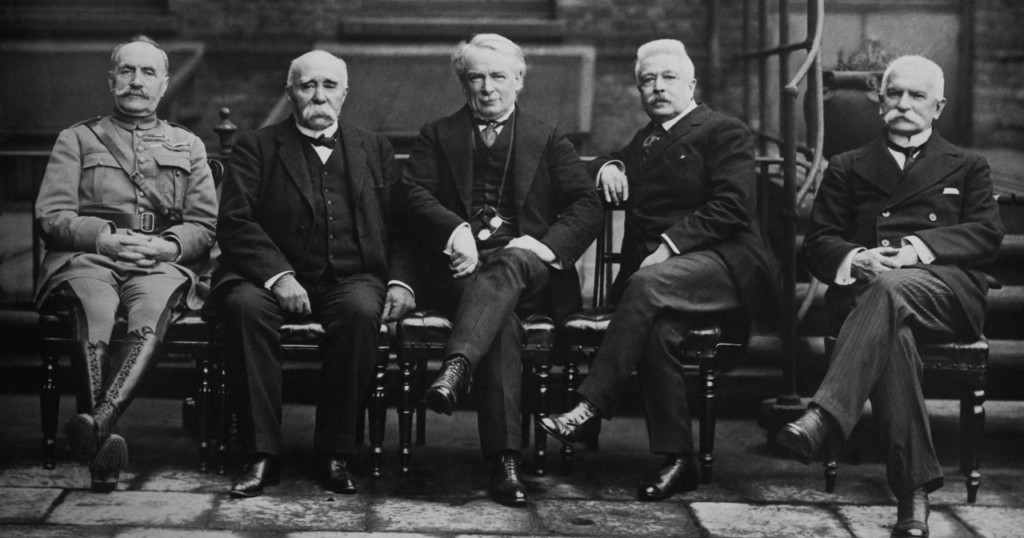 Following the end of World War One in November 1918, the victorious Allied Forces came together to discuss their preferred terms for peace and how to divide the spoils of war. This gathering in Paris, known as the Paris Peace Conference of 1919, lasted a whole year with thousands of delegates from around the world attending to petition and negotiate; seeking trade, independence, influence, and so on.

Five major treaties were prepared, each dealing with one of the defeated powers, whilst the League of Nations was formed with the aim of maintaining world peace; an organisation which was later replaced by the United Nations in 1948 after World War Two. Amongst the treaties, the key one affecting the West was the Treaty of Versailles, which included detail of the measures to be placed upon Germany; particularly, expensive reparations totalling 132 billion gold marks (US$ 33 billion at the time).

The years ahead would see the emergence of Adolf Hitler, and many argue that the excessively harsh terms placed on Germany contributed to his rise to power. He was seen as a saviour to the underdog complex created, who could bring back German pride and power, eventually leading to World War Two which left Europe decimated and established the USA as the world’s superpower.

The McMahon Promises and the Arab Revolt

Focusing once more on the Ottoman and Muslim lands, a useful starting point might be the role of T.E. Lawrence, also known as “Lawrence of Arabia”. He was a young British Intelligence Officer stationed in Egypt who worked closely with General Allenby during the war in defeating the Ottomans and taking control of Arab lands.

Lawrence was fluent in Arabic and is known to have received £200,000 per month from the British government to aid his intelligence activities in forming alliances with various Arab nationalists, and ultimately provoking a civil war in Muslim lands.

In his role, he formed strong relationships with a number of Arab-nationalists who wanted to split from the Ottomans and, in particular, he worked very closely with the Emir of Makkah, Sherif Hussein ibn ‘Ali al-Hāshimi; a direct descendent of the Prophet (sallAllāhu ʿalayhi wasallam) whose family had been granted rule over Makkah for over 700 years.

In 1915, the Sherif made it known to the British that he was willing to lead an Arab revolt against the Ottomans. Although he had initially remained loyal to the Ottomans, his son ‘Abdullāh was worried about their increasing nationalistic aims and influenced his father to begin secret discussions with the British. Given the Sherif’s lineage, he was seen by the British as someone who would be given legitimacy by fellow Arabs and therefore an ideal partner for their plans.

In a series of letters between the Sherif and the British High Commissioner in Egypt, Sir Henry McMahon (who was the highest-ranking British diplomat in the Middle East), an agreement was reached to break from the Ottomans and grant the Sherif his own caliphate; an independent Arab state spanning the Hejaz, Syria and Mesopotamia, which in today’s terms is much of Saudi Arabia, Syria, Kuwait, Iraq and beyond. This grand plan became known as the McMahon Promises.

Thus in June 1916 the Arab Revolt began, under the guidance of T.E. Lawrence, with the Arabs attacking Ottoman forces and quickly severing the railway which linked the Arab peninsula to Damascus and hence preventing Ottoman reinforcements from arriving. The Arabs were soon in control and the Sherif declared himself the King of the Hejaz in October 1916.

The Arabs were now waiting for McMahon to make good on his promises, but this wait would continue until the Paris Peace Conference of 1919, before which, it would emerge that the British had conflicting deals in place with other parties as well.

Between November 1915 and March 1916, the British held secret negotiations with the Russians and French, planning on how they would carve up the Ottoman Empire between themselves in the presumed event of its collapse. The Russians wanted much of Turkey and Armenia, whilst the French were interested in Lebanon and Syria, and the British had their eyes on Palestine and Arabia, including Jordan and Iraq.

Led by Mark Sykes (Britain) and François Georges-Picot (France), they gathered around a map and drew arbitrary lines to carve out lands based on various assumptions and preferences, giving no thought to existing ethnic groups and the various sectarian differences that existed across these lands. Neither Sykes or Picot had any real knowledge of the Muslims lands, and neither had travelled there; rather it was just an exercise on a map, which still largely represents much of the Muslim countries in that part of the world today.

The secret agreement was signed by the British and French in May 1916, with the approval of the Russians. However, the Russians would later face an internal revolution, with the Bolsheviks coming into power in 1917. The new leadership sought to discredit the former Tsar and made the Sykes-Picot agreement public, resulting in the Russians losing claim to Ottoman lands.

To the embarrassment of the British, news of the agreement was reported worldwide and their double-dealing was now clearly exposed. Sir Henry McMahon resigned in response, and his replacement Sir Reginald Wingate successfully, although completely disingenuously, managed to convince the Sherif that the promises would still be upheld in time.

Amidst the double-dealing mentioned, the British were having yet another conversation about Muslim lands. The powerful World Zionist Organization (WZO), established in 1897 by Theodor Herzl, was set up with the primary goal of establishing a homeland for Jewish people in Palestine. Jews across Europe were facing increasing anti-Semitism and hence there were growing calls from within to establish their own state.

At first, the British offered the Zionists a 5,000 square mile area in East Africa as their official homeland; this was known as the British Uganda Program, although the land is now part of modern-day Kenya. The proposal was discussed by the WZO in 1903 and eventually rejected – the goal remained Palestine. The British government was largely supportive of the Zionist cause, for a number of potential reasons, including:

– Political gain; the Jewish population in England were relatively wealthy and powerful, and hence there was political capital to be gained in supporting the Zionist cause.

– A key leader in the WZO was Chaim Weizmann; one of Europe’s richest men, who became a close acquaintance of the then Prime Minister, Arthur Balfour around 1905. Weizmann would later convince Balfour to support the notion of a Jewish state in Palestine.

Weizmann’s business was the production of acetone, an essential ingredient in the manufacture of bombs and explosives. When the Great War began, the price and availability of acetone naturally became of vital strategic importance and he was asked to increase production by 1,000%.

Thus the need for the British to keep Chaim Weizmann happy is rather obvious. When the issue of payment for this acetone was mentioned, it is said that he was not interested in money; only Palestine would do.

– Another potential reason for the British support at the time was the Christian connection with Judaism, and the fulfilment of the promise of the second coming of Jesus. This is evident today as well with many Christians, particularly Evangelical denominations, being more pro-Zionist than some Jewish groups themselves. The Prime Minister Lloyd George (1916 – 1922) was himself an ardent Evangelical Christian. Their desire for the Jews to be in Palestine is not driven by any agreement with Judaism, but rather they believe it is a precursor to the return of Jesus (ʿalayhi al-Salām).

It is also worth noting that the Americans at this stage were not particularly supportive of the Zionist agenda. In fact, many mainstream Jews in the US scoffed at the idea of a Jewish homeland in Palestine and only began to support Zionism after Hitler’s emergence some decades later.

With the above in mind, days after the war against the Ottomans broke out, talks began in the British cabinet about promising this homeland to the Zionists. These continued until August 1917, when the cabinet voted to support the motion, despite the strong objections of the sole Jewish member of cabinet, Edwin Samuel Montagu, who pointed out that such a move would cause great alarm in the Muslim world and create enemies which did not previously exist.

Edwin Samuel Montagu, a practicing Jew, was aware of the implications of Zionism, which he labelled a “mischievous political creed”.[1] He appreciated that Muslims and Jews were not enemies for the bulk of history, and that the Jews had always found sanctuary in Muslims lands from Christian persecution – but this motion would now create enmity. At the time, Jews only made up 5-10% of the population of Palestine.

However, Montagu’s views were the minority; the motion passed. The Foreign Minister at the time, Sir Edward Balfour, eagerly wrote to Lord Rothschild on 2 November 1917 to declare the news and for it to be passed on the WZO. The short declaration read:

His Majesty’s government view with favour the establishment in Palestine of a national home for the Jewish people, and will use their best endeavours to facilitate the achievement of this object, it being clearly understood that nothing shall be done which may prejudice the civil and religious rights of existing non-Jewish communities in Palestine, or the rights and political status enjoyed by Jews in any other country.

With the above three conflicting promises in mind, much was up for grabs at the Paris Peace Conference of 1919 where British attempts were made to keep all parties happy. The Muslims were clearly aware of this embarrassing display of double-dealing by the British, yet were still somehow on side with them and naively believing their empty promises.

In the final part, we will discuss the outcomes of the 1919 discussions and consider some of the implications that followed.

Largely based on a lecture by Shaykh Yasir Qadhi at the Memphis Islamic Centre: https://www.youtube.com/watch?v=qh9awD5KwNY