The Dismantling of the Muslim World 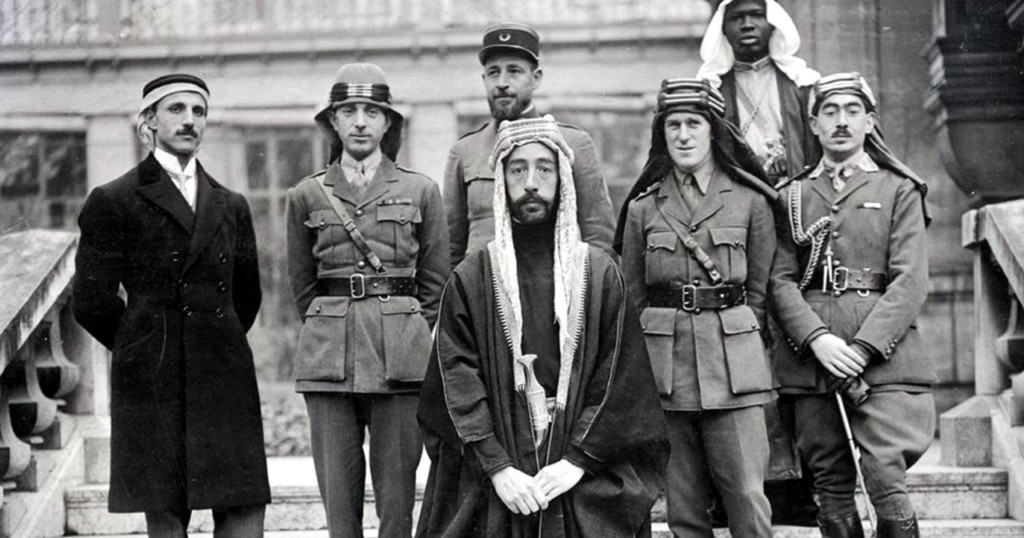 As discussed in part 2, by the end of the Great War, Muslim lands were marked for division and distribution in three conflicting agreements:

During the Paris Peace Conference of 1919, the various parties all came to argue their cases. T.E. Lawrence was there, supporting his good friend Faisal ibn Hussein (one of three sons of the Sherif) in their claim for an Arab caliphate. Chaim Weizmann was also present, demanding Palestine for the Zionists. Naturally the British and French were to discuss the Sykes-Picot Agreement as well.

The US President, Woodrow Wilson, was neutral on the Zionist matter and suggested an independent study to assess, amongst other matters, the viability of setting up a Jewish homeland in Palestine. This study was carried out by Henry Churchill King and Charles R. Crane; two Arabic-speaking academics who immediately commenced a tour of the Arab world and spent some months surveying the area and holding talks with local groups. This was referred to as the King-Crane Commission.

They concluded that the establishment of a Jewish homeland in Palestine would be impossible without severely trampling on the rights of the existing population, saying that “Zionists looked forward to a practically complete dispossession of the present non-Jewish inhabitants of Palestine, by various forms of purchase”, noting that 90% of the population were vehemently against Zionism.[1]

The commission strongly recommended that the very notion was scrapped. The report is unlikely to have been read by Woodrow Wilson as he suffered a stroke a day after receiving it, and its publication was then suppressed until its release in 1922. Of course, the findings themselves were ignored in the end, as there were other influences holding greater sway which were quite happy to overlook the obvious detrimental and lasting impacts of such a move.

The Zionists were granted their desired homeland in Palestine, although their ultimate goal of a state, i.e., Israel, would only come after World War Two. Prior to this, Lord Curzon (who succeeded Balfour in 1919) would remark about Chaim Weizmann:

“I feel tolerably sure . . . that while Weizmann may say one thing to you, or while you may mean one thing by a national home, he is out for something quite different. He contemplates a Jewish state, a Jewish nation, a subordinate population of Arabs etc., ruled by Jews; the Jews in possession of the fat of the land, and directing the [British] Administration. He is trying to effect this behind the screen and under the shelter of British trusteeship.”[2]

Jews from Europe started to flow into Palestinian territories from 1919, with land being acquired and even seized from the Palestinians. The subsequent injustices and occupation carried out in the name of Zionism are well known and continue to this day. The numerous events and wars between then and now, along with Zionist militancy against the British – and of course the impact that these have had on the Palestinians – is well known and would perhaps require a separate series of articles.

Meanwhile, the Sykes-Picot Agreement was ratified at the conference; a portion of Syria became a French protectorate, and out of this, the French created a new country, Lebanon, intended for the Maronite Christians. The French would remain in control of these lands until they were thrown out after World War Two, after quashing the Great Syrian Revolt in the late 20s. They also curved out separate states for the Druze and the Alawites.

During French rule, they sought a willing partner that would be loyal to them over their fellow Syrians. They found this with the Alawites, who were known at the time to be largely uneducated and illiterate, yet vicious and barbaric; frequently raiding Sunni properties and killing their men and women. The general masses of Syrians were afraid of them due to their renowned barbarity.

The French empowered them with military support, schools and various other measures, essentially “civilising” them according to their own agenda and propping them up over other Syrians. The Alawites gained increasing presence and prominence in the army which eventually saw them come to power after independence. One historian, Daniel Pipes, likened the notion of the Alawites ruling the Syrian people to that of “an untouchable becoming maharajah in India”.[3]

The implications of these French actions and this aspect of the Sykes-Picot Agreement remain to be seen to today, with the murderous crimes of both Hafez Al-Assad before and his son Bashar today.

Moving on to the British; they were to help themselves to the lion’s share: Transjordan (today’s Jordan, Palestine and Israel), Iraq and Arabia (Hejaz). The British were now figuring out how to handle the Sherif’s expectations as well as the Jewish homeland in Palestine.

In the end, they decided to place each of the Sherif’s sons in charge of each territory, albeit still ultimately under the rule of the British:

‘Ali ibn Hussein was to rule Hejaz / Arabia, and called himself the King of Hejaz. His rule was short-lived however, spanning just over a year to December 1925 when the Āl-Saud family, who had been gaining territory and power, kicked him out and took over Makkah, ending 700 years of Hashemite rule. The Āl-Saud were ironically, yet unsurprisingly, also supported by the British and still remain in power of modern-day Saudi Arabia.

‘Abdullāh ibn Hussein was to rule Jordan, proclaiming himself as King of the Hashemite Kingdom of Jordan. This dynasty remains today and is the only one of the appointed leaders that could be called “successful”, if remaining in power is the definition of success. His grandson Hussein was king from 1952 until 1999, and his son ‘Abdullāh rules Jordan today (the great, great grandson of the Sherif of Makkah).

The third son Faisal ibn Hussein, who was the closest to T.E. Lawrence, was put in charge of Iraq, where most people had not been aware of him. Faisal ruled until his death in 1933, which was suspected to be due to poisoning, and was succeeded by his son Ghazi until his own death six years later. Ghazi’s son, also named Faisal was named as successor, albeit he was underage and hence Ghazi’s cousin served as regent until 1953.

Faisal II’s rule came to an abrupt end in 1958. His forces, led by Abdul Karim Qasim, staged a coup in July that year, rounding up the entire family (men, women, elders and children) and executing them in the palace courtyard. A key grievance that led to the coup was the ruling family’s subservience to the British, including supporting them in their invasion of Egypt in 1956. The general population were far more sympathetic to their fellow Muslims than British interests.

The coup was supported by the Ba’ath Party, who expected the new leader Qasim to follow their pan-Arab vision. However it quickly emerged that this was not to be the case, and they attempted a coup of their own in 1959, led by a young army cadet, Saddam Hussein. The attempt failed, but another coup would succeed in 1963 and various leadership tussles would ensue, ultimately leading to Saddam Hussein being named Deputy President in 1968. He eventually forced the President to resign in 1979, and began to rule with an iron first until his removal 24 years later.

The Treaties of Sèvres and Lausanne

Another matter settled at the Peace Conference was what to do with Turkish Ottoman lands. With the Russians no longer party to the Sykes-Picot Agreement, the Treaty of Sèvres (which was only signed in 1920 after 15 months of negotiations) effectively granted control to the British. Several restrictions were placed on the Turks, with their finances under British control and the military kept limited in size and equipment to prevent growth.

The terms of the treaty were said to be more severe than those placed upon Germany, and hence the treaty did not last long. Whilst the terms were still being agreed, the Turkish War of Independence was ongoing between proxies of the Allied Forces and the Turkish National Movement, led by Mustafa Kemal “Ataturk”, who eventually succeeded in bringing the Allied Forces back to re-negotiate a new treaty.

The conflict was finally settled by the Treaty of Lausanne in 1923 (effective from August 1924), which defined the borders of the new Republic of Turkey – one sixth of the size of the former Ottoman Empire – and acknowledged the end of the khilāfah, a form of which had been in existence from the time of Abū Bakr (radi Allāhu ‘anhu) until that point. The caliph, ʿAbdul Majid II was sent into exile, while Mustafa Kemal was named as the president of the new republic.

Kemal was a staunch secularist and nationalist, and sought to remove any Arab or Islamic influences from Turkey. He very quickly banned the recitation of Qur’ān in Arabic and instructed that the call to prayer (adhān) and prayer itself (salāh) were recited only in Turkish. He also banned the hijāb and shut down religious schools. Generations would be raised from school-age onwards with strictly secularist principles. The effects of his secularist “reform” would go on to be felt for many decades, perhaps with some positive signs finally emerging in recent years with an Islamic revival in much of the country.

It reminds us of the hadīth of the Prophet (sallAllāhu ʿalayhi wa sallam):

“Other nations will soon summon one another to attack you, just as people when eating invite others to share their dish.” Someone asked: “Will that be because of our small numbers at that time?” He replied: “No, you will be numerous at that time: but you will be scum and rubbish like that carried down by a torrent, and Allāh will take fear of you from the breasts of your enemy and cast al-wahn (enervation) into your hearts.” Someone asked: “What is al-wahn, O Messenger of Allah? He replied: “Love of the world and dislike of death.”[4]

The aim of this series has been to shed light on the events of 1914 onwards which have shaped the Muslim world as we know it today, with particular focus on the Middle East and Turkey. It is evident that the impact is still widely felt today and it should be noted that in the grand scheme of things, this was all fairly recent. The last survivor of World War One only died in 2013, whilst it is said that some of the children of the last caliph were still alive as recently as 2014 (and might still be).

Through this series, we have seen many unfortunate instances of greed, disunity and naivety from some Muslims, whilst European self-interest and double-crossing is plain to see. The Muslim world today suffers from numerous issues, with political weakness and subservience to Western interests on frequent display.

Yet there is reason for optimism. Generations have lived through the aforementioned events and realities, and concerted efforts have been made to water down Islām and reduce it to simple acts of ritual worship under the banner of secularism. Today we have many liberal voices given prominence by both government and mainstream media seeking to continue in the same vein.

Nonetheless, these attempts are clearly futile; slowly but surely, many are growing disillusioned with life bereft of īmān, and Muslims around the world are increasingly identifying with their dīn, seeking to practice and study Islām in growing numbers. This was certainly not the case in 1918. Therefore, even though the light may still be far down the tunnel, the direction of travel is positive and it is only a matter of time before we see successful change, inshā Allāh.

Largely based on a lecture by Shaykh Yasir Qadhi at the Memphis Islamic Centre:
https://www.youtube.com/watch?v=qh9awD5KwNY