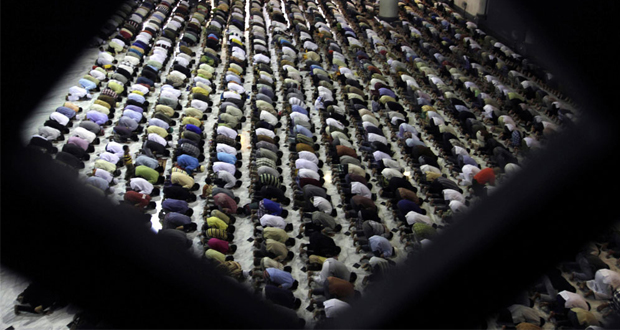 Following the success and popularity of the tarāwīh prayers during Ramadān this year, Islam21c has learnt that hundreds of mosques across the country will in fact be continuing to hold similar congregational prayers at night.

Witnesses have reported them as considerably shorter than the tarāwīh prayers, which typically lasted over an hour during Ramadān. One of Islam21c’s contributors who were at the scene of one such mosque carrying out the prayers, reported:

“These prayers—which they are calling ʿIshā—are so much easier than the tarāwīh prayers during Ramadān, but for some reason there are far fewer people taking advantage of them. During Ramadān, you had to block out a good few hours—coming early to compete for parking spaces—but today I was in and out in just 15 minutes!”

Towards the end of this Ramadān I happened to hear a recording from this time last year, and recalled a perspective-changing question. The question was: what is the point of a “training”?

One of the metaphors continually used to describe Ramadān on puplits all over the world, was that it is a training experience for our relationship with Allāh, particularly our taqwa:

“O you who have believed, decreed upon you is fasting as it was decreed upon those before you that you may become righteous [literally: practise, exhibit, increase taqwa].”[1]

While we were in the month, we understandably remained focused on carrying out the various acts of worship that were increased qualitatively and quantitatively due to the blessing in Ramadān. But as a result, we often overlook a goldmine: the impact that it has after Ramadān.

Therefore, many who now miss Ramadān may take solace in the fact that the “main event” that the training-dimension of Ramadān was preparing us for is: now. Ramadān prepared us for the following eleven months until the next Ramadān. Out of His mercy, Allāh put so many things in place to prepare Ramadān for His slaves, from locking up the shayātīn to creating an atmosphere generally more conducive to this preparation.[2]

As a result, Ramadān engaged a range of our faculties from the elasticity of our neurons, to the speed or efficiency of transmission across certain synapses, to “muscle memory”, to our metabolism and even the mechanics of our digestive systems. Now we have developed habits, it is often more difficult to break them than to carry on with them.

How did Ramadān prepare us?

For example, on the last night of Ramadān, as many Muslims broke their final fast, a great number of us automatically checked the time. Chances are, subconsciously you were checking to see how much more time you had left to go to the tarāwīh prayers, after weeks of conditioning. Maybe enough time for a tea or coffee, before you had to head out to get a space in the mosque. But instead of nurturing that habit and continuing it—taking advantage of training dimension of Ramadān—if previous years are anything to go by, then sadly most people who attended tarāwīh will not continue to come to the masjid for ʿIshā after Ramadān—despite it being so much easier and more sustainable than tarāwīh. The same goes for those who were not praying before but started to pray in Ramadān.

There is still time to carry on the momentum. Praying ʿIshā in the masjid has shown itself to be a very easy habit. Will we continue or talk ourselves out of it?

Another—more obvious—habit we developed was of fasting. Before Ramadān began, we told ourselves how difficult it would be to fast the long, hot, summer days, but by the tawfīq of Allāh, most of us did it. The world did not end. We are still alive (probably more so than before). Now, those same whispers and doubts are slowly returning, but our bodies are the same, and still capable of fasting regularly. What better encouragement to fast now than the promise of the Prophet (sall Allāhu ‘alayhi wa sallam):

“Whoever fasts Ramadān then follows it with six days of Shawwāl, it is as if he fasted for a lifetime.”[3]

There is still time to carry on the momentum. Fasting has shown itself to be a very easy habit. Will we continue or talk ourselves out of it?

Another example of the muscle memory we saw many Muslims exhibiting was reaching for the charity bucket when leaving the masjid during Ramadān. Automatically, hands went into pockets to drop some money into the charity box whilst leaving the mosque. After Ramadān, many hands now likewise automatically go into pockets when eyes catch a glimpse of a charity bucket. However, now that the shayātīn are released, their hollow threats of poverty return, despite Muslims giving profusely during Ramadān and not becoming poor. The lying, treacherous shayātīn promise, but the truthful, trustworthy Prophet (sallAllāhu ʿalayhi wasallam) also promises:

“The wealth of the servant does not decrease by charity.”[4]

There is still time to carry on the momentum. Charity has shown itself to be a very easy habit. Will we continue or talk ourselves out of it?

Finally, among the many other types of worship we reacquainted ourselves with in Ramadān is our closeness to the Book of Allāh. No matter who you are or what level you were at previously, during Ramadān everyone came closer to the Qur’ān to some degree. Just like the Qur’ān descended to the Preserved Tablet in Ramadān centuries ago, likewise in Ramadān for many of us the Qur’ān descended from the top shelf of a book case, was unshrouded and read for the first time since last year. Do not let it go back up for more than 24 hours.

When we had a target in mind to read an amount of Qur’ān daily, we found time and space to read the Qur’ān regularly during Ramadān. Whether it was a few āyāt during our lunch break, a few pages during our commute to work or school, or forcing ourselves to sit down and read something before bed, we managed to read more than “normal” before Ramadān. Chances are, our daily schedule did not grind to a halt due to this, we still managed to carry out many other errands—perhaps due to the barakah put in our time.

There is still time to carry on the momentum. Reciting the Qur’ān regularly has shown itself to be a very easy habit. Will we continue or talk ourselves out of it?

Remember the purpose of a training

The main event that the training-dimension of Ramadān was preparing us for is now. Those of us therefore who participate in Ramadān only to go “back to normal” in Shawwāl, are like the student who spends sleepless nights preparing for an exam, who does not turn up to it. Those of us who fasted the hot days and prayed long into the night who abandon these habits are similar to an athlete who trained intensively for a competition, but did not turn up to the main event itself.

It is from the sunnah to end an act of worship with istighfār (seeking forgiveness), not because of sin per se but because we acknowledge our shortcomings, the perfection of Allāh and His deserving of much greater glorification than we offer. We ask Allāh to forgive our shortcomings and accept what little we offered. Every one of us therefore has a chance to excel in our journey to Allāh.