“I won’t be eating Qurbani meat this year, will you?” 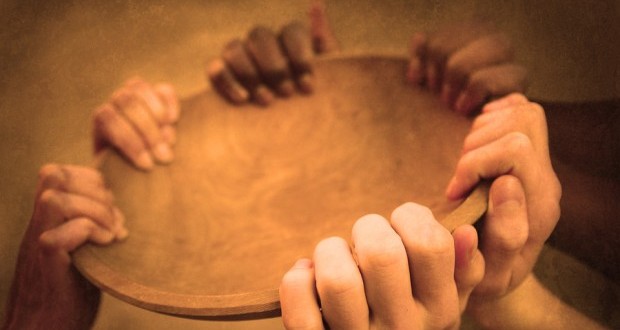 Sacrifice is an offering whereby that which is offered is given to your Lord while you are in total submission and obedience. With that said what does giving a sacrifice mean to you?

The greatest illustration of sacrifice is in Ibrāhīm (ʿalayhi al-Salām) from whom the Islamic tradition of Qurbani descends. Ibrāhīm saw a dream. Rushing to his son, he said

“My son, I know I have seen in a dream, that I must sacrifice you. My Son what do you think.” He accepted testifying, “Father, do as you are commanded. You will find me, if Allāh wills, of the steadfast.”[1][2]

So he and his son went to their place of sacrifice; in total submission. Ibrāhīm turned his back on his innermost desire for a son. Ismāʻīl had forsaken his innate human yearning for life. Both of them submitted to Allāh. Ibrāhīm placed him on his forehead to begin his sacrifice.[3] It was at this moment that Ibrāhīm was ordered to sacrifice a goat in his son’s place. You have to ask yourself what does this mean?

What are you ready to sacrifice?

We take from Ibrāhīm the tradition of Qurbani every year, but do you ever wonder why? What does this Goat mean? For Ibrāhīm, the goat took the place of his son, the only thing he wanted most in this life. For him it meant offering to God his worldly desires, entering into a complete station of submission, Islam. For us, worldly desires often occupy the seat in our hearts that should be reserved only for Allāh. We turn our desires into our goals and ambitions.

The animal you sacrifice is a representation of your desires. Allāh does not ask for us to make a huge sacrifice; He asks for us to sacrifice our wealth for His sake to help the needy.

The Prophet Muḥammed (sall Allāhu ʿalayhi wa sallam) said “I fear that this world will be opened up with its wealth for you, as it was opened to those before you; and you will compete with one another over it, as they did and eventually it will ruin you as it ruined them”[4]

We live in a time now in which consumerism is the focus of our lives. We measure success through wealth and possessions. We have become deluded into believing the pursuit of happiness can be achieved through money, fame, possessions and competition. We often forget the reality of true happiness is with Allāh. We have around us all the hearts can desire. Were an Arab Bedouins to arrive at the local supermarket they would be astonished by the extensive varieties of bread, let alone other foods. It is in this state we have an amazing opportunity; we can forsake this abundance for Allāh’s sake and turn our hearts away from desires and into submission towards Him, we can make a sacrifice.

Giving in charity is woven into the fabric of our Dīn. With Zakāh a pillar of Islam and the sacrifice on ʿīd al-aḍḥā prescribed for those who can afford it, Allāh reminds us time and time again that to give in charity is to be in a fortunate position. Whereas ‘giving’ and ‘donating’ often carry the impression of losing a part of your wealth, to sacrifice our wealth for the sake of pleasing Allāh and fulfilling His commandments is to truly gain. As Allāh says in the Qur’ān,

Who is he that will lend to Allāh a goodly loan so that He may multiply it to him many times? And it is Allāh that decreases or increases (your provisions), and unto Him you shall return.[5]

We are also taught by our Prophet (Sall Allah ‘alayhi wa salam the virtues of alms-giving in its many forms.

The Prophet (Sall Allah ‘alayhi wa salam) said: “The believer’s shade on the Day of Resurrection will be his charity.”[6]

The Prophet is also reported to have said: “Give charity without delay, for it stands in the way of calamity.”[7]

The sacrifice made on ʿīd al-aḍḥā and its distribution to the needy is, indeed, noble. To be in a position wherein we are able to offer the sacrifice and help those in need as a result of it, as opposed to being amongst those who receive it and are in need of it, is a favour upon us from our Lord.

Offering the Qurbani is an opportunity for us to reflect on our father Ibrahīm (ʿalayhi al-Salām), to follow in his footsteps and to recognise that our sacrifice could never be as great as what he was prepared to give.

What are we willing to sacrifice for our Dīn?

Which of your desires do you treasure more than you should?

What are you willing to sacrifice to please Allāh?

Allāh asks us to sacrifice the wealth of a single goat. Would you delay in doing this? Will you hesitate? Or will you rush to please your Lord, obey His command, and sacrifice your wealth for those truly in need? This year I will not be eating my Qurbani. I think we should sacrifice it and give it to those who really need it. What will you do?

Moḥammed Ibrāhīm al-Shafiʻi (Reece Byfield) is a public speaker, who has delivered various talks as well as participated in FOSIS tours around the U.K. He is currently in the third year of an ʻAlimmiya (Islamic scholarship program) studying under Shaykh Akram Nadwi at al-Salam Institute, as well as having studied with post-graduates from Madina and al-Azhar universities. He is also a philosophy student.