Islam is the Cure to Racism 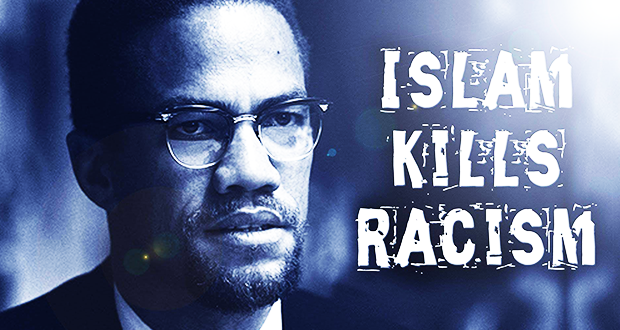 Black History Month – Islām is the Solution for our racial problems

Racism is evil. It divides us. Through it, hatred, conflict and tyranny ensue and from that emerges untold suffering. Yet the racist cannot see it. This is because for them others are not truly human in the same way that they are. This is because racism is the belief that one is superior and better purely by virtue of their race or the colour of one’s skin, or ethnic origin. It is the idea that only my race and only my group of people are truly human. Everyone else is inferior. Everyone else is other. Furthermore, it is the idea that the qualities of goodness and being right reside with one’s people and no one else is truly capable of it!

Racism is a normal, natural and almost universal human condition. It is almost impossible to root out. Even if it is defeated in one form it almost as quickly manifests itself in another.

An example in front of our eyes is how anti-Semitism, which used to be rampant throughout Europe for centuries, has now transformed itself into Islamophobia. The horrors of the Holocaust quite rightly ensured Europeans would never look at anti-Semitism in the same way again but that same bigotry has only transformed itself into another manifestation. What was formerly hatred, fear and loathing of Jews has now become hatred, fear and loathing of Muslims. It is the same mutated virus, the same disease, in a different form.

Europeans, it seems, need to have someone to hate and despise. In England, the Jews, Italians, Germans, Irish, Afro-Caribbeans and Pakistanis, and now the Polish have all had their turn at being the kicking end of xenophobia and racism.

Racism is in fact a form of tribalism. Historically, almost every single tribe, race or major group of people have had mythologies that put them at the centre of the world as the true and direct descendants of the gods.  So the idea that goodness and virtue is a by-product of one’s heritage rather than a result of one’s actions and deeds alone is an old and almost universal one.

Through such a belief, attacking, enslaving and occupying other people’s land and taking their property becomes not only acceptable but in fact a moral imperative!

European imperialism was in no small means an extension of this.

There have of course been attempts throughout history to overcome this debilitating human condition.

The successful, extensive, and multi-cultural empire that was the Persian Achaemenid Empire (550–330 BC) absorbed Mesopotamia, Egypt, parts of Greece, Thrace, the Middle East, and much of Central Asia and Pakistan,[1] [2] [3] [4] [5] [6] [7] [8] until it was overthrown and replaced by the short-lived empire of Alexander the Great.[9] The ancient Greeks had a broadly racist idea of their own innate superiority. In fact the term “barbarian” was used by them to refer to everyone who was not Greek. Alexander the Great (albeit himself Macedonian and thus not a true Greek) according to some tried to break down such concepts throughout his extensive empire.

The Roman Empire was certainly one of the most multicultural in ancient history. But it was Christianity that was perhaps the first successful attempt at a truly universal religion, despite Jesus apparently stating that he was sent only to “the lost sheep of the house of Israel” (Matthew 15:24), meaning that his message was only for the Jewish Israelites. It was Paul who, it could be argued, was the real founder of Christianity not Jesus who universalised both its message and reach. Somehow though, Christianity historically failed to become significantly free of racist overtones. Indeed it has been used to justify the most horrific racist crimes and many churches are still divided along ethnic and racial lines.

Islām seems to have a much better track record when it comes to racism.

“The extinction of race consciousness as between Muslims is one of the outstanding achievements of Islām and in the contemporary world there is, as it happens, a crying need for the propagation of this Islamic virtue…”[10]

Racism and tribalism are intimately connected, and nationalism is merely another form of tribalism. Pre-Islamic Arabian society was highly tribalistic and the Prophet Muḥammad (sall Allāhu ʿalayhi wa sallam) was outspoken against it from the very outset of his preaching.

On his first public announcement he climbed to the top of mount Safa and started calling all the various tribes of Quraish:

From the very outset the message of the Prophet (sall Allāhu ʿalayhi wa sallam) was striking at the very heart of the concept of tribal loyalty whose code dictated that one support one’s tribe right or wrong, but the Messenger of Allah (sall Allāhu ʿalayhi wa sallam) was making it clear that now they would be judged only on the basis of their deeds and levels of piety. Birthright, wealth, lineage, ancestry, all meant nothing in the sight of Allāh!

It was befitting that these words were delivered during the Ḥajj (Islamic pilgrimage) that was to become an abiding manifestation of the brotherhood of man, where all are dressed in two unsewn pieces of cloth, depriving all of emblems of culture, tribe, nationalism, wealth and status. All that remains is humanity united in the same rituals, humbled before God.

The same concept exists in the five daily prayers where the place of merit in the front row is reserved for none. It belongs to those who hasten to it. Shoulder to shoulder, foot to foot the Muslims stand irrespective of colour or status.

The Qur’ān declares the brotherhood of man as all descended from one man and one woman:

“O mankind! We created you from a single [pair] of a male and a female, and made you into nations and tribes, that ye may know each other [not that ye may despise each other]. Verily the most honoured of you in the sight of Allāh is [he who is] the most righteous of you. And Allāh has full knowledge and is well acquainted [with all things].”[11]

And the variation in us is in fact a sign that leads the thinking person to comprehend the munificence of our Creator:

“And among His signs is the creation of the heavens and the earth, and the variations in your languages and your colours: verily in that are signs for those who know.”[12]

No wonder then that:

“No other society has such a record of success in uniting in an equality of status, of opportunity, and of endeavour so many and so varied races of mankind. The great Muslim communities of Africa, India and Indonesia, perhaps also the small community in Japan, show that Islām has still the power to reconcile apparently irreconcilable elements of race and tradition. If ever the opposition of the great societies of the East and West is to be replaced by cooperation, the mediation of Islām is an indispensable condition. In its hands lies very largely the solution of the problem with which Europe is faced in its relation with East.  If they unite, the hope of a peaceful issue is immeasurably enhanced.  But if Europe, by rejecting the cooperation of Islām, throws it into the arms of its rivals, the issue can only be disastrous for both.”[13]

Chairman of the Islamic Education and Research Academy (iERA)