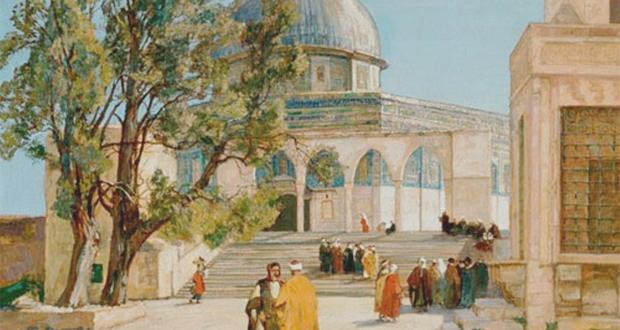 Many calls can be heard that “al-Aqsa is a red-line”; calls and claims which make it seem that this transgression upon the holy land of al-Quds (Jerusalem) is different from all the transgressions that have taken place beforehand. Calls that make it seem that we as an ummah will not take any more of the humiliation, disgrace and subjugation that we have become subject to over the past century. Calls which make it seem that we will stand up finally as one ummah and free ourselves from the shackles of pain and disgrace. Although we hope this to be true and change can clearly be seen on the horizon, in order for our feelings and hopes to translate into reality we need to discuss strategy and means.

To help do so, what better than to turn to the hero of Islam, the Liberator of al-Quds, the leader and warrior respected by Muslim and non-Muslim alike—Salāh al-Dīn al-Ayūbī, may Allāh have mercy upon him. One of the many lessons we find is that although he followed a particular school of thought in ʿAqīdah, he was the head of a collective front of believers, who had their differences in both issues of theology and jurisprudence; they had their mistakes, came from groups with historical disputes and disagreements, but were united in their goal of establishing Allāh’s word and remembrance. They were united against the oppression and injustices being carried out against the masses around them, and they did not let their disagreements hinder them or hold them back.

It is famously mentioned that upon passing by a tent of soldiers who were praying the night prayer our hero Salāh al-Dīn said “through men like these we gain victory”, indicating the mind-set shared by that victorious collective of believers. A person’s practical implementation and relationship with Allāh, the Exalted, is what aids him in securing victory and success—not his theoretical or academic understanding of texts and mastery of textual creeds, regardless of the school of thought he follows.

We find that this was stated by a great reviver of Islam who was himself attributed to being from the founding fathers of the generation which produced Salāh al-Dīn al-Ayūbī; Imām Abā Hāmid al-Ghazāli. He stated in his text Faysal at-Tafriqah, “Indeed anyone who believes that the way to īmān is speculative theology, abstract proofs, and systematic categorisations, is himself guilty of unsanctioned innovation. For īmān in Allāh comes rather from a light which Allāh casts into the hearts of His servants, as a gift and a gratuity from Him.”[1] He also goes on to say, “And the completeness of underlying īmān is ones continual commitment to actions of worship and remembrance of Allāh.”[2]

This has been the difference between those who have made a change and impact and those who have not throughout the history of our ummah, regardless of the school of thought they ascribed to in their theoretical systems of belief. Their īmān has driven them to action, to struggle and strive for the sake of establishing the sanctities and pleasure of Allāh. In regards to this point the great Hanbali jurist and scholar of the heart Ibn al-Qayyim (may Allāh be pleased with him) commented, in his famous biography of the Prophet ﷺ:

“And from the benefits taken from what took place on the day of al-Hudaybiyah, is that if the polytheists, or the people of innovation or the people of immorality or oppression and tyranny were to request something which venerates a sanctity from the sanctities of Allāh, the Exalted, then their request is to be fulfilled, and what they ask for given and they are to be aided in achieving the veneration of Allāh’s sanctities, as aid should be given to that which venerates the sanctity of Allāh, but not towards disbelief and oppression. And they are not to be given aid in other than that (the veneration of sanctities), as anyone who seeks aid in trying to accomplish something which is loved by Allāh is to be responded to, regardless of who they are as long as aiding them does not lead to something disliked by Allāh which is greater than that loved matter they are aiding upon. And this is from the most specific of issues, and the hardest upon the souls.”[3]

What a great sanctity, then, we have before us to unite upon today: al-Quds, the oppression of Islam, Muslims and humanity at large.

We can see that one of the biggest and most destructive issues we face today is disunity. As an ummah since the passing away of the Prophet ﷺ we have fallen in to differences of opinions, mistakes, errors and disputes, but we have always agreed upon the system of Islam, its authority and establishment. This has always been a united front for us, whether a person be Hanafi, Maliki, Shafi’i, Hanbali or Zahiri, whether ascribed to the Athari, Ashari or even Mutazili school of creed, we have always agreed upon the implementation and upkeep of the Sharīʿa’s core symbols and principles. Anyone who denounced it was deemed a heretic and openly rebuked by all groups, and so in a time in which we search for our main source of unity we need look no further than establishing Allāh’s system of sanctities and guidance.

If perfection were the condition for success there should have been no success granted to our ummah after the death of the Prophet ﷺ, yet we find many of the revivers, champions and heroes of Islam were perceived to be mistaken in some affairs by one party or another from our ummah. Their mistakes and shortcomings did not prevent them or those who disagreed with them from aiding them and working with them in their struggles.

Let us take the example of a twig. Naturally it is blemished, full of kinks and perhaps crooked; alone it is weak and easy to break. Its defects are easy to be pointed out. But when tied up with other sticks and twigs like it, they become straightened and strong.

If we were to spend our time pointing out the mistakes of others rather than working with them upon the issues we agree upon, then who is it—in a time in which no authoritative body exists—that has the right to declare what perfection and “correct” is amongst an ummah who have many traditional schools of thought and opinions? Instead, we must come together upon establishing Allāh’s remembrance and not let our differences and mistakes paralyse us.

Our main concern and focus should be on crossing the bridge together, as one body, not determining who has a right to cross the bridge and who does not.

We should take the events taking place in al-Quds to be a milestone, a time in which we assess ourselves and change ourselves as individuals in order to move forward as a collective.

There are many practical steps we can take individually and collectively to help discharge our obligations towards al-Quds. To coincide with the petitions, protests and outward activism, let us remember to take heed of the following:

– Pray the five prayers on time in congregation for the men if possible;

– Pray the voluntary nawāfil before and after the five daily prayers;

– Do our adhkār after Fajr and Asr, and 100 Istighfārs a day or more as per the Sunnah;

– Pray a few units of the night prayer, if not then at least the witr prayer after ʿIshā, asking Allāh to give victory to the resistance in our duʿās;

– Stay away from major sins;

– Ask Allāh to use us and make us from those who give light back to al-Quds;

– Educate ourselves and those around us about Islam.

To conclude, history will remember those names that set out to make a positive change, positive change can only come from positive hearts, not those full of negativity pointing at all others whilst they themselves do nothing.