St George: more like a “radical Islamist” than an English nationalist! 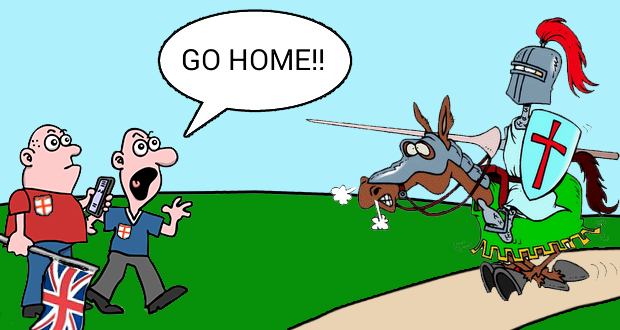 “….and you will certainly find the nearest in friendship to those who believe (to be) those who say: We are Christians; this is because there are priests and monks among them and because they do not behave proudly” [1]

Who is St George?

Not much accurate information is known about George. Historians believe he was born in Cappadocia, a part of modern Turkey, into a noble Christian family in the third century around 270AD, some 300 years before the advent of the final Prophet, Muḥammad (sall Allāhu ʿalayhi wa sallam).[2]

His father was of Turkish descent whilst his mother was a Palestinian from the city of Lud. Lud of course is the city where we know that ʿĪsā (ʿalayhi al-Salām) (Jesus) will kill the Dajjāl (anti-Christ) as the Messenger of Allāh (sall Allāhu ʿalayhi wa sallam) said:

“….Then, the son of Mary will go in pursuit of the Dajjāl, and will overtake him at the gate of Lud , and will kill him.” [3]

George is said to have joined the Roman army, following in his father’s footsteps. When his father died, he and his mother returned to Palestine, and he became an officer in the retinue of Diocletian, the Roman Emperor at the time. It is unclear whether George would have openly declared his faith at this time, however, what we know is that Emperor Diocletian embarked on a systematic terror against all Christian believers.

Before we continue with this story further, let us pause for a moment and consider what the Christians were like at the time of George.

Christianity Pre-Council of Nicea: The Islām of that time?

We know that Constantine was the Emperor at the time. In Constantine’s day, Rome’s official religion was pagan sun-worship — the cult of Sol Invictus, or the Invincible Sun—and Constantine was its head priest. Unfortunately for him, a growing religious turmoil was gripping Rome. Three centuries after ʿĪsā’s (ʿalayhi al-Salām) messengership, his followers had multiplied exponentially. Among the ‘Christians’ of that time were followers who were very similar to the original disciples of ʿĪsā (ʿalayhi al-Salām) i.e. Muslims (worshipping God alone and following the teachings of ʿĪsā as a prophet); alongside a variety of other types of Hellenised Christians with innovated ideas and beliefs about ʿĪsā, including those who began to worship him instead of or in addition to God. The various Christians and pagans began warring, and the conflict grew to such proportions that it threatened to render Rome in two. Constantine decided something had to be done. He decided to unify Rome under a single religion, a Roman Christianity.

Perhaps one of the most important matters to be settled at the Council was the status of ʿĪsā (ʿalayhi al-Salām) who was viewed by many of his early followers as a mortal Prophet. Around this period, the Christian world had many different competing Christological formulae and among them was Nontrinitarianism which rejected the doctrine of the Trinity, namely, the teaching that God is three distinct hypostases or persons who are co-eternal, co-equal, and indivisibly united in one being and believed in the oneness of God.[4]

Constantine of course favoured the view that existed of ʿĪsā (ʿalayhi al-Salām) being the Son of God and tied this in with his beliefs. Historians still marvel at the brilliance with which Constantine converted the sun-worshipping pagans to Christianity. By fusing pagan symbols, dates, and rituals into the growing Christian tradition, he created a kind of hybrid religion that was acceptable to both parties. The vestiges of pagan religion in Christian symbology are undeniable. Constantine’s favoured pagan deity was Sol, the sun god, which he and many other pagan converts identified with ʿĪsā (ʿalayhi al-Salām). Thus, he officially fused Christian celebrations, and pagan celebrations of the sun. The pagan god Mithras—called the ‘Son of God’ – was born on December 25, died, was buried in a rock tomb, and then resurrected in three days. By the way, December 25 is also the birthday of Osiris, Adonis, and Dionysus. Even Christianity’s weekly holy day was borrowed from the pagans. Christianity honoured the Jewish Sabbath of Saturday, but Constantine shifted it to coincide with the pagan’s veneration day of the sun.

Constantine also commissioned and compiled the Bible, which omitted those gospels that spoke of ʿĪsā’s (ʿalayhi al-Salām) human traits and embellished those gospels that made him godlike. The other gospels were outlawed, gathered up, and burned. Anyone who chose the forbidden gospels over Constantine’s version was deemed a heretic. The word heretic derives from that moment in history. The Latin word ‘haereticus’ means ‘choice.’ Those who ‘chose’ the original history of ʿĪsā (ʿalayhi al-Salām) were the world’s first heretics.[5]

George and the Companions of the Cave

The story of the Asḥabul Kahf, ‘Companion of the Cave’ is told in Sūrah (Chapter) 18 of the Qur’ān which takes its name from their story, ‘The Cave’. In it, Allāh tells us about a story where we learn that the believers at that time were a persecuted people and, as a result, a group of youth left their town with their dog and hid and sheltered themselves in a cave in a mountain fleeing from the persecution; much like how the Messenger of Allāh (sall Allāhu ʿalayhi wa sallam) and Abū Bakr (raḍiy Allāhu ʿanhu) sought refuge in the Cave of Thawr fleeing from the persecution of the Quraish. The youth said:

“Our Lord is the Lord of the heavens and the earth, never shall we call upon any ilāh (god) other than Him; if we did, we should indeed have uttered an enormity in disbelief. These our people have taken for worship āliha (gods) other than Him (Allāh). Why do they not bring for them a clear authority? And who does more wrong than he who invents a lie against Allāh”.[6]

They withdrew to the cave, fell asleep and remained asleep for some generations or centuries. When they awoke from their long sleep, they still thought of the world in which they had previously lived when they had slept. They had no idea of the duration of time. But when one of them went to the town to purchase provisions, he found that the whole world had changed. The religion was no longer persecuted, His dress and speech, and the money which he brought, seemed to belong to another world. This attracted attention and thus, their story and miracle was made known to all by Allāh.

It is well known in Islām that the youth were followers of ʿĪsā (ʿalayhi al-Salām), who were Muslims (i.e. those who submitted their will to Allāh). In fact, the Sūrah starts with a message to the Christians in the opening verses wherein we find:

“And warn those who say Allāh has taken a son, they have no knowledge of it, nor had their fathers, a grievous word it is that comes out of their mouths, they speak nothing but a lie” [7]

Now there is a similar story in Christianity about the sleepers of Ephesus where it is taught that a number of youths went into hiding during the tyrant rule of none other than Diocletian. We can read this account in Edward Gibbon’s monumental “The rise and fall of the Roman Empire” and in other western works. If this is correct, then it places St George and the Companions of the Cave in the same period and given that this was known as the Great Persecution, it adds credence to the possibility that the Companions of the Cave were fleeing from the same persecution, and Allāh knows best.

It is well known that Emperor Diocletian issued a decree requiring public sacrifice which meant that Christians were compelled to sacrifice to Roman gods or face imprisonment and execution. Diocletian’s campaign has come to be known as the “Great Persecution”, which has been noted as the most severe persecution of Christians in Roman history.  And whilst some, such as perhaps the Companions of the Cave escaped, others such as George did not.[8]

When the persecution of the monotheistic Christians began, George openly declared that he was a Christian and that he would not persecute his co-religionists.[9] Despite being cruelly tortured at the order of the emperor, George refused to denounce his faith in the oneness of God and venerate the Roman idols. His actions saw him dragged through the streets of Palestine and beheaded in 303 AD.[10]

So he was a religious fundamentalist immigrant who refused to accept his country’s ‘values’, that racists love?

Not only was St George a Turkish-Arab, but likely a believer in tawḥīd, of the One true God and who refused to associate partners with Him like the Companions of the Cave who were Muslims.

St George shunned and refused to believe in paganism and idolatry, which is unfortunately, associated much with modern day Christianity and it is for this reason that, if St George was alive today, he would most likely find idolising ʿĪsā (ʿalayhi al-Salām) a strange practice indeed, and would, conversely, find familiarity with the teachings of Islām.

Being of Turkish and Palestinian Arab descent, he would have been the perfect captain for the Gaza Flotilla, the Mavi Marmara (the Turkish ship which sought to break the siege of Gaza in 2010) and he would no doubt champion the cause of his fellow natives against their tyrannical and oppressive rulers, the Zionist entity of Israel.

There is a particularly delightful irony of far right groups in the UK venerating him as a saint. Sometimes the extent of racists’ stupidity is nothing short of hilarious to onlookers. They erroneously claim to be the true heirs of St George, but it is clear that if St George was alive today, they would reject him, call him a foreigner, and tell him to go back to his own country. In fact, if they saw him drowning in the Mediterranean Sea like 800+ poor souls recently, then they would have probably also called him a ‘cockroach’ and refused to rescue him.[11]

[4] Ehrman, Bart. The Lost Christianities: The Battles for Scripture and the Faiths We Never Knew.