Are Milkshakes the new British bullet? 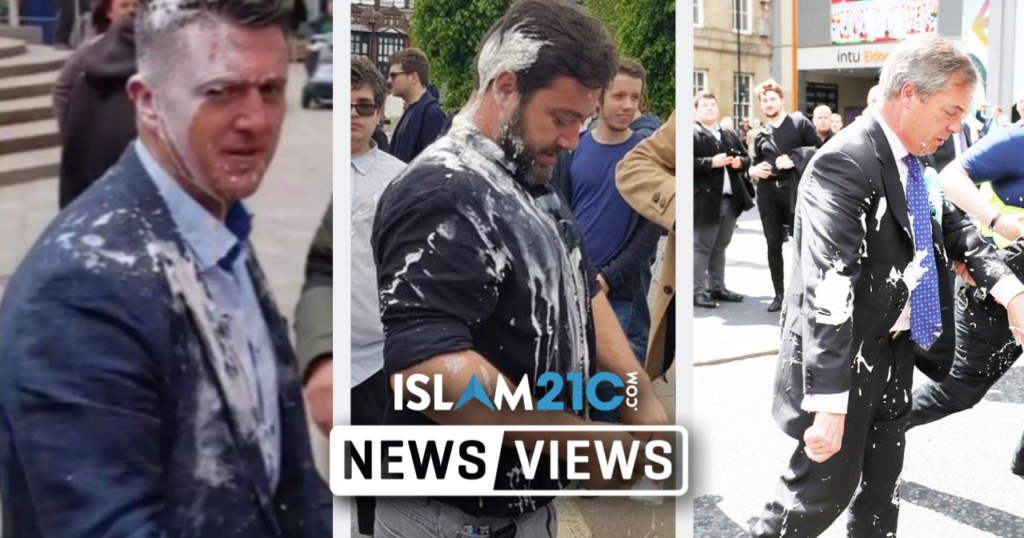 Nigel Farage has become the latest political figure to be hit by the new craze of dosing politicians in milkshakes.

A man has been arrested on suspicion of common assault for the attack carried out this morning in Newcastle city centre.

The 32-year-old said he did not regret his actions, saying:

“It’s a right of protest against people like him.” [1]

He further made mention of the flavour of his tasty “weapon”, telling reporters it was a banana and salted caramel milkshake. He said:

“I was quite looking forward to it, but I think it went on a better purpose.” [1]

Farage can be seen muttering “it’s complete failure” after being on the milkshake’s receiving end, before his security team whisked him away.

The banana and salted caramel attack was caught on camera and uploaded across social media:

This is the third case where far-right figures have been attacked with refrigerated beverages.

UKIP candidate Carl Benjamin got the milkshake treatment yesterday during a visit to Salisbury.

However, it was Danyaal Mahmud, a customer services advisor from Blackburn, who started the trend after a tense altercation with former EDL leader, Tommy Robinson.

Tommy Robinson having his “rivers of milkshake” moment. pic.twitter.com/wvO58ujvmu

In revelation of this, Dr. Asim Qureshi tweeted:

While another user said:

“I have a dream that one day children will not be judged by the colour of their skin, but by the flavour of their milkshake.”#MoreMilkshakeLessRacism #Milkshake pic.twitter.com/kJp2Z7fkvE

And fast food chain, Burger King, got in on the action:

Disclaimer: Islam21c does not condone the wastage of food, nor does it encourage the delivery of milkshakes to far-right extremists in this manner or any political rival for that matter.