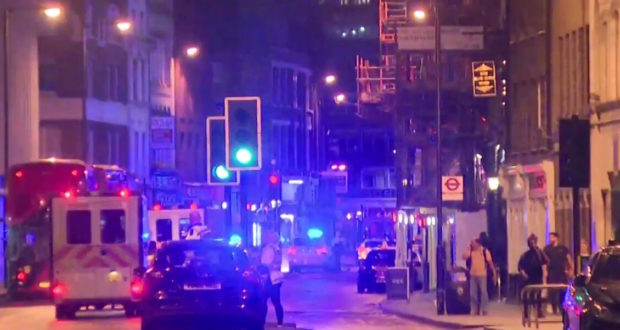 -Developing news refresh this page to get updated news-

If you were near the location where the incident took place, please contact us on [email protected]

The man who took the picture of one of the London attackers with canisters strapped to his body on what he saw https://t.co/WwOYIyZ8hV pic.twitter.com/IZaGDKBtlA

BREAKING NEWSPolice have reported 3 separate incidents across London tonight with multiple injuries.Whether you are…

Our latest statement about the incident in #LondonBridge. We have taken at least 20 patients to six hospitals across London. pic.twitter.com/eDRdk48CBu

After an hour of being stuck in the #londonbridge area and told to run by police, Muslim shopkeepers offered me food and a place to stay.

Killing innocents on streets is not honourable, courageous or virtuous. Neither is more -intended-anti-Muslim backlash. #Londonbridge

As we respond to a number of incidents in London we ask that you only call us in a genuine emergency. You can call111 for medical assistance pic.twitter.com/V6avVT5i5O

Please continue to avoid #LondonBridge & #BoroughMarket if you can. Please do not call 999 unless it is an emergency.

My statement on the cowardly terrorist attack in London tonight: https://t.co/PaGXogN60N
Please continue to follow @metpoliceuk for updates pic.twitter.com/AcGaju2Svp

Brutal and shocking incidents reported in London. My thoughts are with the victims and their families. Thank you to the emergency services.

Read and re-tweet earlier tweets, let's put an end to the abusing of the victims!#LondonAttack #SecondaryVictimshttps://t.co/nAxC5ZUjhB

"It was very scary" they said, fearing for safety amidst verbal Islamophobic abuses!#LondonBridge #SecondaryVictimshttps://t.co/nAxC5ZUjhB

They [Muslim Sisters] were told to 'Go back home' and eyed on as 'terrorists'!#LondonBridge #SecondaryVictimshttps://t.co/nAxC5ZUjhB

Muslim sisters fleeing the area to safety encountered abuses and no one defended them! #Unacceptable #LondonBridgehttps://t.co/nAxC5ZUjhB

Muslim sisters received verbal abuses hurled at them for 'cancelled trains' during this incident! #LondonBridgehttps://t.co/8QO6gYyLcl

Our thoughts are with the victims of; this incident and the aftermath of the incident! #LondonBridgehttps://t.co/nAxC5ZUjhB

The Metropolitan Police say they are dealing with an incident on the bridge.

We are aware of reports on social media. We will release facts when we can – our info must be accurate #LondonBridge

Multiple casualties have been confirmed after a van reportedly ploughed into pedestrians on London Bridge.

The vehicle mounted the pavement at the scene in central London this evening, according to shocked witnesses.

Transport for London said the bridge has been closed in both directions due to a “major police incident”. Bus routes were being diverted.

Currently little is known about who is responsible and their motives besides speculative reports based on unconfirmed witness accounts. There have been no official or confirmed links to suggest this was a terrorist attack. Calls on social media are being made for unity over hate. More updates to follow on this breaking story.

Islamophobes will leverage this incident for their own hegemony! We encourage unity against hate #LondonBridge https://t.co/nAxC5ZUjhB

2017-06-03
+Editor
Previous: Five more school leaders cleared as yet another “Trojan Horse” case thrown out
Next: Condolences to our Chief Editor on his father’s passing