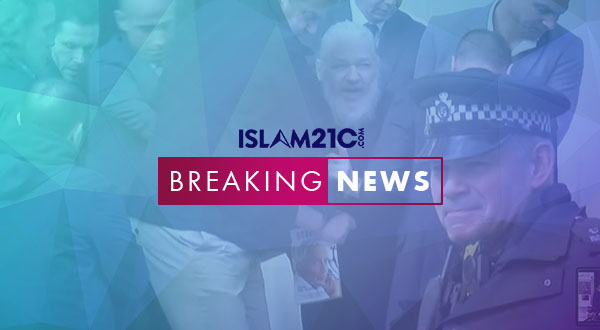 WikiLeaks founder Julian Assange was arrested today in the embassy in London. He took refuge there seven years ago after he launched the international non-profit organisation that published secret information on some alleged crimes and abuses committed by many governments around the globe.

Mr Assange, sporting a long white beard, can be seen shouting as he was carried out and hauled into a police van in London earlier today.

According to the US justice department, Assange could be looking to face five years in jail, after issuing an extradition request for him “in connection with a federal charge of conspiracy to commit computer intrusion for agreeing to break a password to a classified US government computer”.[1]

A statement today confirmed that it cited court documents, that were previously unsealed, to show the charge relates to “Assange’s alleged role in one of the largest compromises of classified information in the history of the United States”.[1]

The Obama DOJ concluded that prosecuting WikiLeaks and Assange for publishing documents would pose a grave threat to press freedom https://t.co/iyZMRhSu0Q – Dems who spent 2 years feigning concerns over press freedom but who now cheer the Trump DOJ for this are beneath contempt: https://t.co/wi6vdQPVyo

London – Wikileaks founder and international whistleblower Julian Assange must not be extradited to the United States following his arrest and forceful removal by the Metropolitan Police, upon request by the Ecuadorian Embassy, where he has been seeking refuge for the last 7 years.

The work that Assange and Wikileaks produced has reshaped the debate about the abuses of powerful states, especially the US, in the context of the War on Terror. Without such courageous work, the awareness of unspeakable crimes, let alone the small semblance of accountability that we have seen, would have never happened.

“This is a witch hunt against whistleblowers and those who are seeking accountability from the powerful. The UK-US extradition treaty which has always been ripe for abuse, will be used once again to silence voices of dissent.”

“Assange must not be extradited to the US. He is a truth-teller and one that has sacrificed his own liberty to shed light on the abuses of the world’s most powerful states. If no one is above the law as Sajid Javid boasted, then surely we should be supporting Assange not arresting him.” [2]

The @ACLU's point is vital: if the US can force the arrest and then extradite foreigners like Assange on foreign soil for publishing docs, what prevents China or Iran or, you know, Russia for doing the same to US journalists who publish secrets about them? https://t.co/31WfYg7zrC

Edward Snowden, the infamous American whistleblower who copied and leaked highly classified information in 2013, commented that the arrest for Julian Assange is a “dark moment for press freedom” [3]