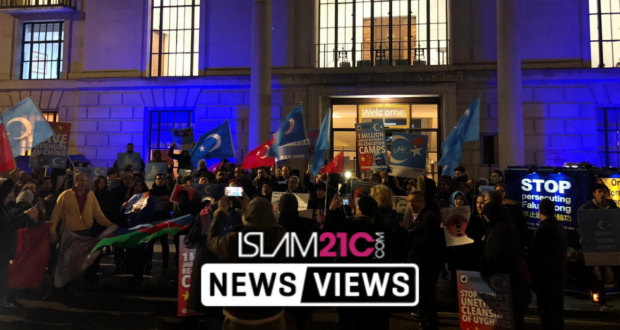 Demonstrations were held outside the Chinese embassy in London against China’s mass oppression against the Uyghur Muslim minority in the Xinjiang Autonomous Region, also known as East Turkestan.

The protest on Tuesday was organised by the International Observatory of Human Rights (IOHR) and attended by over one hundred people who chanted slogans such as “Free Free Turkestan!” and called on the Chinese government to shut down the concentration camps in which over 1 million Uyghur Muslims are being detained.

Amidst the waving of East Turkestan and Turkish flags and the loud chants calling for Uyghur justice, an IOHR representative said “we are gathered here today to call on the Chinese government to end its systematic oppression against the Uighur Muslim ethnic minority of Xinjiang”.

“This demonstration and many others should remind the Chinese government that the world knows what’s going on and the Uighur Muslims will not suffer in silence or in loneliness. We will stand by them” he added.

Ferida, a member of the Uyghur diaspora in the UK, said “it is zulum (oppression)” when asked about Chinese actions against Uyghur Muslims. “They are being punished because they follow a belief that is different to Xi and his party. That is their only crime: their belief” she said, referring to Xi Jingping, China’s authoritarian leader and head of the Communist Party.

According to Amnesty International, up to one million Uyghurs have been detained in concentration camps or ‘re-education centres’ as China refers to them and face physical and mental torture as they are forced to renounce their religion and pledge loyalty to the Communist Party. [1]

In a report published by Human Rights Watch, the Chinese government have carried out these repressive policies for many years against the Uyghur people and the mass detention of Uyghur Muslims in concentration camps is the latest in a campaign of oppression and repression. [2]

Chinese authorities have repeatedly stated that they are detaining people accused of minor crimes and that they are being held in centres of re-education where they enjoy their time and are ‘grateful’ to be there. [3]

Human rights groups have accused the Chinese government of engaging in a campaign of ethnic cleansing by destroying Uyghur Muslim identity and culture and banning them from practicing their religion. [4]